Imagine if everything in your life suddenly got 7% better. Your paycheck was 7% bigger. While your bills were 7% lower. Your jokes started getting 7% more laughs. You got 7% more epic drops in your favorite video games. Your intelligence is up by 7% and you are falling for 7% less fake news. Your food tastes 7% better, and here’s the kicker, you can eat 7% more of it without gaining weight.

7% doesn’t sound like much, but across the board, it adds up.

I feel like Paizo–the company behind the Pathfinder RPG–gets incrementally better year after year. I can’t scientifically confirm it’s a 7% gain, but it’s clear that the quality gains are adding up. Nowhere is this more true than in Curse of the Crimson Throne.

Curse of the Crimson Throne was the 2nd release in the Pathfinder Adventure Path series way back in March 2008 as a series of 6 paperback adventure books. But in 2016 an updated hardcover compilation of the Curse of the Crimson throne was released, using the updated Pathfinder Roleplaying Game rules. It’s this new hardcover that we’ll review today.

Review of Curse of the Crimson Throne 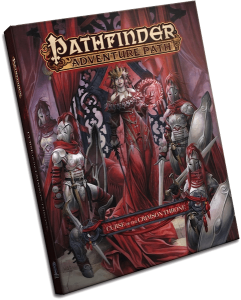 Curse of the Crimson Throne is an adventure set in the city of Korvosa, a major river port city in the Pathfinder world of Golarion. Korvosa is ruled by kings and queens who sit upon the Crimson Throne, which is beset by superstition and rumors of a curse. Characters advance from 1st to 17th level as they become the heroes of a story that pits them against the current queen who is twisted in her quest for immortality.

Being that it is a Pathfinder Adventure Path, the nearly 500 pages of Curse of the Crimson Throne is organized into 6 chapters.

Chapter 1: Edge of Anarchy takes characters from 1st to 3rd level and is among the best opening stories to any roleplaying adventure I’ve run across. It’s a story that plays as a fantasy mashup of the movies Signs and Se7en, and it certainly works to both introduce major NPCs while also engaging the characters into the drama of Korvosa. 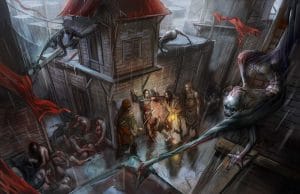 Chapter 2: Seven Days to the Grave has PCs dashing across rooftops and plundering sunken ships in order prevent the outbreak of a deadly disease that was manufactured to break the resolve of Korvosa’s most vulnerable citizens, and threatens to fully overwhelm the clerics of the city.

Chapter 3: Escape from Old Korvosa has the PCs at 8th level, where they begin to dig deeper into the secrets and double-crosses that threaten the city. It’s a chapter rife with assassins, organized crime, and a vigilante that I’d swear takes cues from Daredevil patrolling the rooftops of Hell’s Kitchen. 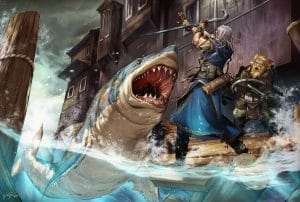 Chapter 4: A History of Ashes takes the PCs outside of Korvosa into the badlands of Golarion in order to seek wisdom from native peoples who have guarded the secrets of Korvosa for generations.

Chapter 5: Skeletons of Scarwall has the PCs hunt down an ancient weapon that alone holds the power to topple the mad queen.

In Chapter 6: Crown of Fangs, the players take the fight directly to the queen and her minions. It’s a boss fight that provides a satisfying conclusion to a journey that really allows players an opportunity to immerse themselves in the story of a city.

Review of Curse of the Crimson Throne

It’s a wonderfully compelling story. Curse of the Crimson Throne is for anyone who has ever glanced down an alley and wondered what type of shady shenanigans went on down there. The setting drips with imagination, intrigue, and interesting characters.

The book is worth it for chapter 1 alone. I playtested the first few parts with several other Nerds on Earth writers and I was pleased with the level of detail that is provided, not to hem you in, mind you, but to create a vibrant city where it feels like anything might happen.

Add in severed heads and serial killers, and any fan of CSI or Bones would like to play through this adventure.

The appendices provide excellent resource material. In particular, you should absolutely read the Gazetteer of Korvosa before you even read the adventure. I gotta say, some of my favorite parts of roleplaying games are the maps and shopping for gear, so having a fully fleshed-out city was great fun that made the whole story come alive.

Chapters 4 and 5 provide opportunities to make a decision. An entire adventure in one fantasy city can begin to feel claustrophobic, so I understand the inclusion of chapter 4, which provides an opportunity for the adventurers to “get some air” outside the city walls. Unfortunately, while the individual adventures during this part of the book are interesting, they aren’t that interesting.

In addition, the fetch quest of chapter 5 suffers from the same affliction. While it is narratively fitting and a fine dungeon crawl, it’s not that engaging and ultimately feels stretched out. I wondered as I read the book if it was necessary to go all the way to level 17. The big bad showdown in the final chapter was a fitting farewell, but an industrious dungeon master could scale that boss fight back to level 12 and simply shorten large portions of the middle chapters.

Curse of the Crimson Throne is physical proof that Paizo is getting better and better. By at least 7% per year! Now a company 10 years into writing and producing roleplaying adventures, Paizo is firing on all cylinders. They got their start by showing that they had strong instincts for storytelling, a thoughtful approach to game design and mechanics, and a willingness to risk new business models in the RPG industry. Paizo is now undeniably at the top of their game.

We can only do so much as nerds. But take care of what you can, like playing 7% more RPGs and increasing your support of Paizo and Nerds on Earth by increasing your shares by 7%. And if you are itching for an adventure, I’d highly recommend Curse of the Crimson Throne. You can get it here.

[Disclosure: Paizo provided Nerds on Earth a complimentary copy of Curse of the Crimson Throne for review.]