By Will Sansbury On Jan 21, 2017 Last updated Jan 20, 2017
Share TwitterReddItPinterestFacebookEmailPrint

I travel a fair bit for work, and I’ve grown accustomed to seeing calendar invites for evening events at places that sound a lot cooler than they are. When one came through recently for a place that calls itself “The Pinball Hall of Fame,” I was skeptical. After long, intense days of meetings, I wanted a glass of wine, a quiet hotel room, and mindless TV, not a sad grown-up imitation of Chuck E. Cheese.

I was wrong. After three hours at The Silverball Museum in Delray Beach, FL, I wasn’t ready to leave. The place was full of vintage pinball machines, shuffleboard tables, and skeeball games, all of which you could play whenever you wanted, as often as you wanted, for $10/hour or $25 for the day.

Chief among my nerdy obsession (and, indeed, how I feed my family) is graphic design, so I spent as much time examining each machine’s incredible artwork as I did playing. Each machine gave you a sense of what the world was like when it was popular, starting back in the 1950s. 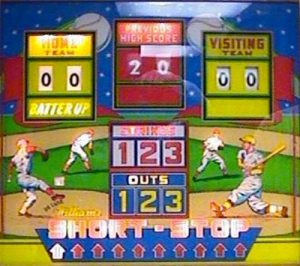 In the decades after World War II, American life seemed to stabilize for a while. From its subject of America’s favorite pastime to the extremely straightforward mechanics, the machine clearly came from a simpler age. 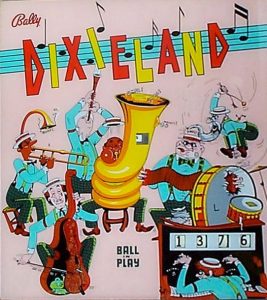 Popular at the height of the Civil Rights movement, this machine featured a Hanna-Barbera-esque depiction of a New Orleans jazz band (that my modern eyes couldn’t read as innocent). 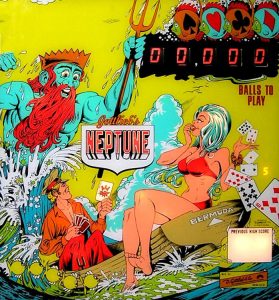 This machine machine struck a particularly nostalgic chord for me. The machine, which is only 6 months older than I am, is the embodiment of the golden age of science fiction and fantasy. From its Scooby-Doo aesthetic to its Atlantean theme, it reminded me instantly of the pulp novels and B-grade movies that my dad loves and that became the foundation of my nerdiness. 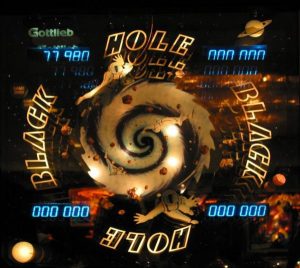 You can’t miss the excitement of the space race and the belief that science and technology can solve every problem faced by humankind when you play this one. The machine is a double-decker engineering marvel that I can’t do justice with a description, so just watch for yourself. 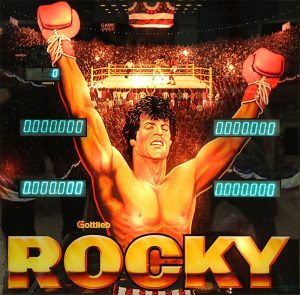 I was humming Eye of the Tiger as I bought hook, line, and sinker into that classic American tale of the heroic underdog. And I was quite the underdog, as this machine made you fight more than most to see a decent score.

Star Trek: The Next Generation (1993, Williams) 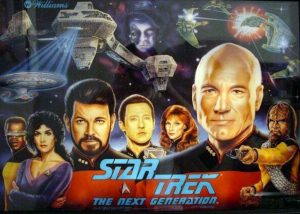 If I had to describe this game in one word, it’d be this: ENGAGING. (Yeah, I went there. I’m only a little sorry.) TNG captured our attention at a time when America was only just beginning to recover from the Challenger disaster.  As technology advanced, we found ourselves looking again to the skies (though, sadly, more through the lenses of fiction than of actual science and exploration). And just as Picard’s Federation had better tech than Kirk’s, this machine features a dazzling array of bells and whistles that were simply impossible in the decades before.

Since that night at Silverball, I’ve thought more about pinball than I did in all my prior years combined. Something about that place, and the way each machine captured a moment in our history like a prehistoric bug in amber, has captured my imagination. I’ve been learning more about pinball machines in general, and digging into the specifics of each machine (thanks, Internet Pinball Database!). I’ve set up alerts for when pinball machines might pop up for sale locally. I’ve daydreamed about framing out that unfinished corner of my basement to create my own personal arcade.

What I’ve been stewing on most, though, is a life lesson from an unlikely place. For every one of these pinball machines, from the Evel Knievel to KISS to Corvette, there was a moment in time when it was the single coolest pinball machine on earth. While that’s not true for any of them anymore, each still stands as proud and as committed to what it’s about as it ever was.

I want to be more like these machines: even if the world starts to point and laugh and say that my nerdy passions are falling out of style, I want to be a nerd anyway.