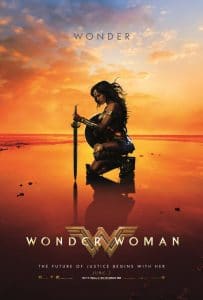 DC Comics has struggled to put out a meaningful, successful film since the earliest of the Christopher Nolan Batman films. Though they have been attempting to let Zack Synder take their intellectual properties and create something that is meaningful, lasting and that fans love. And, to be honest, it hasn’t worked.

But in last summer’s Batman versus Superman film, there was a beacon of hope: Wonder Woman.

Quietly, people began to talk about how Gal Godot had a screen presence that was unexpected; she was largely known for only being eye candy in the 4th Fast and the Furious film and a larger role in the 5th and 6th films. But the musical background, the sly smile she gave at Doomsday’s attack, and holding her own with Batman and Superman on screen, some people began to have hope.

That hope was realized in this summer’s Wonder Woman.

Directed by Patty Jenkins, Wonder Woman does an amazing work in both telling an origin story that is also entirely relevant to today. Jenkins is the first woman to be given the director’s seat on a major superhero film from either Marvel or DC. And some people were surprised, which is disappointing, as Jenkins had directed Charlize Theron to an Academy Award a decade ago in the film Monster. Since then, she has been hard at work, directing in a variety of acclaimed television shows. And after seeing this film, she was the best choice. 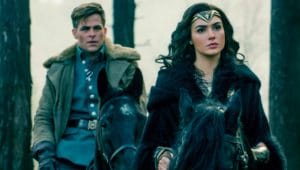 The cast of this film is stellar. While the sounding crew that winds up accompanying the two main characters is interesting and do well with their parts. Gal Godot as Wonder Woman and Chris Pine as Steve Trevor work to do stellar work in what could be difficult parts.

Gal’s Princess Diana has the task of being a strong, fierce, determined warrior and also someone who is new to this strange world that Trevor carries her to.

Pine’s work is amazing as well; in another movie with a male lead, Pine is playing the “female” sidekick. But he flourishes in the role. His Trevor is both determined and less powerful than this woman he now accompanies. He is both honorable and amazed by her beauty and her strength. At times, he is exasperated at how she doesn’t understand how the world and war in particular works; but he also is willing to keep accompanying her and serve in whatever way he can.

Historically, World War I as a setting is an interesting choice. It allows us to understand the magnitude of war without suddenly giving us an easy out of rightfully hating the Nazis and fighting them. Some may miss the distinction that this setting gives but I think it is strong. And through Trevor, we get a sense of how the world felt in that time: everything was falling apart and millions were dying because of it. The setting also shows the horrors of chemical warfare, which, unfortunately was a reality of that global conflict. 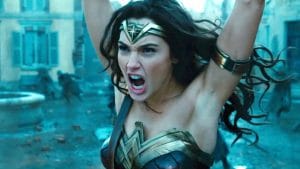 However, it isn’t a perfect film. The third act has the problem that every superhero movie with the possible exception of The Avengers has had: it just hits a wall with its villain and story. Jenkins’ story and script show themselves well in this moment but it is flawed. We hit the third act wall and wind up in the same epic fight in the dark that feels like every other epic fight in the dark. There is a core conflict there that gives it a different stakes than previous films; I held my breath as I worried we would discover that she was related to someone named “Martha” and I would have to assault the people near me in a rage.

Famously, Geoff Johns, who has long been thought of as one of DC Comics’ best writers and is now one of their heads of entertainment, led a discussion about how each of the main characters of DC could be summed up in one word. Where Batman was “Justice”, Wonder Woman is “Love” and that decision and flare shine brightly in what has otherwise been a dark, bleak and unsuccessful DC Comics movie universe. Wonder Woman gets 9 out of 10 Nerds and I can’t recommend it highly enough!

Who Blames The Watchmen: Why DC’s Inability to Release Their Past is Killing…