When the bean counters closed the books at the end of 2016, they found that the board gaming industry had seen 8 straight years of growth. Thanks, Obama.

In fact, the hobby board game industry grew over 10% in 2016. But can board games see a 9th year of 10% growth or will the glut of new games in 2017 finally be more than the market can support?

Well, there are some smoking hot board games that are making waves, shooting up the charts, and mixing metaphors in early 2017. Some have already been released, while others are set to debut before year’s end. Here are 7 of them, organized in a list for your enjoyment:

7. Starfinder. Fine, I cheated right out of the gate, as Starfinder is a pen and paper roleplaying game and not a board game. But I’m not leaving Starfinder off a 2017 hotness list, I’ll tell you that.

Starfinder is ‘Pathfinder in space.’ Us writers at Nerds on Earth are so excited for Starfinder that we launched a podcast for it, despite the game being unreleased. It’s clear that Paizo is going to support the RPG well (including organized play, an Adventure Path, etc.), so it will be a hot commodity around its August 2017 release.

6. Rising Sun. If you want a thematic board game that is essentially a big box full of the coolest miniatures you’ve ever seen, then you shouldn’t look any further than CMON.

Rising Sun is set in legendary feudal Japan and features mysterious Kami. Players battle, use politics to further their cause, negotiate to seek the most profitable alliances, worship the Kami to gain favor, or recruit monsters out of legend to bolster their forces.

Rising Sun just wrapped up their Kickstarter, which saw over 30,000 pledges total over 4 million dollars.  So Rising Sun has certainly been one of the hot topics of discussion from early 2017. The problem is that the game won’t actually ship in this calendar year.

Still, we think it has enough enthusiasm and momentum that its shadow will still loom over most releases this year.

5. Gloomhaven. Speaking of Kickstarters, Gloomhaven was another monster of a Kickstarter. The difference is that Gloomhaven came out of nowhere to take the gaming community by storm, meaning that the popular demand vastly outstripped supply.

So the 2nd printing Kickstarter just concluded (you better bet I’m getting my copy along with 32,000 others who pledged for the 2nd printing) and those are scheduled to drop in August of this year. (If you want it now, you’ll pay crazy prices!)

Gloomhaven is a legacy game, meaning it has a persistent story that changes the game as it progresses. Drop a pin in this. 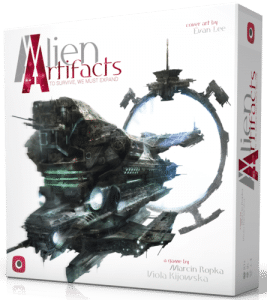 4. Alien Artifacts. This is the game that might have the least marketing hype associated with it at this point, but that enthusiasm is absolutely simmering beneath the surface, as it’s a release from the excellent Portal Games.

Alien Artifacts is a 4x-style card game in which you play as an interplanetary corporation, sending your research vessels into uncharted space to expand your knowledge and power. You build your ship, research tech, and explore the galaxy, all by drafting cards.

If it lands well, this is the type of game that can have near unlimited expansions to further build out the game. I’m really looking forward to it. It also drops in August 2017, just in time for GenCon. 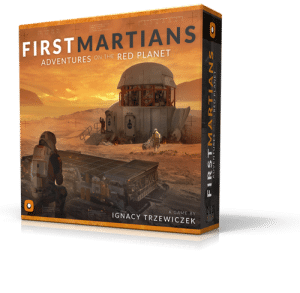 3. First Martians. This is the second straight Portal Games release on this list and would have been #1, had it not been for the strength of the next two.

You can think of First Martians as Robinson Crusoe on Mars. Re-theming the mechanics of that fantastic game, First Martians starts out with a killer foundation, plus adds from there. It will pit players against the hostile Martian environment and a whole host of new adventures and challenges. The experience is further enhanced with an integrated app that maintains the balance of the game.

Players have the option of taking it on as a series of separate games or in a custom campaign mode where each successive game builds on the last, or even in an open world mode in which they are free to roam about the Martian surface and explore for as long as they can survive.

It’s going to be cool. Preorders should arrive this Summer, with a general street date probably after GenCon (August 2017). Terraforming Mars had that same fantastic Martian survival theme, but First Martians will be the game to beat, IMHO, and it’s certainly one of the hot board games of 2017.

2. Pandemic Legacy Season 2. I mentioned that we’d come back to Legacy games (co-operative story-driven board games), and Pandemic Legacy is the granddady of them all, to the point that it is rated the #1 board game in the world on Board Game Geek.

My wife and I played through all 12 months of Pandemic Legacy Season 1, so we’re super-stoked for season 2. The word is that the game is flipped. Whereas Season 1 showed the entire board and a wide-ranging plague, early spoilers are saying that Season 2 will focus on a small geographic area and the game progresses outward. We’ll see.

Massive Darkness is a dungeon crawl in a box, where players use map tiles to set up different story adventures. There is no game master. Instead, players take their heroes on a series of quests where they’ll face enemies that range from mobs of evil dwarves to gargantuan demons and spiders. Heroes will acquire new skills throughout the campaign and find loot to equip themselves, so that they’ll level up.

As you can tell, I’m a big dumb animal who loves thematic smashy games with lots of miniatures and a campaign-like story. So there are literally hundreds of other board games that have released or will be released in 2017. I know I’ll be getting the above 7, but I suspect I’ll grab many more as well.

Let’s talk board games: An Interview with Jamey…