Then my cousin Jason comes in at 6’6″, 360 pounds of bone-cracking barbarian beast. He’s also a professional bowler, which is completely beside the point, so I don’t know why I told you that. What I am getting at is my cousin Jason is a GIANT of a man. Yet despite his considerable size and dexterous bowling, he’s no match for Storm King’s Thunder, Dungeons & Dragon’s new 256 page adventure. 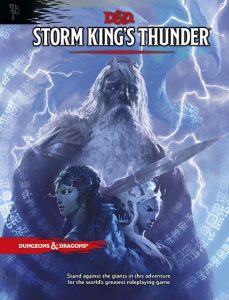 The inspiration for the story of Storm King’s Thunder is an old one. As old as Shakespeare, in fact, as the family drama and political duplicitousness that is found within the ruling house of storm giants is wonderfully reminiscent of King Lear. This adds up to roleplaying and character alliances in this adventure that are chock full of opportunity, so invite a bard to the party.

Giants are riled up all over the Forgotten Realms due to the ordning, a caste structure that Giants adhere to that allows them to peacefully co-exist with one another and with small folk (like me). But events by dragons (the natural enemies of giants) and small folk have upset the gods of the giants. So they shattered the ordning, allowing all sorts of heck to break loose.

To understand the chaos that came for the giants losing structure, I invite you to imagine my daughter’s pre-school class. Having a wonderfully talented teacher, it was routine to see the entire class of 4-year-olds standing peacefully and harmoniously in line together. Not a single one of them were out of place or poking one another. Now imagine a piñata was just busted open and that same class of 4-years-olds are jostling in a crazed scramble to gobble up all the Tootsie Rolls that are now scattered across the ground. That is the chaos wrought by the shattering of the ordning, and that’s why the Forgotten Realms needs a fresh crop of level 1 heroes.

This great upheaval is introduced in chapter 1 when PCs find themselves in the town of Nightstone, not long after a floating cloud giant castle decimated it. This does two things: 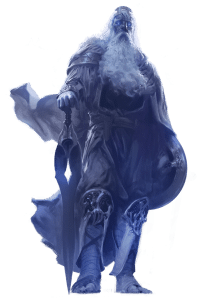 Chapter 2 invites 5th level characters to protect one of three settlements in the Forgotten Realms from an invasion by various types of giants. Then chapter 3 blows the doors wide open as it is 50 pages of setting material that would work well alongside the Sword Coast Adventurers Guide. This allows characters to take the adventure pretty much anywhere they can point to on a map. Put a pin in this, because we’ll come back to it.

Chapter 4 creatively uses an oracle to set up an expedition dump that refocuses and deepens the adventure. Even the squiggliest and easily distracted groups will be neck-deep invested in the adventure after this point.

Chapters 5 through 10 sets up encounters with the “big bad” of each of the major giant types: hill, stone, frost, fire, cloud, and storm. There is wonderful variety among the different types of encounters and lairs, with the whole section increases the “globe-trotting” feel of the book. There are some real creative moments here as well, but rather than heavily spoil them for you, I’ll simply bullet point a few highlights:

Chapter 11 continues what is an exciting romp, taking the players on a hunt to free Hekaton, the captured king of the storm giants. Players will have to chase down a boat shaped like a squid and potentially battle the Kraken in order to free King Hekaton.

Chapter 12 concludes the adventure. Players find themselves allied with giants in a knock-down-drag-out fight in a dragon lair. Does that sound exciting to you? It does to me too!

Storm King’s Thunder is an open-ended romp of an adventure that is filled with intrigue and pulpy adventure. But before I get to what I feel is the spiritual core of the book, I want to share a few assorted thoughts with you.

Storm King’s Thunder has a storyline that is so engrossing and entertaining it could easily be a book that is read, and not played. But the playability of the adventure is the #2 thing that stood out to me. It is crystal clear that the creators put blood and sweat into the book so that it would be played.

The first thing you’ll find after the table of contents is a dramatis personae that lists all the main characters for the adventure. The entire adventure is concisely summarized and that leads into a flowchart that outlined the potential paths players could take. The glorious flowchart warmed this nerd’s heart and illustrates my point: SKT is purposely laid out in a clear and logical way. There are notes, tips, and suggestions galore, all of which make life easier for a dungeon master running the adventure. It’s maybe the most playable book yet.

But the #1 thing that stood out to me was how SKT could be played. In the introduction there are a couple of paragraphs that I think serve as the thesis for the book, and taking them to heart is critical to really understanding how SKT could be approached by gaming groups.

Those two paragraphs basically beg groups to approach Storm King’s Thunder as part of a larger story that coincides with Lost Mine of Phandelver, that was included in the D&D Starter Set, or the larger Hoard of the Dragon Queen and Princes of the Apocalypse adventures. In fact, Appendix A gives wonderful hints at how to link several adventures together into one big epic storyline.

This is a testament to the D&D publishing strategy. Care has been taken in their stories. They haven’t just rushed out a stack of one-off throwaway adventures; they are creating lore.

And Storm King’s Thunder is the glue to that larger created storyline. SKT has players jet set all across the Sword Coast, from the barbarian controlled north, to the depths of the sea, across farmlands guarded by talking trees, up to castles in the sky, all before laying siege to a duplicitous dragon’s lair. And if you wish, all this is to be done while jumping in and out of the other D&D adventures as well.

Whether it’s frost giants, Jolly Green Giant, Andre the Giant, or my cousin Jason, our culture has long been obsessed with the larger than life. For that reason alone, Storm King’s Thunder begins with something great going for it: playing a game with giants is darned good fun. And just like David v. Goliath, the bigger they are, they more satisfying it becomes when the little guys prevail.

Storm King’s Thunder is a giant adventure that allows players to bowl over enemies. Plus, it’s a wonderful story that interacts with the larger story of the Forgotten Realms. It’s also a reminder that if you aren’t playing D&D, then you just aren’t doing life right.

You can purchase Storm King’s Thunder here. You should do so.

[Disclosure: Wizards of the Coast provided Nerds on Earth a complimentary copy of Storm King’s Thunder for review.]