Long ago, there was a kingdom where humans and giants lived together in harmony. The humans weren’t strong, but they could dream of towers that pierced the sky and bridges that spanned the sea. The giants were not imaginative, but they had strength. The giants and humans joined together to forge a grand kingdom. They believed that nothing was impossible if they worked together.

Then a terrible calamity destroyed the kingdom. Giants blamed humans for not imagining that such a thing would happen. Humans blamed giants for not being strong enough to prevent it. The humans fled down into the valleys, the giants up into the mountains. And so it is today – Giants hide among the peaks and humans live below. Giants and humans have each built their own kingdoms since, but none are as magnificent as when they worked together.

The above folktale comes curtesy of the Pathfinder RPG and boy, oh boy, does it conjure up better imagery than something like Hickory Dickery Dock. But giant lore has always been built up with cool stories and legends that surrounded them, going back as far as “in the beginning”:

The Nephilim were on the earth in those days—and also afterward—when the sons of God went in to the daughters of humans, who bore children to them. These were the heroes that were of old, warriors of renown.
Genesis 6:4

‘Nephilim‘ has primarily been translated into its literal form: Giant (although a more scholarly translation would be “those that cause others to fall down”; a mighty, successful warrior, in other words).

The point stands: Giants throughout history have gotten all the cool stories.

That said, the question has been begged: Why has humanity remained obsessed with giants, and continued to always churned out fresh stories about them, yet have never lost sight that it’s the little hero that ultimately has the power to bring a giant down?

Mainly, giants have been depicted in popular nerd lore like D&D as adapting remarkably well to their surroundings, up to the point of taking on the very qualities of the terrain or culture they live in. This has allowed many types of giants to spawn, namely hill giants, jungle giants, stone giants, marsh giants, fire giants, Andre giants, and more.

This adaptability has allowed giants to become the villain in a variety of different settings and cultures. No matter if your hero is fighting an Ogre or a Philistine, there can be an idealized giant to serve as the foil. And the bigger that giant is, the harder it falls, making sure that your comparatively diminutive hero looks especially heroic when she brings it down.

Yet that vast array of ways in which giants are represented, and the huge number of tomes in which their stories appear, makes it difficult write comprehensively about them in one 800 word article. One must focus. So my apologies to the other types of giants, but I’m going to focus on the giant that always stays frosty. 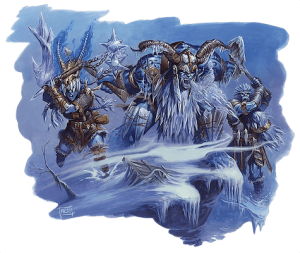 Frost Giants have a lot of roots in Norse mythology. There they are called Jötunn and have been banished to one of the nine worlds, having been denied entry into Asgard because, oh, I don’t know, Thor or Odin had a bad day or something.

But Norse frost giants were are named heavily using the í, ö, ð, á, æ, and Æs common for the language, and those are kind of a pain to create repeatedly as I’m typing, so I’ll close this article with a focus on the frost giants from D&D. 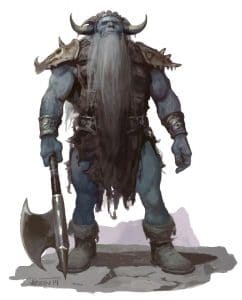 So a D&D frost giant is just a big Viking, right? No, not exactly. D&D “monstered” them up. For example, a D&D frost giant are almost always evil creatures, standing 15′ tall and weighing over a ton. They are depicted with bluish white skin (another example of giants morphing to fit the climate they live in) with either white or dirty yellow hair.

In combat, frost giants will hurl rocks, as giants are wont to do. Later, they’ll close in with battleaxes, using leather or fur hide to armor themselves. Given the climate they inhabit, they are immune to cold, but particularly vulnerable to fire.

But they aren’t fully monsterized. Frost giants will take prisoners if possible.

Around since the first edition of D&D, giants have been depicted in classic D&D adventures, such as Steading of the Hill Giant Chief, Hall of the Fire Giant King, and Glacial Rift of the Frost Giant Jarl, my personal favorite (Check out the module on D&D Classics.)

We’ll have to leave it there, knowing that we’ve left out a giant amount of giant lore, lest this become a giant article. But I hope this little teaser gave you a giant-sized curiosity toward giants. They truly are one of the biggest monsters of general fiction and of fandom.

Recap and Review of Agents of SHIELD Episode 308: Many Heads, One Tail