By Clave Jones On May 27, 2016 Last updated Apr 21, 2017
Share TwitterReddItPinterestFacebookEmailPrint

Giants go back to times long ago.

I hope you picked up on what just happened, because that lede set you up for us to talk about Against the Giants, one the greatest D&D adventures ever.

In 1981 Gary Gygax, the All Father of gaming, released an adventure called Against the Giants. The adventure was actually a repackaging of three smaller adventures that featured giants: 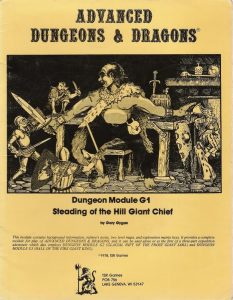 Steading of the Hill Giant Chief (G1) This adventure begins with the words, “Giants have been raiding the lands of men…” So the PCs are hired to “punish the miscreant giants”, and they best prevail or it will be their heads placed on the chopping block.PCs are equipped with weapons and horses, along with a guide and a map that shows the location of the hill giants, who are led by Nosnra, a tricksy hill giant chieftain who loves him some ambushes.
There are two primary locations: the upper level of the hill giants’ lair and the dungeon level beneath it. The chief’s treasure room contains a map of the Glacial Rift of the Frost Giant Jarl, and a magical item that transports the party there. This leads us to… 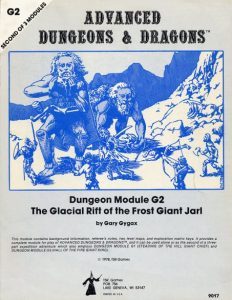 Glacial Rift of the Frost Giant Jarl (G2) Just like before, the bulk of this adventure takes place in two locations: an upper rift area and a lower area of natural caverns.The adventure contains yeti, ogres, winter wolves, polar bears, and giants who always keep it frosty.

There is also a prison that contains a lovely storm giantess. If PCs defeat the jarl, they can pull a lever that will transport them to the Hall of the Fire Giant King.

That’s what comes next. 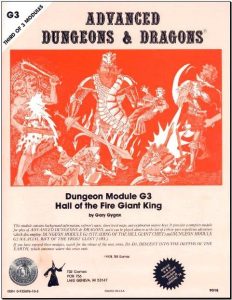 Hall of the Fire Giant King (G3) It is here that the players discover the force behind the giants’ alliance. This module is twice as long as the previous two (16 pages instead of 8), but 1,000% more awesome.The giants in this adventure live in a hot, smoky barren area made of rock, guided by the leader of the fire giants, King Snurre Iron Belly. The adventure includes gnolls, hell hounds, and a red dragon. But of particular interest is a room that contains Eclavdra, a drow.

Although each of the modules above were released individually, they were collected together to form Against the Giants. 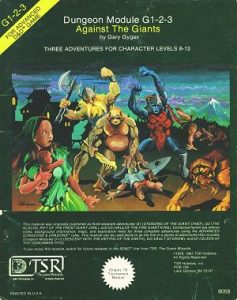 There are few adventures more iconic than Against the Giants. Most copies have been leafed through so many times, they are more Scotch tape than paper at this point.

Each adventure is really just a shell, with not much story or intrigue or drama, which was typical for adventures written during that time. Very few of the NPC’s even have names and their backgrounds certainly aren’t fleshed out. It’s hack and slash, in all the best of ways.

But the generic nature of Against the Giants is it’s strength, as it lets each gamer fill in the details with their imagination, just as things were meant to be.

And many old school D&D players did that. Stephen Colbert reminisced thusly:

“Those old “Giants” modules, those were tremendous. Those are some of my favorite memories: working my way through fire giant, frost giant, and storm giant castles.”

Many credit the current popularity of the drow with how well they were introduced way back in Against the Giants. In fact, when the Against the Giants modules were combined with the drow ones (Queen of the Demonweb Pits) that came after, Dungeon magazine called it the #1 module of all time.

Over the years there have been Anniversary Editions released, and word is that Against the Giants will soon get a modern update for D&D 5e.

But why wait? Play a classic. Older modules convert really well for D&D 5e. Besides, it’s nice to play something so iconic.

Noble Knight is a game store that specializes in old D&D adventures like this. Hit them up for a copy of this classic. (Noble Knight even has the individual adventures: Steading of the Hill Giant Chief | Glacial Rift of the Frost Giant Jarl | Hall of the Fire Giant King.