By Michael Adkins On May 27, 2016 Last updated May 26, 2016
Share TwitterReddItPinterestFacebookEmailPrint

1. X-Men: The Animated Series got an honest trailer!

If you were a nerd in the 90s, you know this show and you can definitely hum its theme song.  The folks at Screen Junkies pull no punches as they lovingly poke fun of Sentinels that are terrible at their jobs, Storm always screaming at the elements, Wolverine’s grunting, and Scott and Jean’s affinity for one another’s name.  My favorite line: “Because nothing can beat stereotypes like a different, more powerful stereotype.”  It made me laugh out loud.

Chris Sims has been rewatching and reviewing this series in depth and at length over at Comics Alliance if you just can’t get enough!

I’m taking credit for this one, guys.  This proves that if you complain loud enough on the internet someone important and with power will hear and make all your dreams come true.

Or maybe its more likely that they’ve been working on this for far longer than I’ve been complaining about it.

Regardless:  For $6/month, there is plenty to read, discover, and love.  If you’re a fan of the comic medium but feel stuck in Marvel or DC – or you think they’re the only names in the game – drop the $6, even if only for a single month, and dive into Buffy, Chew, Lazarus, Locke and Key, or The Walking Dead.  You’ll thank us later.

Oh, and our own Ross Hardy also whipped up a quick primer on what’s available should you need a bit more direction.

3.  Captain America hailed Hydra, and the problem with that is bigger than comics. 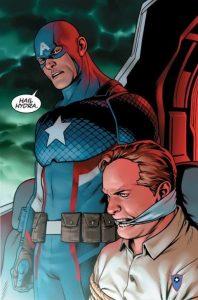 If its news to you that Captain America has announced himself as a member of Hydra, where have you been these last few days?!  People are livid with the direction indicated in Steve Rogers #1 and for reasons extending well beyond Rogers’ longstanding character.

The link above is to an impassioned article in which Jessica Plummer of Panels.net explains the real world offense and sting this move makes on millions.  Definitely a worthy read, and potentially eye-opening for those unfamiliar with Captain’s origins and creators.

Geoff Johns’ DC Universe: Rebirth launched this week and there’s a lot to be happy about.  As we noted in last week’s Friday 5, Johns is stepping into the point position for the DC cinematic universe 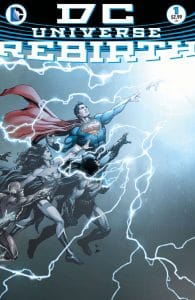 and when you couple that with the tone and direction of Rebirth…well, you get something noteworthy.

Without spoiling any of the content, two of our writers had this to say about the first issue:

Jason Rebirth is very, very good. One scene especially had me a little weepy. But, as we all know, I’m a crier…

Ross I feel like I’m 16 years old again, seeing Nick Fury walk out and talk to Iron Man for the first time after the credits.

Sounds like Rebirth will prove to be solid and give us a foretaste of what we can expected from future DC cinematic releases.  I’m assuming we won’t see Johns’ direct influence until after Wonder Woman (June 2017) since it is already in post production, so the earliest we can possibly hope for his significant influence will be Justice League (November 2017) or maybe even The Flash (March 2018).

5.  This video essay on “weaponized intertextuality” will give you something to think about.

Intertextuality is when you see something borrowed in a movie (in this case) and it gives you the feels.  Some of the more recent (and successful) instances of such would be the reveal of the Millennium Falcon or R2D2 in The Force Awakens, but not all intertextuality is the same.  Sometimes they feel forced, fall flat, or are entirely superfluous to the narrative in which they appear.

The video does a solid job of explaining what intertextuality is as well as pointing out a few glaring examples of when it has been “weaponized,” and SlashFilm chief Peter Sciretta weighs in on the contents in his follow up paragraphs below.