By Joseph Robinson On May 28, 2016 Last updated Dec 15, 2020
Share TwitterReddItPinterestFacebookEmailPrint

Most nerds worth their salt have waded chin-deep into the world of J.R.R. Tolkien’s The Hobbit and Lord of the Rings. Yet it seems that far fewer have taken the deep plunge into Tolkien’s masterwork (and life’s work) The Silmarillion.

Here at Nerds on Earth, we don’t blame these people. The Silmarillion is a dense, jumbled web of interconnected stories that are staggering in their scale. Let us help you make some sense of Tolkien’s overarching mythology of Middle Earth! And let’s start with the ruling spirits of Middle Earth, the Valar (There’s a TL;DR version at the bottom if you’re not in the reading mood).

The Valar
In Tolkien’s mythology (and, to be clear, his stated goal with the Silmarillion was to create a modern mythology for England), the ultimate God of the universe is Eru, or Illuvatar in Elvish.

In the beginning, Illuvatar created the Ainur “in his thought,” and they made a great music in the heavens. Illuvatar took the music that the Ainur made and made it visible. Then some of the Ainur fell in love with the vision of the world, and undertook the task of actually creating the vision they had seen in the heavens.

The greatest among them were called the Valar. The Valar are basically Tolkien’s equivalent of ancient Greek, Roman, Norse, Germanic, etc., pagan gods – meaning that they each have a realm of responsibility within creation, and one of them is the apparent leader or ultimate authority (think Zeus, Odin, etc.).
Manwe
Among the Valar, the Zeus figure is Manwe. His realm is the air, the winds and clouds, from the very heights of creation all the way down to the breeze that blows in the grass. He loves strong, swift birds (like, oh, I don’t know… Eagles), and they do his bidding. He rules the other Valar, and all of Ea (creation) by extension with wisdom and goodwill. He is closest to the mind of Illuvatar himself, and is his direct representative in the physical realm.

[Aha! Moment] – In Tolkien’s Middle Earth, the primary God-figure in the eyes of Elves and Men is Manwe, whose essential symbol is the great eagles of the north. So in The Hobbit and Lord of the Rings, when things are at their worst and suddenly “the eagles are coming!”, it is either literally, or highly symbolic of, a divine intervention by God himself on behalf of the side of good.

Melkor
Even though Manwe ended up as the ruler of the Valar and all of creation, he was not actually the greatest and most powerful. The greatest of the Valar was Melkor, “He who arises in might.”

Melkor had some of the power and knowledge of each of the other Valar, but he turned that knowledge and power to evil purposes. He sought to control and possess Light for himself, but when he couldn’t he descended into mastery of Darkness, which he filled with fear for all living things.

His power was so great that for a very long time before the coming of Elves or Men into the world, he waged war against the others of the Valar and held his own.

[Aha! Moment] – Sauron, the embodiment-of-all-that-is-evil-dark-overlord from Lord of the Rings… was only one of Melkor’s lieutenants. Sauron isn’t actually even on the same level of creation as Melkor. Melkor was one of the Valar, and Sauron was one of the Maiar, a class of spirits that served the Valar. So the difference between Sauron and Melkor is like the difference between Jean Grey and Dark Phoenix. You know, if Jean Grey was evil… 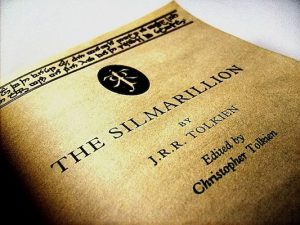 The other Valar (or Valier for the females of the group) are:

[Aha! Moment] – Like I said, Tolkien’s mythology looks a lot like many other ancient mythologies in the sense that there are greater and lesser spirits, and the greater ones have mastery over creation itself in some measure or another. The important thing to remember is that all of these spirits are entirely absent from the stories most of us are familiar with – The Hobbit and Lord of the Rings. Nearly everything that happens with these spirits in The Silmarillion happens long before the coming of Elves, Dwarves, or Men.

TL;DR Version
Illuvatar created the Ainur and the Maiar. The greatest of the Ainur were the Valar, and the Maiar served them. One of the Valar, Melkor, turned evil and rebelled, becoming the first and greatest Dark Lord. The other Valar, led by Manwe, fought him for ages uncounted. Ultimately they succeeded in driving Melkor into the Outer Darkness, and the world was saved until Sauron arose to threaten it again. When the Eagles show up and save the day in The Hobbit and LOTR, it represents God himself intervening on the side of good.