Recap and Review of Agents of SHIELD Episode 308: Many Heads, One Tail

After last week’s capture of Lash, what happens now? What is in store as they try and merge the SHIELD, ATCU and Hydra storyline?. This week is Agents of SHIELD Episode 308: Many Heads, One Tail.

[divider] Recap of Agents of SHIELD Episode 308: Many Heads, One Tail [/divider] 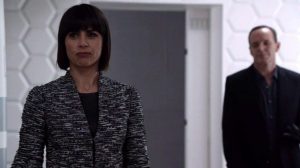 Agents of SHIELD episode 308 opens with Coulson, after his objectivity being questioned by Mack in regards to ATCU, round up the whole team and start giving out assignments, as they are going to go hard after the ATCU and learn everything they can.

Daisy and Mack are given air traffic control kind of responsibilities, working on overseeing the whole operation.  Bobbi and Hunter are going inside, posing as IT folks. May picks Lincoln to go with her to storm the base. And Coulson is going to put on some Sade, and work his magic with Rosalind, because he is a smooth operator.

As we see that story happen, we also see two other plots: Ward meets Gideon Malick, the older Hydra head we have seen for a bit and Fitz and Simmons do research, which turns out sexier than we thought it would be.

The whole ruse into the ATCU is built on a plan. The SHIELD containment unit holding Lash also has some networking stuff and it has created the break in IT that they will use to get inside. Bobbi and Hunter go in and we get some comedic moments with Hunter, the supposed hacker consultant of the FBI one finger hunting and pecking as he types. 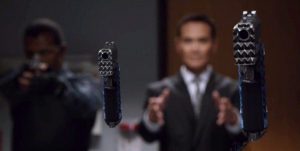 Of course, Daisy is guiding him through. Morse fakes a phone call and goes down inside and discovers that at the base, they are exposing people to the “fish oil” terrigen mists to see who is and who isn’t an Inhuman. (But there is no sign of Lash.) Eventually, someone is on to them and they get into a fight with a magnetism manipulating Inhuman that they take out when Hunter sneaks behind him.

While this has been going on, Coulson has been given Rosalind a tour of his base. (No, seriously, it was the base. This isn’t a metaphor.) Coulson eventually sticks her in a containment unit and pushes her to come clean. He thinks she knows she is working for bad folks because she knew about Tahiti but also claims not to have had any previous intelligence community contacts.

Eventually they figure out that Gideon is a bad man, especially when Coulson explains to her what has been found in the basement by Bobbi – lots of dead, ashy corpses from the people who were exposed and didn’t become Inhuman. 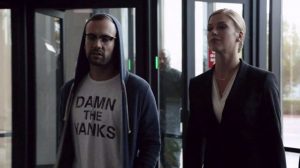 Rosalind then has her right hand man get Morse and Hunter out, to be picked up by Lincoln and May. Most of their interactions had been silence, with Lincoln not being sure what was happening and it eventually coming to a head with May apologizing for what Andrew/Lash had done to his friends and that she didn’t figure it out sooner.

Ward and Malick go through this dance. Malick has all these people come to kill Ward. Ward beats them, tortures them for information, and then arrives at a vault where Malick is. He tells Ward about Hydra’s true nature, which it turns out has existed since long before the Red Skull and World War 2.

Which is also what Fitz and Simmons has discovered. They also had their first kiss but only after Jemma professed her love for The Astronaut Who Will Ruin Everything. But they also discover that Hydra had something to do with the Monolith, which we also see Malick has a piece of. And he is convinced that there is a dark malevolent overlord on the other side who will be coming back soon.

It ends with Ward paying a visit to Lash, trying to force him to turn into his Inhuman form.

[divider] Review of Agents of SHIELD Episode 308: Many Heads, One Tail [/divider] 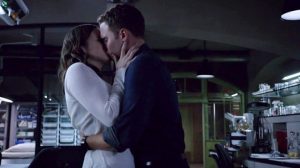 Entertaining *and* Educational: A Book Review of The Jericho River