Recap and Review of Agents of SHIELD Episode 307: Chaos Theory

After last week’s reveal that the Big Bad of the first half of the season has been one of their own, what happens now with SHIELD?

Several things are happening as Agents of SHIELD episode 307 opens:

We then get a divergence of plots that are told over the episode that I am going to group for the sake of recapping.

FitzSimmons. Jemma brings the cell phone that she had on the other planet to Fitz and asks him to try and retrieve data. After science, he is able to do so and then hears and sees all the things we saw Jemma record in the off world episode.

In one of the videos, she basically confesses her love for him and he cries like a grown man should. Later, the two of them are watching out the window as the sun rises and Fitz says he saw it all. When he basically gives her an out to take it all back, she leans in harder and says there is nothing that she would take back. And they decide that they should do something about that but that for now, they are going to just watch the sun rise.

Andrew goes to the Cocoon, which is a SHIELD training in the middle of a large metropolitan area, which feels like the dumbest idea ever. I mean, first, you are paying exorbitant real estate prices. Think how much more space they could get outside of the city!

Second, there are people everywhere. Do you really want your people who can’t control their powers hanging out in densely populated area? Makes no sense. I am starting to think Coulson, or at least the SHIELD person in charge of real estate acquisition, needs to be fired. 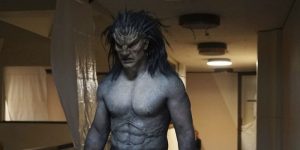 Garner is interviewing Joey and has an episode where he sees himself as Lash killing Joey and we start to get the play of how they are going to do this: Andrew can’t control himself. (I will give my opinion of this later.)  May shows up then, having done some research to verify that Andrew probably is Lash. He confesses and then shoots her with a stun gun.

She wakes up captive in an abandoned building on campus. (NOTE: I’ve never seen an abandoned building on a working campus. They really need a real estate consultant. Or I’ve been watching too much HGTV.) And Andrew explains how when he was transformed, after being exposed to the mists from one of Daisy’s mom’s books he was doing research in, he is overwhelmed with the need to attack Inhumans.

In other places, Rosalind and her crew arrive on SHIELD’s super flying base that isn’t a helicarrier and Coulson decides to get Daisy to give her the tour. You get the standard two sides, diametrically opposed discussion.

Daisy is horrified by the stasis idea and Rosalind is horrified by the idea of evil people with powers running free. As Rosalind puts it, for every Daisy, there is a Lash. Rosalind then debriefs with Coulson and helps him tie his tie, because if the writers of the show want us to know anything this season, it is that these two dig each other.

Morse and Hunter have a conversation that seemed to be predicated on being a reason for them to show Bobbi with her shirt off. (Seriously, so dumb and annoying.) The basic gist: Morse doesn’t want them to become so consumed with getting Ward that they lose themselves.

Meanwhile, Lincoln has reached out to Mack and Mack goes to pick him up. Lincoln has figured out that Lash is killing all these Inhumans because he must have the super secret book, which SHIELD had. They figure out it is Andrew. They get back to the SHIELD HQ and all the pieces come together and they all go find Lash.

When they arrive, there is an epic hunt and battle. At first, Lincoln goes off the plan and lashes out at Lash. (See what I did there?) This chaos then makes everything go berserk. Mack gets taken down by Lash, a team of ATCU gets smacked down by him and when Rosalind empties a clip into Lash, he choke slams her off a tall balcony. 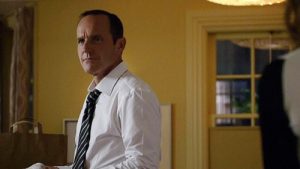 But Daisy saves the day and lowers Rosalind to the ground with her powers. Lincoln finds Lash again and baits him into the spot where they need him. May talks Andrew into his normal form, which Lincoln explained was going to be a temporary thing; eventually the Lash form will be permanent. And once he shifts backs to the normal form, May empties a gun into him, knocking him into the SHIELD containment unit they brought for him.

When Coulson asked how May knew that the shots wouldn’t kill him, she says “I didn’t.” And we then get a flashback to their vacation where May tells Andrew she doesn’t think she deserves good things.

So what do Coulson and Rosalind do? Hook up. I mean, I know when an Inhuman saves my life, I want to bump uglies with a one handed person. And clearly, it isn’t just me. But in the midst of our discovering that, Rosalind gets a phone call from the old Hydra guy, who had been meeting with Ward, whose plan is now to cut the head off of SHIELD: Phil Coulson. And it seems like Rosalind will be a part of that plan.

So, this week is a 6.5 out of 10.  There are parts of it that were well done, especially the chase and fight scene at the end. But I also feel like they were doing a ton to wrap up too many plot points all at once. Mid-season finales may be a terrible idea if it means we can’t carry any plot points past them.

The best part of the episode other than #FitzSimmons was seeing Daisy move towards Rosalind’s ideas and vice versa. Of course, the ending seemed to undo all of that.

Look at all that they resolved all at once: