I’ve been running Curse of Strahd for three groups spread out over the great state of Georgia. All three narratives have developed wildly different from one another, a beauty inherent to RPGs. But all of them started in Appendix B: The Death House.

The Death House takes your party from Level 1 to Level 3, but more importantly…it sets the tone for the dark, foreboding, dangerous, and haunting land and occupants of Barovia.

The PCs come to empathize with Dorothy Gale quickly as they realize they aren’t in Kansas anymore.

This was particularly true for the third group I whisked off through the mists to Strahd’s domain as more than half the group had never played Dungeons and Dragons before. They didn’t really know what to expect, so when the gates of Barovia opened on their own they grew wary. The murder of crows that escorted them to Barovia proper didn’t lighten the mood either.

And then they met Rose and Thorn. 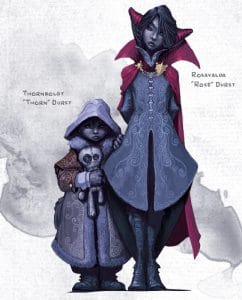 Rose and Thorn are two young children the party encounters in the city of Barovia as they cry out for someone to rescue their infant brother Walter from his third floor nursery. When asked about what’s going on, they explain that there’s a monster in their house that their parents keep trapped in the basement.

Think about this ask: Go fetch a baby from a non-burning building. Firefighters are charged with doing more than that on the daily! They didn’t say, “Hey, do you guys mind killing the monster in the basement?” This is why so many RPGs start off with rats in the cellar. Rats? My fantasy self can handle rats, for sure!

That second request (monster in the basement) is qualitatively different! And that’s what makes the Walter fetch quest the perfect bait for a bunch of newbie PCs. That’s just good writing, Wizards of the Coast!

The Chill Touch of Death: Killing a Level 1 PC

This particular group made a beeline for the third floor. They wasted no time at all! At the landing of that floor, they made quick work of a suit of animated armor and then started nosing through the rooms before finding the nursery.

The Lawful Good Ranger played by my friend Whit walked right up to the crib, parted the shroud, and lifted the black swaddling cloth bundle.

When he did, I asked him to roll a Perception check. DC 10. I was winging this–giving him a chance to feel a sharp drop in the temperature of the room and feel the hair on the back of his neck stand up to alert him to the presence of the spectral nursemaid. He failed the easy check. 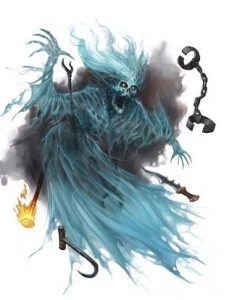 I rolled to hit. I didn’t even do so at the advantage she could have had given her surprise.

I asked him for a Constitution saving throw. DC 10.

So according to the specter’s stat block, the necrotic damage then lowers his max HP by the damage dealt. If it drops him to zero, he’s dead.

Behind the DM Screen: Killing a Level 1 PC

I killed him, and I killed him dead. I even remember telling Whit, “You’re character doesn’t even know he’s dead.”

And this sent shockwaves through the other PCs (and Whit, himself!). That was fast! We’ve been playing for ten minutes and one of us is already dead! What is this place?! What the hell are we up against?! What have we gotten ourselves into?!

And as they worried aloud about the encounter at hand as well as what it might mean about what might be waiting for them in the basement (If this isn’t the monster…how bad must this monster in the basement be?!), two words came to my mind (as a wicked smile crept across my face):

Anywhere Else But Barovia: Killing a Level 1 PC

If there was hope to be had, light to be shed in this place…it was going to have to come from the outside–from the PCs themselves. 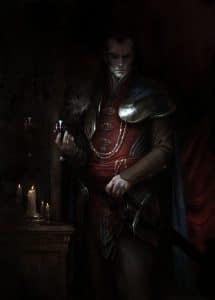 Hope is no denizen of Barovia. It is an import.

I killed Whit’s character to send this message to the party. They weren’t in Hobbiton. They were in hell.

And they hadn’t even met the devil himself yet!

The tactic totally worked. In every session we’ve had since then, Barovia hasn’t just been the locale of their adventure, it has been a character in its own right. There is darkness, depression, anxiety, fear, confusion, and despair.

With one of the other groups (one that is far more tactically sound in combat than Whit’s, but that’s another story), I introduced them to Strahd right away to accomplish the same goal: You’re in my house now. I see all. I know all. And you…you are nothing.

They took a brutal beatdown from Strahd and I ended the session immediately after to leave them in that place of defeat and despair.

And I’d do it again.

Tone matters in your campaigns, and Curse of Strahd is unique in its depravity and hopelessness.  Play that up! It doesn’t have to be all death and despair (we laugh a lot, too!), but never let them forget that in Barovia the sun doesn’t shine; Strahd has eyes, ears, and allies everywhere; the citizens have all but given up; and that your party of adventurers is this place’s only hope.

May they take that challenge right to Castle Ravenloft’s front door and knock the canines right out of the Devil Strahd’s head.

The Drift Episode 10: Starfinder has launched!