Do you like your glass half empty or half full?

I trend toward half full, so Starfinder and Pathfinder don’t feel that different to me. Sure, one has science fiction trappings (Starfinder, obvi) and the other RPG is wrapped in fantasy (Pathfinder), but each have characters that level up and use Strength and Dexterity and brandish weapons as they go on adventures.

You also resolve actions by using a d20 plus a modifier in each game. Comparing how much Starfinder is like Pathfinder is like understanding that humans and apes have 95% of our DNA in common. It’s also true that 95% of Starfinder players affirm that bananas are tasty if not over-ripe. Or something. IDK, metaphors are hard.

But this is not to say that there aren’t some key differences between Starfinder and Pathfinder. Here they are:

7 Important Differences Between Pathfinder and Starfinder 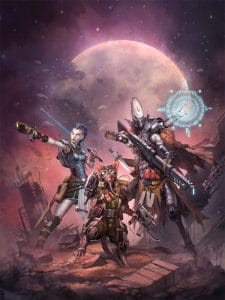 7. Equipment Leveling. Guns, armor, and other equipment have levels in Starfinder, which is pretty thematically accurate if you think about it. Rather than say a laser pistol is available only to first level characters while a laser rifle might be available to 3rd level characters, they simply said that you can have varying levels of everything.

A first level character can use a 7th level laser gun, but this doesn’t unbalance the game due to the fact that the economy (credits) effectively makes those high level items unaffordable to lower level players. It’s a simple, effective, and thematic way to both manage the power curve, while also giving players access to all the gear that the Starfinder universe offers.

6. Bulk. Changes were made in how the weight of objects were accounted for, because good gracious, this needed to happen, as tallying up pounds and ounces is the kind of fun that isn’t fun at all.

Starfinder throws out the kind of weight tracking that should be reserved for My Fitness Pal and instead simply uses a system called Bulk. Characters can carry a bulk load that is half their strength score.

It’s a simple system. For example, a combat knife is a light object and it takes 10 light objects to make up 1 bulk. So it takes 10 combat knives to be “bulky.” The designers of Starfinder leaned into the fact that we would be playing make believe with aliens in an imaginary star system, so they were comfortable divorcing certain aspects from absolute realism in order to dial up the fun.

5. AC. Armor class in RPGs has been mechanically outlined in a variety of ways, from old school THAC0 to the many different numbers in Pathfinder, like flat-footed and touch AC.

Starfinder doesn’t have the one simple AC number of D&D 5e, but it’s pretty darned simple itself. It uses two different figures: KAC and EAC. But it works well.

4. Point Buy. There are some fun and interesting differences in Starfinder when it comes to character creation. For one, Strength, Dexterity, Constitution, Intelligence, Wisdom, and Charisma all start at 10. Then you add or subtract based upon your race. Then you add for your theme.

What comes next is a point buy. Starfinder then gives players 10 points to place in whichever attribute they wish. It makes it pretty easy to make a character. 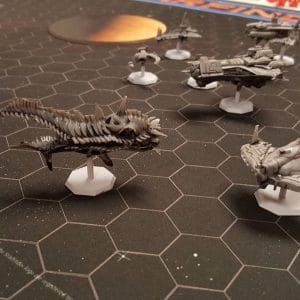 3. Two Attacks for anyone at any time. Certain classes were able to make two attacks in Pathfinder as they leveled up. In Starfinder, any character can make two attacks whenever you want to.

If you want to take a full action not make two attacks in Starfinder, you are free to do so. You simply take a -4 penalty for each attack. Again, it’s simple and thematic, a statement that can be used often in reference to Starfinder.

2. Resolve Points. The changes Starfinder makes to hit points are big ones. First of all, there is something called Stamina, which is something akin to your ability to shake off a punch. The damage you take comes off of Stamina first, then it goes into Hit Points.

Stamina comes back quickly, but Hit Points recover slowly. When your Hit Points are at zero, it’s bad news, because you are dying.

Resolve Points can stave off death. Spending a Resolve point during a 10 minute rest can also recover your Stamina. Further, you can spend a Resolve to complete certain class actions. Needless to say, Resolve Points are a pool that is to be closely managed.

1. Starship Combat! The big area where Pathfinder has zero in common with Starfinder is starship combat! And being that there is no analog in Pathfinder, the starship combat rules are wholly new.

The Starfinder design team cleverly worked to give each member of the party a role, making sure that whatever job you have in the starship–captain, pilot, gunner, etc.–you’re engaged each round. Then ships duke it out on a hex grid.

Fans of Pathfinder (or really anything that uses a 20-sided die, like D&D) will find Starfinder very familiar. Strip away the science fiction veneer and it’s still a wonderful d20 game system. But there are important mechanical differences as well, particularly when you start to dig into it.

Review of Secrets of Magic for Pathfinder 2nd Edition