By Clave Jones On Sep 3, 2017 Last updated May 23, 2018
Share TwitterReddItPinterestFacebookEmailPrint

Motivated by the freedom of the frontier and the promise of gold, these prospectors had to eke out an existence in the harshest of elements. So Alaska attracted a cantankerous bunch. The most cantankerous of all was Fannie, a woman who Alaska magazine said “was quick on the trigger, could wrestle a bear, outsmart a wolf, and outdrink and outcuss just about any man in the north.”

At only 16, the Czech immigrant left her home in Wahoo, Nebraska and headed west, following the brand new Union Pacific railroad. Once there, she learned English swear words and took jobs cooking in work camps. 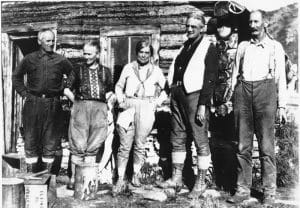 When Fannie ran out of west, she took off north, joining the Alaskan Klondike gold rush, first settling in Dawson City where she worked as a dance hall girl making a dollar a dance from lonesome miners.

But she knew that the way to a man was really through his stomach, so Fannie began following the stampeders to new mining sites, pulling a sled loaded with a tent, Yukon stove, and provisions. She’d arrive at a new camp and set up her tent, posting a sign that announced “Meals for Sale.” Eventually, she operated a roadhouse, a checkpoint where dog sledders would stop overnight for shelter and a hot meal.

But Fannie’s business really took off when she started hunting bears.

One of the best things about D&D and Pathfinder is the call to adventure. A character like a ranger can particularly capture the flavor of a frontier adventurer.

Sadly, longbow-wielding half-elves are entirely fictional, but that doesn’t mean that much of the flavor of outdoor wilderness adventuring in roleplaying games isn’t inspired by real life men and women who seemed to always roll a natural 20 on their survival checks. Indeed, the next time your D&D gaming group sets up camp, spare a thought for Fannie Quigley.

It was said that even though Fannie weighed only 100 pounds, she was “tough as grizzly bear claws.” Speaking of grizzlies, Fannie would hunt the bears simply to collect the lard in order to create the legendary rhubarb pies she served to her Klondike backcountry prospectors. 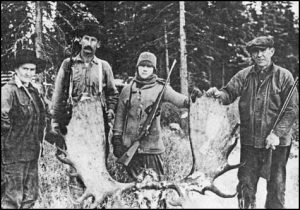 Indeed Fannie was a legendary hunter and cook, being the closest thing to a bona fide folk hero that Alaska had in the first half of the twentieth century. More adept than any man in the rough-and-tumble early days of Alaska, Fannie routinely took down caribou bulls.

One story recounts that Fannie’s second husband, Joe, went hunting one winter but came back empty handed. When he returned, he found Fannie gutting her game: two caribou, a bear, and a moose.

“You ain’ fit to go huntin,” she said as she tossed him her skirt. “Here, you do the housework today. Gimme your pants.”

Another tale shared by Last Frontier Magazine claimed that Fannie had her very own tauntaun moment. Once, far away from her cabin and away from any cover, Fannie fretted on how she’s keep herself warm during the night. While it was too late to haul back the moose carcass, if she left it on the ground, wolves would likely devour it overnight.

So she shot the moose, quickly gutted the animal, then spent the night inside the warm carcass. The story goes that it got so cold during the night that the moose froze solid, trapping Fannie inside. According to Fannie, she “had a heckuva time” hacking her way out, a tale that is vintage Fannie.

Real life locales, history, and animals can serve as the perfect inspiration for our D&D or Pathfinder games. Whether it be exotic or evocative foreign cultures from history or simply a old Alaskan mining town, real life locales can serve as a perfect backdrop to create wonderful adventure settings and hooks.

Likewise, interesting animals like the Alaskan grizzly can serve as a template for an even higher CR monster in your campaign, provided you first mash it up with an owl.

When I think about Fannie, I think also about the character of Jendara in the Pathfinder Tales novel Skinwalkers. Jendara was modeled after Vikings who traveled a cold northern landscape to find their fortune. Many years later, Jendara returned home in search of a simpler life, when a strange clan of shapeshifting raiders pillages her home, forcing Jendara to take up her axes once again. The author could have easily named that character Quigley.

Because the greatest inspiration for our D&D or Pathfinder characters are the real life people among us who have led amazing, adventurous lives. Sure, they might not have dwarfish dark vision or halfling luck, but they sure do provide inspiration for a compelling backstory.

Fannie was renowned for her cooking. Fannie shot and butchered her own meat, of course, then used the tunnels of the Red Top Mine to keep the carcasses frozen year-round. On top of that, she perfected her recipe for potato beer, and managed the  temperature differentials in the mine shafts as her own calibrated refrigeration system. 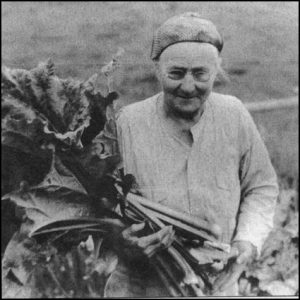 But even in the harsh weather of Denali that had only a ten week growing season, Fannie grew a steady harvest of vegetables, including potatoes, carrots, turnips, onions, radishes, and rhubarb. She’d then add wild berries to her menu, turning them into jams, jellies, and her famous blueberry pies.

All that you have to do to replicate Fannie’s blueberry pie is to pick five gallons of blueberries as they ripen on the edge of your gold mining claim. Then, shoot a good fat bear and haul it two miles back to your cabin. Use your dog team to haul 15 cords of wood for the woodstove, and using a large kettle, render the bear fat into lard.

Then mush your dogs 125 miles to the nearest town for 100 pounds of flour and 50 pounds of sugar. Use the bear fat lard and flour to bake a dozen flaky pie crusts in the oven of the wood cookstove. Keep the stove well stoked to maintain a high temperature. Mix the blueberries with some sugar, then add enough flour to bind up the juices. Put the filling into the crusts and bake.

Don’t let the stove get too hot, or the pies will burn. Cool the pies, then store them frozen in the permafrost mining tunnel behind the cabin.

There was nothing that Fannie couldn’t do and do better than any other person in the Klondike.

Some characters are destined for level 20 and deserve the folk hero background. Creating a D&D character can lead us to fantastical and alien types, but it is often the character that is rooted and identifiable that can be just as compelling.

Further, while we might often gloss past it, it can be quite fun and compelling to imagine what your character does in their down time. Is your ranger a trapper, selling skins in the local village to make a living? Is your wizard also an herbalist, collecting rare plants for his potent potions? Or maybe your character is simply a cook, but goodness does she ever make a killer pie.

Fannie’s husband left her for a nurse in Fairbanks, then moved south to Seattle. But Fannie remained, having introduced the world to what we know today as the Denali National Park. In 1944, at 74 years of age, Quigley died alone in her cabin. It seems that she built a cooking fire and laid down to rest, simply passing away in her sleep.