As I have become more vocal about my growing love for Dungeons and Dragons, I keep running into people that ask questions about how to get started. They are interested in playing but don’t know how and where to find a game. Here are some tips to find a D&D or Pathfinder game that you can join.

First, ask people you know who are into nerdy things. Odds are, if you are a nerd, you know someone who is already playing in a game. Now, that can be intimidating if they are running in a 10 year running campaign with level 17 characters but they will most likely have a handle on the pulse of other gamers and can introduce you. Or if you can recruit enough players, maybe they would come run a one session starter for your group. But if you aren’t that lucky, there are some other options. 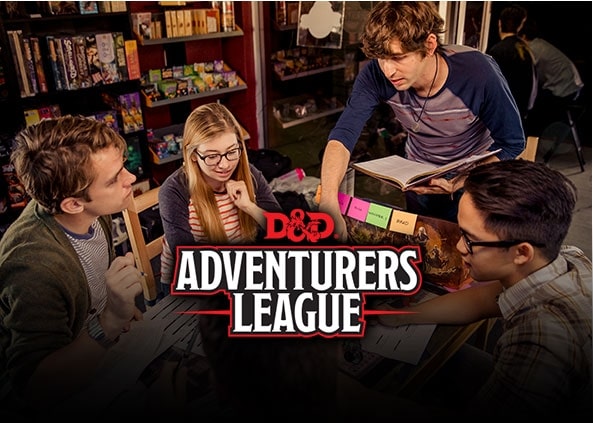 Second, both Wizards of the Coast (Dungeons and Dragons) and Paizo (Pathfinder) have programs that are built to help you find a local game shop that is hosting games.

D&D has the Adventurer’s League program, that has specially designed 2-3 hour adventures that tie to their currently focused product. (For instance, there were many giant focused adventures during the Storm’s King Thunder product.) The league is also built so that you can take a character and play them at any league game and gain experience points, gold and become more powerful, gaining levels and stories. 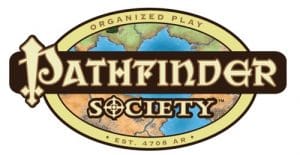 Paizo likewise has the Pathfinder Society, which is a listing of games across the states. Pathfinder doesn’t have quite the sprawling network at Adventurer’s League has but there is a network in place and similarly, they produce adventures for DMs to run. In the area where I live, there isn’t much listed in terms of game locations, which is disappointing but in other areas, there appears to be thriving communities and groups.

One of the key distinctions between Adventurer’s League and Pathfinder Society is the ability to take and move characters easily from game to game. Because of how they have set up and established the rules, I can take my character and play in any league game anywhere if it is in my tier. (The tiers are based on the level of your character.) That makes it much easier to plug and play without much discussion or haggling around your character with your DM.

Third, look for games at conventions. If you are already going to a large convention, most likely there is a gaming track for you to plug into and play at. For instance, last year, a bunch of us Nerds were at DragonCon, so we hopped on to the DragonCon website, figured out the system and dropped into a sweet 2-3 hour dungeon crawl. (Shoutout to @ShimmerwindIsle who DM’d us through that adventure!)

Most convention game organizers also are going to have good DMs, with sessions set up and designed for people who have never played before. Also, the website Warhorn.net has a listing of different games all over the country, at conventions and at local game shops.

Fourth, look at social media. Recently, we decided to start a game on Thursday nights at my house and one of the ways we found one of our players was by posting on the website Next Door. Just a simple mention of D&D and after a few emails, we have a dwarven cleric in our party. Also, sites like Meet-Up can be a good source for games; it is stunning how many different things pop up in the Atlanta area, for instance, when you search for games there.

But, all of those options are built around the idea that you will be sitting around to play together at some game shop or at someone’s house. But, if you live in a smaller, rural area or overseas, that can be tough. While I’d encourage you to organize an in-person game, there are also online virtual games as well. The websites Fantasy Grounds and Roll20 are the two most prominent examples and both have the ability to search for games once you have signed up for an account. Both have fees associated but they are potentially worth it from the ability to connect with others and both systems are being supported with maps and content from Paizo and Wizards of the Coast.

So, these are all some great options if you are looking to play Dungeons and Dragons or Pathfinder for the first time. What other options do you know that are out there for someone to find their first D&D experience?

How to Give Your High Level RPG Encounters a Proper…