Adkins With 2016 nearly (and mercifully) behind us, we eagerly look forward to 2017 and all that is promised nerdom with it. Today Jason, Ross, and I decided to take a moment and make a nerdy resolution or two for the New Year. Fellas: What nerdy thing do you now publicly declare to accomplish or undertake in 2017?

Ross Can I cop out and just say “read more comics?”

Adkins Sure! Its certainly a worthy ambition. But are there any specific titles you’re thinking you need to either catch up on or pick up off the shelves?

And why “read more comics?”

Whats in it for you?

Ross Ugh. I should’ve known I’d have to get more specific!

Okay, first off, I want to finish Chris Claremont’s X-Men.

I trailed off right around the part where Forge and the Dire Wraiths showed up. I don’t even remember why now. I was really enjoying it.

Jason A stellar goal with lots and lots more in front of you.

Comics is huge. I don’t know that I can financially keep up with everything that I would like to be reading but I am definitely making an effort to stay current on some titles.

That said, I am going to try and do all the new X-Men and mutant titles that 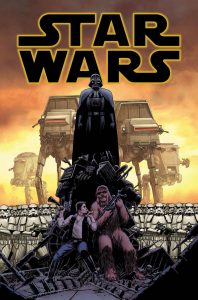 have been announced and soon to be released!

Ross Second, I have been woefully lax about so many of the new Star Wars books.

So I really want to burrow into those.

Adkins Me, too! Clave raves about some of those Star Wars titles, so I’ve got several of them queued up and ready to consume in Marvel Unlimited.

Ross And third, like you said Jason, I want to stay more current. I’ve gotten so spoiled with Marvel Unlimited that I’ve been letting titles slip by, because “Hey, they’ll be on MU eventually.” But I want to plug into the community.

Which is weird, because usually my resolutions are usually about disconnecting and withdrawing from unnecessary stress. But I feel like I want to jump back into it.

Jason There is something that is hard to replicate about reading something the day it comes out.

Adkins Jason, what are you resolving for 2017?

Jason My next resolution is I am going to read more. I looked back over 2016 and realized that I woefully under read. So I purged my podcast lists down to a few and want to try and read an hour a day.

Jason And I decided to go big and start with the Patrick Rothfuss Kingkiller books.

Adkins Finally! We’ve been trying to talk you into those books for years now.

Jason It is one of those series too many people have told me I should be invested in and it is basically impossible to ignore it at this point.

Ross Can I ask why you chose those?

Adkins Maybe Rothfuss will read this, get inspired by your selection, and wrap book number 3 in your honor. 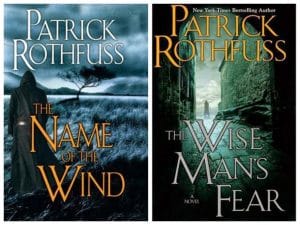 Jason Sure. Part of it was stumbling into Rothfuss via some social media things and liking him in general. Especially Acquistions Inc. Part of it is the recommendations of others and, finally, part of it is knowing they are moving towards a movie and television series. I’d rather read the books without that around, which I didn’t do with Game of Thrones and kind of regret.

Jason Plus, they are huge, and I like a good challenge. Between reading time and Audible time working at the desk for the 9-5, it will be a good start to the year.

Adkins My secondary resolution mirrors you own, Jason. In 2016 I took on a challenge to ruck 1000 miles and while I loved (almost) every mile of it, it was a major time suck. I didn’t read nearly as much as I usually do, so there’s that to recover.

Ross Your fitness goals have no place here!

The most exercise I resolve to get in 2017 is rolling dice.

Jason Working some more on the NPR sci-fi and fantasy list?

But my primary resolution is to plug into Pathfinder. Hopefully there’s a Pathfinder Society group nearby that’s willing to accommodate a newbie!

Jason So what is the motivation around that one?

Adkins I have just fallen more and more in love with the system and adventure paths as I’ve read them and listened to the Glass Cannon Podcast. I love me some DnD 5e; don’t get me wrong! But Pathfinder feels like my next step as a player and maybe even as a DM. 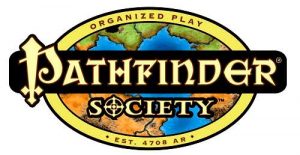 Just the options when it comes to character creation are mind boggling and I can’t wait to wade into those waters and crank out some tremendously fun race/class combos.

Jason As I have been reading through the Core Rulebook I definitely can understand how and why people are drawn to it. And the rate that Paizo cranks out more new and great material to support it is outstanding.

Adkins Me neither, friend. But I’m looking to change that in 2017.

My only real concern is that I’ll start confusing the systems when I DM. I already do that a little bit just from constantly listening to the GCP.

But I think there are worse problems out there than getting a little Pathfinder in my DnD.

Jason So we have talked about things we want to pick up. Are there things that we want to let go of? I already mentioned I did a podcast purge a week or so ago and feel pretty great about focusing up in that area.

Adkins Hmmm…That’s tougher for me. I may end up culling some video game time? Most of our (mine, Jason’s, and Will’s) Thursday nights in 2016 were spent playing video games together over XBOX Live, but we’ve earmarked those same nights in 2017 for some DnD goodness over roll20.

Jason I also have decided that quitting something is okay. When I quit The Walking Dead after the season debut, it was surprising to me how little I really missed it. Not to rehash that debate at all. I learned out of that to walk away if I am not enjoying something.

Ross Absolutely. Stop trying to get that psychic investment back.

Jason For instance, 2 episodes into the new Netflix Canadian import Travelers, I went “not for me” and went and read. And I feel great about that decision.

And the same way about podcasts, I can always revisit one if I hear a particularly great episode has happened.

Adkins How’s about we close with one thing we are really looking forward to nerd-offering wise in 2017. Something we just can’t or won’t miss? 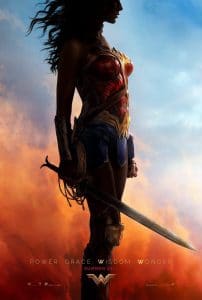 Ross Mine is easy: movies. 2017 is looking pretty great.

Jason Man, there are so many things but here are two. One everyone can enjoy and one with a much more limited scope.

I booked off the day in March Iron Fist hits Netflix and will spend all day in that glory.

Adkins Same for me re: Gamehole Con. It has been on my calendar since September of this year and it honestly can’t get here soon enough. It is taking the place of Dragon*Con as my nerdy convention of the year, so I’m hoping it is worth every mile and penny.

By the looks of our various resolutions and eagerly anticipated offerings of 2017, we will have no shortage of fodder for posts from the three of us next year.

But then again…when have we ever?

Friday 5: The Biggest Nerd Culture News of the Week

How hitting all the right beats in D&D can suck you into the story.