Adkins Today, we’re kicking fantasy the the curb. Its not that we don’t love fantasy anymore. Our relationship isn’t even at “Its Complicated.”

We heart fantasy. But science fiction and fantasy are often lumped into a single category, and sometimes fantasy feels to always be at the fore; eclipsing sci-fi. This week, its science fiction’s time to shine. Specifically books (as you might have guessed given its me, Ross, and Joseph in the chat and books seem to be what we talk about most!).

Who’s got a home run sci-fi title to start this chat off at warp speed?

Ross I’ll kick us off.

My contribution is actually an entire library–the works of William Gibson. But I’ll try to stick with Neuromancer, his 1984 debut novel.

This thing was basically my Catcher in the Rye, if Catcher In the Rye had space Rastafarians and women with knives for fingers.

Adkins Those two things would have significantly improved Catcher in the Rye.

Joseph Yeah, this may be anathema, but I didn’t really like Catcher…

Ross Y’know, for the longest time, I didn’t either. But I digress.

There is nothing as influential on my writing style as Gibson’s work generally, and Neuromancer specifically. The way classic detective noir fiction was merged with neon-soaked high-concept science fiction opened my mind to a completely new way of looking at the future. 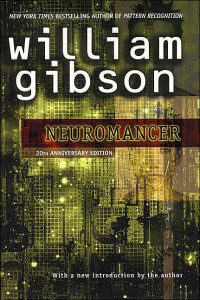 Ross Neuromancer was nothing like the sci-fi I had been devouring up until that point; either the classic hard stuff of Aasimov and Heinlein or the full-throated, thin-on-plot space marine video games. Neuromancer was so much more real, covered in grit and grime and sweat and a lot of blood.

And it was just (and I know this will be subjective) so much COOLER than everything else I had ever read up to that point. Molly, the swaggering, sneering street samurai was way more interesting than Master Chief or the square-jawed spacemen I had discovered in 50s science fiction anthologies. The semi-malevolent pair of artificial intelligences, Wintermute and Neuromancer, were villains with depth and nuance. And I have to go back to the space Rastas, because seriously, I still haven’t seen anything like that again.

Joseph Ross, this may also be anathema, but I actually haven’t read Neuromancer. I’ve seen it on every “must-read sci-fi” list I’ve ever seen, but never gotten around to it. Can you give me the elevator pitch?

Adkins SPACE RASTAS, man. How have you missed that?!

Adkins None of those things count as additional anathemas for you, Joseph?

Joseph No, I’ve seen them.

Adkins I’m just giving you a hard time for using a cool word I don’t think I’ve ever used. Twice. In the same chat.

I had to use it just to fit in.

Joseph It’s cool, Adkins. I just googled it and realized I’ve been using it wrong.

Adkins HA! Do I need to make edits?!

Ross Burned out hacker Case joins Molly, a cybernetically enhanced mercenary, Armitage, a military man with a mysterious past, and a holographic performance artist, to break into a space station on behalf of an artificial intelligence.

That’s about the best summary I can think of on short notice. There’s a lot that’s going on, though

Joseph, what are you bringing to the table?

Joseph My first instinct was to choose a book from the same era as Ross. It seems like the early-mid 80s were an absolutely amazing time for sci-fi. I was going to use Ender’s Game. But, the more I heard Ross talk about the way Neuromancer made such an impact on him, the more my mind came back to a much more recent book – Ready Player One. 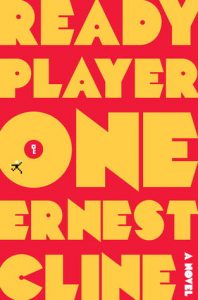 Adkins And excellent. I rallied so hard for a high school book club I was leading to read that one – even though I was 100% sure the students (all born post 1995) were going to miss 85% of the awesome 80s references.

Adkins That’s such an awesome thought!

Ross Huh. Never looked at it that way.

Ready Player One is the first place I ever heard the name Gary Gygax.

The sci- isn’t nearly as -fi as other books we’ll talk about, but it’s sufficiently advanced beyond what we currently possess that I think it qualifies. The story is classic underdog v. the world to a large extent. And it’s got that amazing “for the love of the game” quality about it.

I absolutely love that book.

Adkins Your turn for an elevator pitch!

Joseph In a world, where not… Sorry… wrong voice…

Die-hard gamers take on the challenge of a lifetime – saving the internet from the mega-corporation that seeks to control it for their own profit. In virtual reality!

Adkins That book is just plain fun, too.

Joseph YES!! So much fun!

Adkins “Fun” isn’t necessarily a quality I ascribe to every book that I think is fantastic, but this one is qualitatively fun.

Ross It certainly had some playfulness to it.

Adkins I had a hard time narrowing this down – as I’m sure you both did. Ender’s Game was in the runnings. I’ve already gushed about Starship Troopers, so it was off the table. So I went with the antithetical book to Troopers: Joe Haldeman’s The Forever War. 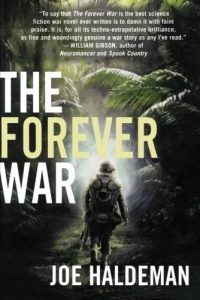 Where Troopers is considered pro-war, The Forever War leans anti-war. I believe Haldeman even wrote it in response to Heinlein’s hit.

Fun fact: Heinlein actually wrote Haldeman congratulating him on winning the Nebula in [find year] and even told him it “may be the best future war story I’ve ever read!”

Ross I would love to have a debate about whether or not Starship Troopers is actually pro-war, but for now, I’m intrigued.

Adkins Maybe it is just pro-war in comparison? Many took it to be very polemical.

LOTS of comparisons on the internet worth reading.

Adkins Anyway: The Forever War is about humans achieving near-lightspeed and engaging in a war with an alien race. Only the soldiers that go on tour for two years come back to find that 50 years have passed on the earth.

The main character serves for four years total (I think) and loses centuries. When he gets back to civilian life, the world is completely different.

Adkins It is so, so good, you guys. Have either of you read it?

I am apparently woefully under-read.

Ross I’ve actually never read this one. I tend to skip military sci-fi. Starship Troopers was the exception.

Adkins See, I heart military sci-fi, so I read it lots.

So the elevator pitch: Interstellar meets Taegukgi (which is probably a movie almost no one has seen, but if you’re reading this: WATCH IT because its amazing).

Ross Can you give us an elevator pitch for Taegukgi?

Adkins Two brothers go to war. One is believed to have died, then is later almost murdered by the other brother (who kinda breaks bad during the course of the film) who then sacrifices his life so the one who was thought to be dead can return home.

I guess that’s more of a summary than an elevator pitch, but you put me on the spot!

So now you’ve got books to read and at least one movie to watch (more if you somehow missed any of the ones Ross used in his elevator pitch).

With Christmas nearing quickly, you’d better get these items on your lists ASAP. You’ll thank us later.

Some Monsters and Scary Ghosts to Spread Some Christmas Cheer