We here at Nerds on Earth feel that it’s high time we reclaimed the phrase “nerd alert.”  For far too long, its been used to ostracize people who spoke of dragons, played turn-based card games, and debated the superior captain of the USS Enterprise.

Instead of pointing the finger at the person, we want to point the finger at certain noteworthy objects of desire for the nerd populace. We want to alert our fellow nerds of what is excellent; especially if it will prove to be wholly new to you. These posts will be our attempts at pointing you towards some of the hidden, new, or downright awesome items in the loot crate that is nerd culture.

First up:  A new sci-fi book that’s hot off the presses and deserving of a read…or three.

Greg Drobny said, “The idea of combat – whether it is between two people, whole armies, or even a man with his own demons – shapes the fabric of humanity to its core.”  Because of the truth I believe is in that quote, I believe there’s a lot of opportunity for beautiful, moving narrative about the tensions, hostilities, competing philosophies, consequences, machinations, scheming, and executions of war. In fact, some of my favorite books have war at the epicenter; books like The Forever War and Starship Troopers, along with fantasy titles like the Song of Ice and Fire series…just to name a few.

I lifted the Drobny quote from the foreword to a new book from Apex Publications called War Stories: New Military Science Fiction, a collection of 23 war-centric short stories from just as many authors.  Its a fantastic anthology that explores the grotesque realities, the necessary sacrifices, the inner turmoil, the often damned-one-way and damned-the-other decision making, and the absolute heartbreak of war on the front lines, in the war rooms, and in the home.  And the book does so “without condemnation or glorification” (a quote from the back cover) – which is important.  No agendas here; just excellent fiction. 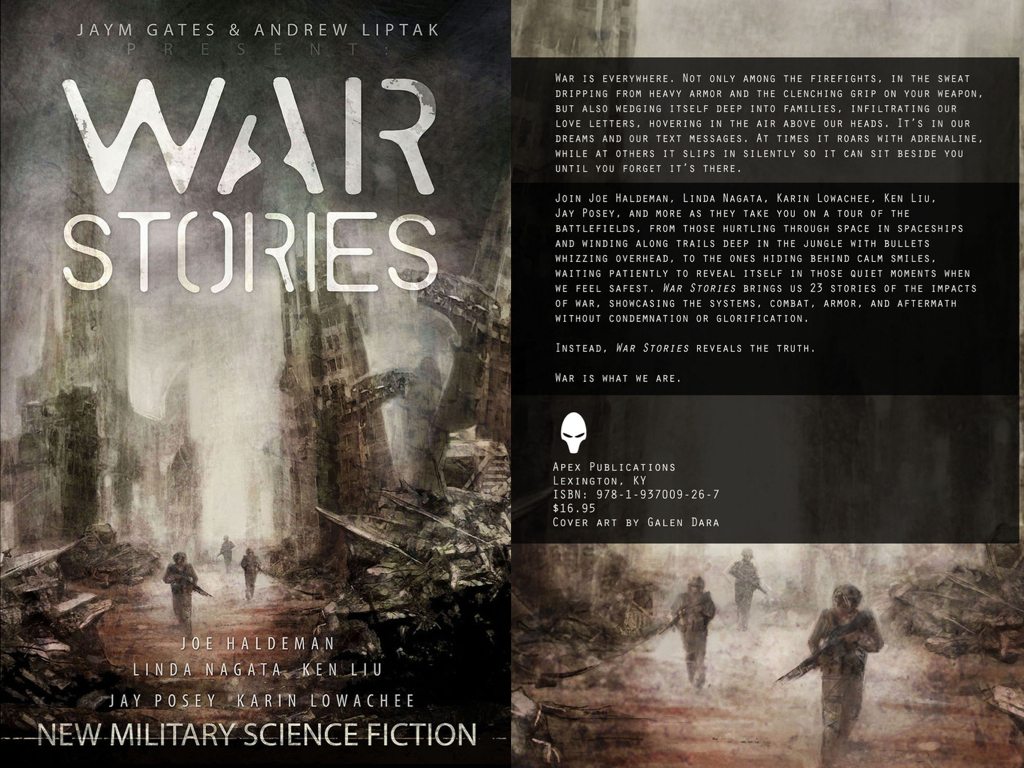 Each author brings a unique voice and a captivating point-of-view to a story in one of four sections:

My favorites from the bunch:

Graves by Joe Haldeman.  Haldeman is a favorite.  In fact, if you have not read The Forever War, stop reading this post and fix that…now.  In “Graves,” he spins the story of a soldier working for Graves Registration, a sort of CSI or mortician for a branch of the military.  On a field call involving a suspicious body, a firefight breaks out and the aftermath won’t shake loose from our protagonist’s mind.  It haunts his dreams, and so he avoids them as best he can.

Contractual Obligation by James L. Cambias.  A simple ex-fil mission gets complicated when Captain Yamada runs into a thought-to-be-lost love interest.  Will a man who values the mission above all refuse to budge from the mission’s parameters, or risk failure on behalf of gallantry?

Invincible by Jay Posey.  The armed forces are able to clone soldiers and implant memory back-ups into the bodies so that death in the field is more of an inconvenience than a finality.  But with this seeming invincibility comes an unforeseen consequence.  What could possibly impinge upon the value of infinite lives…?

Suits by James Sutter.  A low-level, sheltered mech tech talks his way into the field.  What he experiences causes him to question the side he’s on: Is it the good one, or the wrong one? And how can a massacre occur with zero casualties? How will Halfie respond to the incongruities of combat?

Mission. Suit. Self. by Jake Kerr. Billy takes a short cut when establishing a perimeter and discovers his decision all but condemns a small, friendly village.  When his higher-ups ignore their pleas for help, Billy takes it upon himself.  But how can he recruit the others to his cause when their mission is to guard the perimeter and he fights beyond its borders?

Enemy States by Karin Lowachee. This is an emotional correspondence of sorts between a soldier trying to find an identity and ultimate purpose and a lover who wants him to come down from the stars.  Lowachee writes through a gamut of emotions and their expressions.  I got the distinct feeling afterwards that I’d earned a heightened sense of empathy for loved ones left behind when orders come through. Very moving piece.

All of the stories will hold you captive, leave you thinking and/or feeling, and drive you to keep turning the pages. I borrowed this copy from a friend, but hope to own it soon myself. It will join the ranks of books that I lend out with an insistence and, upon return, will seek discussion over. If you love sci-fi (Haven’t read the NPR Top 100 Sci-Fi/Fantasy post? Click this!) and all the facets of war, this is a must read.

I give it a bold but worthy 10 out of 10 nerds. You can buy War Stories here.

Reviewing Izanami’s Choice, a Book about Samurai and…