After last week’s Eugene centric episode of The Walking Dead, this week’s episode (s5e6) – Consumed – shifts to a couple of fan-favorite characters.

Obviously, spoilers ahead for this and previous episodes of The Walking Dead. 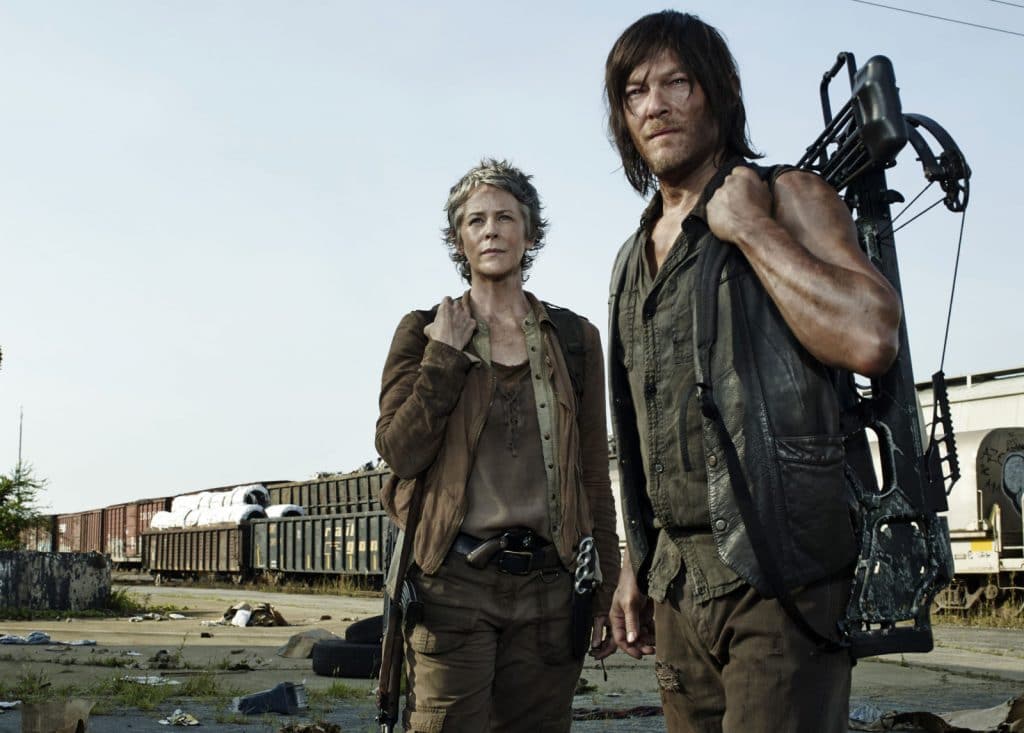 Structurally, this episode focusing on Daryl and Carol may have had the least amount of dialogue since way back when Rick woke up from his coma.  It is interesting storytelling to be sure but it also made the episode feel like it was moving really slowly.  After the dialogue heavy episode last week focusing on Abraham and Team DC, it was definitely a dramatic shift in storytelling.  But it used some of the same patterns as well.  Like the flashbacks…

Which is how the episode opens with Carol being banished from the prison by Rick.  After driving away, there is a moment where Carol is weeping, which is the closest thing to remorse that we have seen from her since that point.  Carol had been portrayed as hardened, merciless, doing whatever it takes to survive in this world.  Yet, this shows us a different side.

She eventually gets her stuff together and holes up in a law office. (Fun fact: the writer of these recaps grew up in the small town where they film The Walking Dead and his first job was on the payroll of this law firm, though he worked in the courthouse across the street.)  She is surviving and eventually we see her driving with the prison on fire reflected in the windshield.

The story shifts back to the current time, as Carol and Daryl are trailing the car up I-85 into the heart of Atlanta.  As they keep their distance, they see a police officer get out, do some things and then drive away.  As they attempt to follow, they are out of gas.  But Carol knows a place where they can stay.  They break into what is a facility for temporary housing for people dealing with domestic abuse.  Carol has been here before and they hole up for the night.

Daryl and she talk about whether people can really get a new start in this world, becoming different.  Daryl talks about trying to and Carol wonders if the balance of the world has tipped to the point that they don’t get to help rescue others anymore, that they will only be able to defend themselves.  After Carol falls asleep, she wakes in the new day with Daryl burning the bodies from the facility (including, sadly, a child).

Our next flashback is a simple scene of Tyrese and Carol burying the girls after the “Look at the Flowers” scene from last season that still makes my blood run cold.

Daryl and Carol are in downtown Atlanta and manage to get to a skybridge, where we learn that the most effective attack against a zombie is simply….a zipper.  Because we have zombies trapped in sleeping bags and tents.  They work their way through and find a nice office where they hole up and stare at a battle scarred Atlanta through the window.  They talk about wanting to start over when Daryl sees a van with the same cross, which is stuck on a bridge.  They head out.

And straight into the injured and scarred Noah from just a couple episodes ago, who takes the rifle from Carol and robs Daryl of his crossbow.  As Noah is running away, Carol goes to shoot him in the leg, but Daryl stops her. Which makes her livid.

Our next flashback is Carol standing over the burning bodies in the prison.

They manage to get to the van and are investigating when they get overrun with zombies, buckle up for safety and then ride the van to the bottom.  (More on my thoughts on this later.)

They then have a conversation about how things are changing.  Carol talks about her past, how she was in the abuse shelter but then went back to her husband and prayed for things to change.  In this world, she has learned that she can’t stand around and watch it happen, to watch everyone die.  The conversation is interrupted by noise, which leads to a zombie stuck with one of Daryl’s arrows and then machine gun fire.  Daryl and Carol then run into Noah, who they save for the moment.  A bookcase falls on Noah and Daryl takes a cigarette and then coldly leaves him to die at the hands of zombies that are about to break through.  Carol asks him to help; Daryl refuses.  When it appears he has left, a crossbow arrow kills the zombie.

Noah then talks about how he has to run, from the hospital people, which leads to them discovering that Beth is there.  As they are moving through the city and towards the hospital, Carol gets run over by a station wagon.  Noah manages to keep Daryl away, saying that the hospital people will help her, heal her, and there is nothing that they can do, because the Team Grady Hospital has “guns and people” to which Daryl says “So do we.”

The episode ends with Daryl and Noah driving a large cargo truck back in the direction of the church.

I give this week’s episode a solid 6 out of 8 Nerds.