Robots have long been an intriguing plot device in science fiction, and for good reason. I’ve long loved most those works that take what we have in reality and explore their extremes in fiction. It gives us an imaginative “in,” if you will; a jumping on point that makes sense and is easily assumed. From there, the authors or directors are able to whisk us off to places and scenarios unimagined.

Robots and machines serve well as that jumping on point. They are already capable of doing now what only man could do only twenty years ago, so what is the limit to their capabilities? Isaac Asimov masterfully toyed with that question and others in his I, Robot. More recently in the movie realm we had Ex Machina which delved even deeper into AI (artificial intelligence) and its eventualities and did so pretty darn well.

In Izanami’s Choice, Adam Heine plays well with the tension between artificial intelligence and human as the creators thereof. Just who is in control? 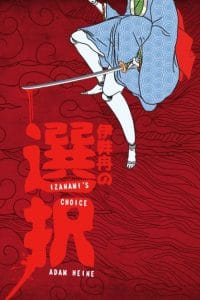 Its the year 1900.  Itaru Shimada is an ex-ronin, ex-cop working as a private investigator when a jinzou (a droid) named Gojusan asks for his help and protection.  His master has been killed, but his memory files during the murder have been restricted.  Itaru is unsettled by Gojusan’s failure to comply with his directives, and is even further unsettled when two droid assassin’s attempt to kill both Gojusan and himself.  Droids aren’t supposed to be able to defy their directives or attempt to kill a human being…

After fleeing the assassins, Itaru takes the droid to his daughter, Kano, who is an expert with jinzou design.  She unlocks the restricted memory, and the three are embroiled in an escalating mystery:

How is Gojusan able to act with such autonomy?

Who is responsible for Gojusan’s master’s death?

As the plot unfolds, the answers to these questions might spell doom for all of Japan, or possibly even the world.

I’ve got to confess that I was grateful this book clocked in at less than 100 pages…because otherwise I would have potentially lost a night’s sleep turning pages.  Once I started the book, I couldn’t put it down.  Heine does a great job of building a world replete with rules and history and uses both to construct a mystery with an awful lot of intrigue and surprise.

I’m a stickler for motivation when it comes to characters.  Why are they doing what they’re doing?  Itaru is extremely well motivated.  He’s got a reasonable hatred for the jinzou that colors his actions from beginning to end, giving him understandable resentment early on and later evolving into a strong watershed moment.  The tension between him and the droids help lend gravity to the plot twists – which are many and well orchestrated.  Itaru’s history may well determine the future of a nation.

Itaru is ultimately out to regain his honor after fleeing a battlefield instead of committing seppuku when he ranked among the samurai.  The pay off of his pursuit is simultaneously tragic and rewarding; a strong and befitting end to the story that satisfies.

The setting itself is really interesting, blending samurai and swords with droids and other futuristic technology.  It reminded me a lot of Samurai Jack, only without the time travel.  Although Itaru himself does feel anachronistic given his old school samurai ways.  But again, that is a curious strength of the narrative.  Heine even incorporates several Japanese words into the text as additional color (jinzou, for instance, means “artificial” or “manmade”) that I particularly enjoyed.  They even tend to swear in Japanese!

And as I alluded to earlier:  Heine has some fun with the ideas of robot apocalypses and creator/created dynamics.  Just as soon as you think he’s going one way with it, the plot thickens and one notion is scrapped for another.  I won’t spoil how things end, of course, but I cannot recall reading a similar conclusion and that alone is a selling point.  He takes a couple of schemas that have been well established in the genre and breaks them to pieces, creating something new and intriguing.

Available as en ebook for less than a cup of coffee, Izanami’s Choice is a worthy read. Able to be consumed in a single sitting, yes, but stimulating enough to warrant the $3 for sure. Heine did so much in so little space; its kind of amazing, really. I’ve read books three times as long with half the content.

Solid characters and characterization; succinct but great world building; mystery; treachery; plot twists. Its all here, and its all good!

Disclosure:  Nerds on Earth was provided a digital copy of Izanami’s Choice for review purposes. You can read our policy here. The drawing featured in this post was taken from anthdrawlogy.com, where the author is a contributor.