The crew encounter a pair of magical beasts imprisoned and begging for help, but with more secrets of Redlake Fort seemingly just out of reach, can these abused creatures be trusted?

This makes 65 quality episodes in a row! Click here to listen. Or better yet, click here to find them in iTunes to subscribe.  Like what you’re hearing?  Give the fellas a little love and drop a rating/review in iTunes for ’em! 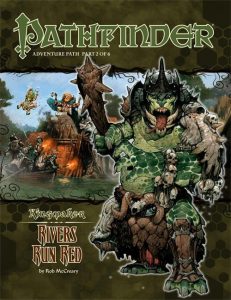