By Michael Adkins On Oct 5, 2016 Last updated Dec 31, 2020
"Good Popcorn" by y entonces is licensed under CC BY 2.0
Share TwitterReddItPinterestFacebookEmailPrint

Adkins Here’s the thing: You always hear people say that the book is better than the movie. Even when the movie is well done and well received, you’ll hear this phrase tossed about. But today we’re taking that phrase in a new direction: We’re looking at great books that were translated into terrible, awful, no-good movies.

Ross
Wanna start us off, Adkins?

Adkins
Sure thing. My beef lies squarely with Starship Troopers. 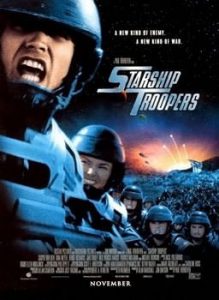 I read Heinlein’s novel as an adult long after I saw the movie, and I was an angry fan-boy long before I reached the back cover.

There is a lot of overlap between the two, to be sure. Names, places, events, etc.

And to be fair: A direct translation of the book to film just wouldn’t make for great visual entertainment, but that’s exactly the reason why I wish they’d left it alone.

Heinlein’s book is super polemical. A large portion of it actually takes place in a classroom setting and takes the form of philosophical dialoguing – which I love. The movie drops the vast majority of that in favor of YA tropes.

Ross I’ve got a lot to say about Heinlein, especially his writing style, but I agree 100% with your assessment.

It’s one thing to make an over-the-top action movie, but it’s a whole ‘nother animal when you claim its based on a very political satire.

Adkins Yup. And they reduced Rico’s character development to not much more than a girl-chaser. Then you’ve got the love triangle and heartache blah blah barf.

He’s a much stronger character in the book.

Joseph Yeah, Jeff from the Max is the worst!

Adkins See?! Joseph gets it.

Joseph Perhaps it’s because I haven’t read the book, but I did actually pick up on the political satire in the movie.

It might not be as overt or cutting in the movie as it is in the book, but I think it’s there.

All of the dispatches that go out giving updates on the war reminded me of the news alerts in 1984.

Ross Yeah, the satire isn’t absent, but the film leaves out the dozens and dozens of pages where Heinlein lectures the reader on the role of America in the international community.

Adkins And buries what is there under combat and romance.

So maybe it’s only fair that I give a disclaimer to my gripe: Heinlein’s novel is one of my favorites, but if you’re looking for something like the movie…maybe it isn’t the book for you.

But enough about Starship Troopers. What about you, Joseph?

Joseph Well, if you’ve got a little while, let me rant about The Hobbit. 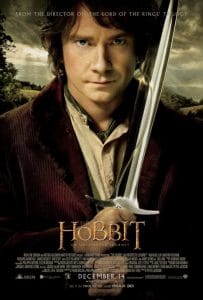 And by The Hobbit, I mean the bloated mess of a trilogy from former Tolkien hero Peter Jackson.

Adkins Oh, Lord. The curse of the apparent need to turn a 200 page book into 2+ movies strikes again.

Joseph Yeah… I own two editions of The Hobbit, and both are just over 300 pages. Within those 300 pages are 2-3 distinct segments of the story (one might say a beginning, middle, and end). So I’m not even super-opposed to turning it into a trilogy, although I still think that’s too much.

The problem is that The Hobbit is one of the most perfect books ever written. It is the quintessential transition book for kids moving from their first “chapter books” into their first real adult(ish) reads. Almost everything that Peter Jackson added to it was 1) completely unnecessary, and 2) completely stupid.

There are moments in the book where Gandalf is away for awhile, and then tells the Dwarves and Bilbo that he had to go join with the Council and investigate the darkness in Mirkwood. So that’s about the only thing that’s shown on-screen that’s not in the book that I appreciated.

Adding the female elf (her name is escaping me right now, because she’s NOT IN THE ACTUAL STORY) made sense only in that the movie had to pass the Bechdel Test, only IT DIDN’T because she was the only female character who mattered at all.

And giving her a love story with one of the Dwarves… Did we learn nothing from the friendship of Legolas and Gimli?!?! Elves and Dwarves DO NOT like each other.

And how about giving Thorin a goofy-looking orc warrior to have some history with?! That made only a little more sense than the Elf/Dwarf love story.

Oh, and did I mention that Peter Jackson turned a book that can be read in a rainy afternoon into THREE 2+ HOUR MOVIES?!?!

1) Her name is Tauriel. I knew this without having to Google it for one reason and one reason only: She’s played by the beautiful Evangeline Lily who I’ve been crushing on since Lost.

2) I love your statement that it is the perfect transition book! Never thought about it that way, but I totally see it.

3) What will readers of the book get that the movies don’t give?

Joseph For starters, a coherent story. All of the stuff that Peter Jackson threw into the movies only served to lengthen their running time and confuse the important parts of the narrative. Second, somehow the narrative voice of J.R.R. Tolkien came through in Jackson’s Lord of the Rings movies. But in the Hobbit movies, it feels like it’s Peter Jackson’s story, not Tolkien’s.

Adkins HA! Well argued, my friend. That leaves you, Ross.

Ross I’m glad you mentioned narrative voice, Joseph, because that is the biggest problem with the film 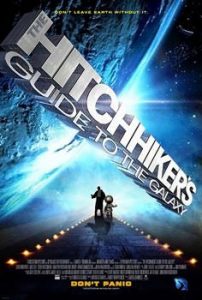 adaptation of The Hitchhiker’s Guide To the Galaxy.

I’ll preface by saying this: this is only one of two movies I’ve ever considered walking out of (the other being the Dragonball Z movie, which I saw on a plane. I’ll let you draw your own conclusions about the quality of that film)

The Douglas Adams novel was, for me (and I assume, many others) a formative text, both in terms of what science fiction could be, and what comedy could be.

The film version made the bold narrative choice to ignore all of that.

I will say: their attempts to incorporate the actual experts from the Guide were inspired.

Literally everything else was a chore.

Joseph That’s all from memory, man!

Ross Yeah, see!? There’s a lot of ability there!

Adkins I honestly never bothered with it because I knew there was no way the movie was going to capture the fun and quirks and comedy of the books based on the trailers I saw.

Ross Adkins, you’re absolutely right. The entire appeal of HGttG is the surreal nature of the storyline.

That’s difficult to communicate in a movie.

Adkins Do you think it could be done, or should Hollywood leave it shelved? With the rate at which they’re cranking out remakes and such, who knows? It could be next! Now’s your chance to head the executives off at the pass (because they totes read NoE).

Ross I say try again, but put it on TV! It’s the Golden Age of Television, man, I don’t know if you heard.

With all the other great HBO adaptations out there, I feel like somebody, ANYBODY could do a good job with Hitchhiker’s. Or Starship Troopers. Or even The Hobbit.

Adkins Serializing would definitely be interesting for Hitchhicker’s.

Joseph Ross, to play the devil’s advocate for a moment… Correct me if I’m wrong, but I seem to remember reading or hearing somewhere that Douglas Adams made fairly substantial changes to each iteration of the story (novel, radio drama, etc.).

Is what was different about the movie in line with those historical changes?

Ross I couldn’t speak to that, honestly, and that’s a failing on my part. What I will say is that whatever changes they made for the film robbed it of any joy, enthusiasm, and pleasure.

Adkins So the saying rings true: The books are always better than the movies. And that is especially true when the movie makers decide to go way off-book in their adaptations. Next time, hit your local library instead of the Redbox. You won’t be sorry.

Glass Cannon Podcast: Episode 71 – That Was Then, This Is Trunau

Why have comic book annuals become rare among today’s comics?