Recap and Review of Agents of SHIELD Episode 301: Laws of Nature

The show opens to mayhem, damage to buildings, fires, and more and it all starts in an apartment where we see Fish Oil pills strewn about. 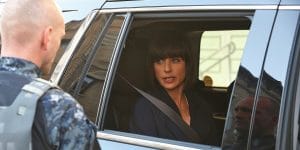 We eventually see Joey, a regular looking guy that is being pursued by a black ops team and everything he touches seems to be transforming: pipes melt, cars explode. And just as this black ops team is about to use lethal force, Daisy aka Skye aka Quake shows up with her own squad of Hunter and Mack.

They manage to evac Joey in a pod designed to be safe for him and Daisy talks him through the transformation, both on the ground and in a sweet new plane. After they evac, we see Coulson doing some paparazzi work, catching a picture of the lady behind the black ops team.

And in her debrief of her tactical team, we see what looks to be dissected, dead Inhumans at her base. 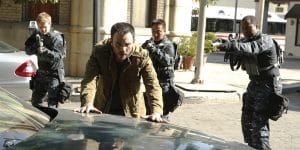 Once at the new SHIELD base, Bobbi talks with Joey through what happens next, encouraging him to know he is safe and that SHIELD will work through it with him. When Coulson, Mack and Lance debrief, we learn that the lady leading the black ops team has a long record of work for covert groups, but she doesn’t appear to be led by Hydra, who they can’t seem to find any information on.

Joey gets the rundown about alien genes, terrigen and the explanation about why he has his newfound powers. And then we get the darker side of the situation: Joey can’t go back to his old life and he doesn’t react well which ends with Daisy having to vibrate him.

Bobbi does the breakdown of how terrigen and they talk about how the Monolith hasn’t done something since it ate Simmons. They discuss how she is rehabbing, Coulson has lost his hand and how Fitz is “doing research” which we discover has him off in Morocco, where he is trying to trade something for information with a man named Yusaf. After a showdown and battle of wills with him, Yusaf gives Fitz the artifact that he came for. 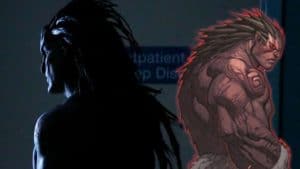 Daisy asks Coulson for permission to recruit Lincoln, who they had released into the free world. Coulson then goes hunting for Rosalind (leader of the black ops team) and we get two intertwined stories. Lincoln doesn’t want to leave his work as a doctor but suddenly a bruiser of an attacker comes, named Lash.

While Daisy and Lincoln hold their own, we see Lash kill a man as we also learn that Rosalind’s team wasn’t killing those dead bodies we saw, just collecting them after it is now presumed that Lash had killed them.

At SHIELD base, we then have three quick things happen.

And just as we see them all get to the place of accepting Jemma is dead….the closing scene is her running around on a blue-ish planet with a strange sky of planets, moons, and it looks like she has been there quite some time.

So this is a solid 9 out of 10 nerds episode. Every season opener is going to have to be an exposition dump at times but this one was well done and it sets up a variety of things for the coming season or half season at least.  Look at the list:

That is a great deal of work for one episode and the writers managed to do it quite well.

And a couple more quick notes:

Chloe Bennet as Daisy and Iain De Caestecker as Fitz deserve some kudos. They carry some of the toughest emotional weight of this episode and if you go back and watch the first season, they have developed and matured as actors.

Science Bobbi Morse was well done. I was glad to see them work this into this episode because one of the best parts of this character in the Marvel comic book world is that she is equally smart as she is deadly.

They did a nice job again of referencing the Marvel Cinematic Universe without being a slave to it. You got Avengers, Thor, Ultron, and Ant-Man references and it is worth whatever they had to pay to get the same guy who plays the President in the movies play him for the press conference.

Level Up Your Stats with Nerdy Workouts