A Marvel Comics creation, the Infinity Stones were previously called the Infinity Gems, but were originally referred to as the Soul Gems. Got that?

The stones are immensely powerful individually, but whoever holds all six gems and uses them collectively, such as in the Infinity Gauntlet, gains virtually unlimited power and is contractually obligated to cackle like a villain. Usually, the villain is Thanos, which is why he has appeared in approximately 143 Marvel movie post-credits scenes.

Each indestructible gem is a small, smooth oval, and is known by the distinct power it possesses. I’ll sum up:

BIG MOMENT 1: Although all six gems had appeared during a Thanos storyline in an Avengers Annual, it was the limited series Thanos Quest where Thanos refers to the entire set as Infinity Gems for the first time as well as revealing their origin.

As the story goes, Nemesis, a lonely omnipotent being is unable to endure eternity alone. As a result, Nemesis commits suicide, fractioning her being into what becomes the Infinity Gems. They go into the possession of the Elders of the Universe, but Thanos systematically subdued the Elders one by one, gathering all six gems.

BIG MOMENT 2: In the Infinity Gauntlet limited series, Thanos assembles all six gems into a gauntlet, then uses it to erase half the population of the universe. Why did the Mad Titan destroy half of the universe’s population? Well, like Bryan Adams, Thanos does it all for love.

This makes sense when you realize that Thanos’ love is Lady Death, and she felt it was a cosmic imbalance that there were currently more sentient beings alive than had ever died in all of history. Thanos goes on to own Earth’s heroes in combat when they attack him in retaliation. But Thanos knew deep down that he wasn’t worthy all that power, so he subconsciously allows himself to be subdued in an ethereal form, which allows him to be stripped of the gauntlet. (You can find Infinity Gauntlet on Amazon.)

BIG MOMENT 3: In the New Avengers: Illuminati limited series all six stones become the possessions of the superhuman group the Illuminati – Iron Man, Sub-Mariner, Doctor Strange, Black Bolt, Reed Richards, and Professor Xavier. One Gem is placed in the care of an Illuminati member, who vows never to use it or reveal its location. Eventually, this goes sideways, of course. (On Amazon.)

The Infinity Stones in the Marvel Cinematic Universe

This brings us to the moment we have been waiting for: how the Infinity Stones have been rebranded as the Infinite Six for the Marvel Cinematic Universe, beginning with 2011’s Thor. 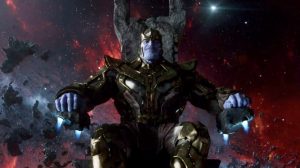 That leaves only two Infinity Stones to be featured: the Soul Stone and the Time Stone. It is likely that 2016’s Doctor Strange movie may feature a Stone since Strange’s magic will likely have a connection to the Marvel Cinematic Universe’s cosmic storylines.

Also highly likely is that Thor: Ragnarok will feature one as well, given that Thor flew back to Asgard at the end of Avengers: Age of Ultron to learn more about the Infinity Stones.

Then we can expect the six Infinity Stones to come together when Thanos obtains them just in time for Avengers: Infinity War parts 1 and 2.

Recap and Review of Agents of SHIELD Episode 301: Laws of Nature