The Dresden Files is a series of fantasy/crime novels written by Jim Butcher. Set in modern day Chicago, the main character is a private investigator named Harry Dresden.

Harry Dresden is also a wizard.

In the world of The Dresden Files, magic is real, as are demons, ghosts, vampires, werewolves, and probably the chupacabra, although I can’t recall if that has ever appeared in a Dresden Files book. Among the average people in Harry’s world there is an obvious skepticism toward the supernatural, so Harry consistently solves crimes and mysteries on the sly, working as the world’s only “consulting wizard,” accepting supernatural cases from both the Chicago Police Department’s Special Investigation Unit as well as some non-human clients.

The familiar trope of good-hearted wizard battling against dark magic is a classic, yet The Dresden Files give it a twist with the modern setting (Harry’s staff is reimagined as a hockey stick; his wand is a drum stick.). As one would expect, this creates a series of adventures and mysteries, as well as giving The Dresden Files a pretty cool “freak of the week” type vibe. In short, they are great fun. 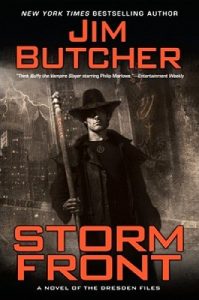 The Dresden Files have turned into a big ‘ole thing at this point, having branched into a variety of media types and outlets. I’ll sum up:

Books or Television Show: Where should I start with The Dresden Files?!?

The Dresden Files is certainly one of those cases where the books are better than the movie, but I don’t want to fully discount the television show, as it’s obvious strength is no reading.

As for the books, Harry as a first-person narrator is distracting at times, but that’s the only quibble. The characterization is excellent, the plots zip along, the stories are full of interesting and amazing things, and Jim Butcher’s skill as a writer on increases as the series goes on.

In addition to the above credentials, the private eye investigations being mashed up with the world of the supernatural is great fun. Not only are the cases and Harry’s relationship with the Chicago PD engaging, but Jim Butcher’s written examinations for magic and wizardly are well done.

In other words, there is a good reason that the series has lasted 15+ novels. 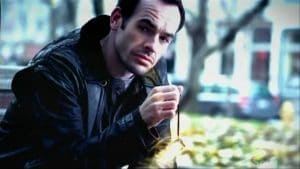 But we all want even more wizardry in our lives, so I recommend the television show as well. Lasting just one season, the TV show stars Paul Blackthorne, who is excellent as the title character. Ghostly Bob, Warden Morgan, and Lt. Connie Murphy are excellent as well.

Make no mistake, this is a SyFy show and SyFy has rightly earned the reputation for poor production and mismanagement of their series. This is true of The Dresden Files as well, an example being that the episodes aired out of order, with the pilot (Storm Front) airing as episode 8.

But despite the cheesy SyFy production values and their mismanagement of the franchise, the same great characters are there. And for a show that features a crime solving wizard, I’m not seeking high art, it’s entertainment I’m after. The Dresden Files television show is entertaining and with only one season, it’s an easy binge.

Regardless of if you are a book or TV person, I do highly recommend you give The Dresden Files a try. It’s filled with great characters, fun stories, and imaginative situations. If you are curious about the books, you can start here. The TV show can be found via Hulu or Netflix. Now go get your nerd on.

Thanks for reading. If you’ve enjoyed Nerds on Earth, please help us spread the nerd love by using the social media buttons located around the site.