A few of the NoE staff are chronic character creators. We roll up PCs for Pathfinder or Dungeons and Dragons on the regs–oft times mapping out their full progression from Level 1 to Level 20 including feats, stats, abilities, et al.

You might be just like us Earth Nerds, but its far more likely you’re not. Maybe you suffer from decidophobia and just have a hard time choosing the character combination that is just right for you. For those undecided, we’ve got the Party of Five posts wherein we give you five readymade character ideas whose powers combine to make a pretty balanced party for any adventure.

1.   Kalla Oloore.  I have actually written a full backstory story for Kalla and a custom background; both
of which you’re free to use, of course. The background would definitely need DM/GM approval since it isn’t in the PHB.

Kalla might prove a bit of a challenge for someone brand new to D&D because of the tension between her own Alignment and that of her fiendish patron, but I’ll be darned if it wouldn’t make for some good storytelling!

She rocks no armor because she can cast Mage Armor on herself at will without expending a spell slot or any material components.  So long as you stay on top of keeping it “turned on,” her AC will be 15.  She’s primarily designed for ranged combat, but if enemies get close she has Mirror Image to fall back on to confuse the combatants and buy herself some time to fight back with her quarterstaff if need be.

Kalla’s stat block is below or you can download her full character sheet here, courtesy of Hero Lab.

2.  Blythe Turk.  Blythe is my idea of the wily and charismatic sneakster. She does her best to keep to the shadows, but if she’s spotted violence isn’t her only – or maybe even primary – recourse.  She’s high in Dexterity (duh), Charisma (for those Persuasion checks), and Intelligence (her spell casting ability stat).

She is built along the Arcane Trickster path for access specifically to the Charm Person spell. And she is not above using the subtle art of seduction to her advantage! She’s supremely quick-thinking and is always ready with a believable story for her whereabouts and activities to suppress suspicion, but she’s handy with a blade and bow, too.

Check out Blythe’s stats below or download her character sheet here! 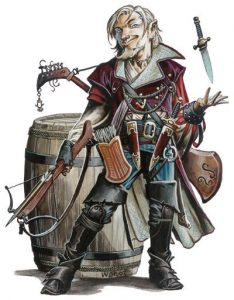 [dramatic break in shame for picking the low hanging fruit]

…his ability to affect the battlefield is impressive.  He and Junto (below) have been paling around for quite some time and work wonders as a pair. His favorite strategy is to cast Heroism on the raging Junto, granting him temporary HP that is effectively doubled given his friend’s damage resistances in that state.

He is also one heck of a debuffer with spells and cantrips like Vicious Mockery, Bane, and Dissonant Whispers. Nimble Dick also has a couple means of restoring health to his comrades. On top of all that, he is a bit of a jake-of-all-trades since he went with the College of Lore. I’d play him as the face or head of public relations for this motley crew.

4.  Junto. He gets up close and he rages often; soaking up damage like a sponge and dishing it out 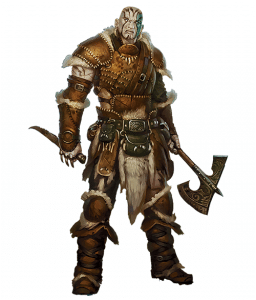 just as readily and easily. He and Nimble Dick have been an inseparable pair for years in a mutually beneficial arrangement: Nimble keeps Junto alive so Junto can do what he loves best – fight right in the thick of things.

Junto is a simple melee character that is perfect for someone who just wants to smash things – a trait found in many young and/or first time players. On top of damage resistances while raging, Junto can shrug off 1d12 damage once per short rest like it never happened. And you better believe he uses Reckless Attack pretty much every time he swings his Greataxe while raging!

Junto’s stats are shown below, or you can download his character sheet and make him your own.  He does venture beyond the PHB a bit given his Goliath race, but you can download the Elemental Evil Player’s Companion (from which he comes) here for free!

5.  Gregor the Bold of Sundabar.  Gregor was only recently knighted and so is embarking on his very 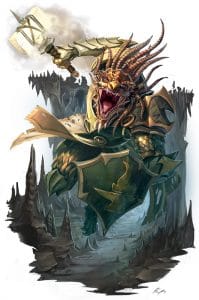 first pilgrimage of general do-goodery. He is a savage fighter who trusts his Chainmail to deflect most blows intended to cause him great harm.

He splits his utility on the playing field evenly between devastating blows with his Flail (oftentimes bolstered with Searing or Wrathful Smite) and lending aid to his companions with the likes of Bane, Cure Wounds, Lay on of Hands, and Protection. He commands quite the presence, and so often ends up Frightening his enemies when he brandishes his holy symbol – sending them running for the hills.

And the gods forbid enemies cluster together neatly enough for this battle-savvy Dragonborn to unleash his Breath Weapon.

Download Gregor’s full character sheet here to take him adventuring with you and check out his stat block below.

Two healers, plenty of range potential, all sorts of debuffs, front line brawlers, fast talkers, and oodles of damage potential make this party viable and fairly well balanced. Give them a go–as a group or just your favorite single character–during your next campaign for a quick grab-and-go build, courtesy of Nerds on Earth.