Time after time players are invited to arrive 30 minutes early with the goal to quickly roll up a character. Fourteen hours later all your snacks have been reduced to crumbs, you’re down a sixer of ginger beer, and the new guy is still dithering back and forth on whether their character should be a half-orc or a halfling…a sorcerer or a wizard…or if they’ll use a bow or a falchion. It can drive a D&D group bonkers.

By the way, if it’s your turn to bring snacks for your D&D group, bring something everyone can enjoy, because Bob can’t have gluten.

Party of Five are 5 ready-made character ideas that might help players more quickly generate a PC they are stoked to play. The 5 characters below need only a Player’s Handbook.

Party of Five! Ideas for a Full Adventuring Party of D&D Players 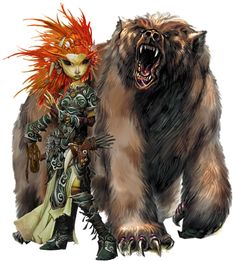 1.  Skarlett TottenHall and Sobig are an odd pairing: a gnome ranger and her big brown bear companion. Armed with a sling staff no longer than a baton, Skarlett is jovial and entirely competent, even if she is often mistaken for a  child.

Skarlett would be perfect for a player who wanted to play a ranged class that might not do a ton of damage, but has a lot of utility and makes for light-hearted role playing. Plus, having a brown bear companion is nice (use a typical stat brown bear stat block for Sobig).

Scarlett’s quick stat block is below or you can download a full character sheet, courtesy of Hero Lab. 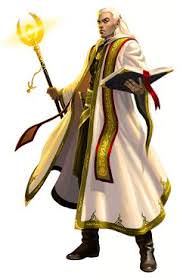 2. Roentgen Elbatan is a famed wizard with eroded powers due to being kept feeble minded as a prisoner of war. Once well known for his prowess and vast skill, Roentgen is now level 1, having had his best years stolen from him.

Roentgen would be interesting to role play in that it is easy to imagine the frustration he must feel in having lost so much. But there would be certain satisfaction as well, in that it would be a delight to witness the power return to Roentgen as he again increased in levels and could have the old spells returned to him, having them been stolen from him.

Players will want to slowly unfold his backstory (Where was his fame? How was he captured? Who held him prisoner?), as I simply used generic copy to generate the character. Download Roentgen’s character sheet. 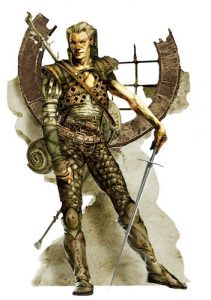 Pheldyne Brahe is a half-elf bard who doesn’t stray too far from stereotypes. He’s flashy and there is no limit to the amount of attention that he’ll attempt to draw to himself. He talks non-stop, but it seems as if he never says much of value.

Yet he is loyal and there is no questioning that he makes the adventurers around him much better, bringing out the best in them.

Besides, he also has the best one liners and insults.

Pheldyne is great for the role player who wants to play it loose and swashbuckle(y), plus has the sense of humor to pull off good-natured banter. Pheldyne’s quick stat block is below or you can download his full character sheet, again, courtesy of Hero Lab. 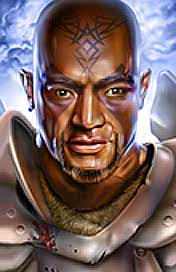 Didier Hutu is a human cleric (modeled after a Burundian profile) who serves Ilmater. Didier chose the life domain, which means he would serve as an excellent healer for the party.

Didier grew up in the service of a great and honorable cleric, who was a devout defender of the common people. But his master was executed by a group who rose to power through force and exploitation. Didier was separated by his fellow acolytes, and adventures both to defend the common people, as well as one day be united with his companions.

Didier’s stat block is below, but here is a full character sheet.

5. Cainen Szilard, a tiefling paladin plays entirely against stereotypes. Despite casting an imposing and intimidating appearance, there is none more noble and righteous than Paladin Szilard. A staunch defender of the weak, Paladin Szilard eschews his noble background, instead dedicating his life to putting himself into danger in his fight against evil.

Download a full character sheet or use the simple stat block below.

With a front line defender, a healer, a spell user, and two support characters, the above can be a ready made party of 5. Players will undoubtedly want to make tweaks in order to make these characters their own, but these characters are nice to get players started quickly. And none venture beyond the basic rules or the Player’s Handbook.