I’m Not Crying…You’re Crying! A Look at a Powerful Moment from Extraordinary X-Men #17

Today I sat in the sound booth of my church and fought back tears.

No, it wasn’t the event I was running sound for. It was the comic I was reading.

From the very first page of the very first issue of this Extraordinary X-Men run, Storm is conflicted.  She’s running the Jean Grey School and she’s not sure she’s doing it well.

She knows she wants to keep the mutants safe. To that end, she had several powerful magicians (including Magik and Doctor Strange) transport the school to Limbo–away from the threat of the Terrigen Mists and humankind who have come to fear mutants and Inhumans alike as agents of a dangerous disease, m-pox.

But she calls her X-Men to her side and travels the globe snatching up new mutants and whisking them out of danger to the relative safety of X-Haven where they have triage tents overflowing with the victims of the lethal m-pox which threatens to bring mutantkind to the brink of extinction.

Storm is trying to be a hero. Her promise: to protect mutants.

And then there’s Alicia.

Alicia is trying to be a hero, too, but not to an entire species, but to an individual. Her sister, Maya, is dying from m-pox.

As Maya nears her last breath, Alicia sets out to arrange a meeting between her sister and her sister’s favorite hero: Storm.

With Storm embroiled in thoughts of an impending war, she proves too busy. Alicia, defeated, returns to her family’s tent outside of the school, but resolves anew before entering to uphold her promise to bring the leader of the X-Men to Maya’s bedside.

Extraordinary X-Men: The Newest Member of the X-Men

When Storm finally sits at Maya’s beside…I couldn’t hold back the tears.

The conversation Jeff Lemire writes here is among the most moving of any comic ever. And the setup for the moment itself is perfect.

Of all of the heroic deeds Storm has performed, the work she does at Maya’s bedside is the greatest of them all and I’d step into the ring in defense of that statement. She makes Maya an official member of the X-Men as Lucid–a codename Maya came up with herself.

You could fit the entire conversation inside of 4 tweets and it is downright powerful, and not just for us, the readers, but for both Maya and Storm.

Extraordinary X-Men: The Power of a Face 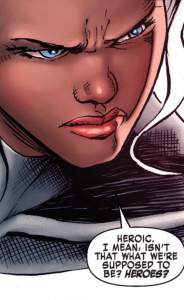 Storm emerges from the tent and immediately makes the declaration of war against the Inhumans that she’s been too conflicted to make up to this point, and I’d argue its because the war now had a face:  Maya’s.

It wasn’t the hundreds, maybe thousands, of mutants seeking refuge at X-Haven. It wasn’t the threat of extinction. Those factors were in play within Storm before the meeting with Maya and contributed to her conflicted feelings about what to do.

No, it was her understanding of what it means to be a hero. Maya’s fate showed her all the ways the X-Men had failed while trying to be heroes. Now she was going to “find a way.” Instead of trying to mitigate m-pox’s damage on the mutant population, she was going to war with the Inhumans and strike, instead, at its head.

Extraordinary X-Men #17: One For the Long Box 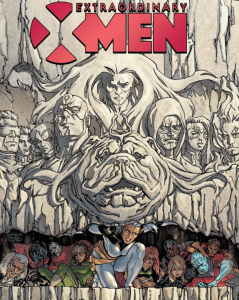 I don’t own many physical copies of comic books, but there are some pivotal issues or moments that I feel compelled to own and this one will join the ranks.

Extraordinary X-Men #17 is a jewel in the crown that is comic books; one whose story will stick with me forever.  Beautifully written, masterfully directed, and powerfully realized through art.

Just get a look at the cover, for gosh sakes (to the right)! Before you even crack it open, you’re told that Storm feels the weight of the Inhuman threat upon her shoulders, and hers alone. That she is all that stands between the mutants and extinction.

But you don’t see Maya, and I believe this issue proves that Storm must before she can do what she knows needs done.