Research is clear that humans aren’t at our best when multi-tasking. The American Psychological Society says, “Doing more than one task at a time, especially more than one complex task, takes a toll on productivity.”

But when it comes to the Explorers of the North Sea board game, a player has to multi-task. I’ll explain later. First, let’s cover the basics of the game.

Explorers of the North Sea 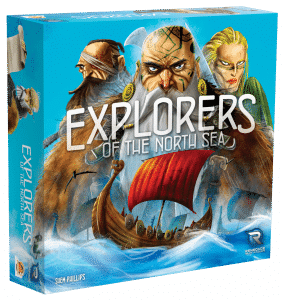 Explorers of the North Sea is game from the North Sea Saga, a collection of wonderful board games from Renegade Game Studios. In the game you are Vikings, seeking out new lands to settle in your longships. Moving the longships around a hex board of the players’ creation, you transport your Viking crew among the newly discovered islands to capture livestock, construct outposts, raid settlements, and sink rival ships.

Explorers of the North Sea is for 1-4 players, with a recommended age of 12+. Play time is about 45 minutes and you can get the game from Amazon, from Renegade direct, or best yet, from your FLGS. Let’s not spend any more time on an overview, as you can download the rulebook. Instead, let’s talk Muti-tasking.

Explorers of the North Sea

Explorers of the North Sea is really two games in one. Both aspects are fully realized and the whole thing works wonderfully.

The first action a player takes is to lay down a hex tile out of the three they hold in their hand. These hex tiles have a portion of an island on them and players must rotate the tiles and consider different placement areas to make sure that land masses line up.

I love this aspect of the game. I’m a spacial thinker. I kill at Tetris; I can pack a trunk like a boss. I will also have you know that I hold a state math record in an area that included geometric pattern recognition. *ahem*

I should now confess that they disbanded the competition the next year, eliminating any opportunity for others to best my score. And I also went to school in West Virginia, so it’s really not that impressive.

But, again, I loved the tile-laying aspect and my wife thought it was implemented excellently as well. We played two games last week and the variety created by crafting the board out of hex tiles meant that the two games were wildly different.

Second, the pick up and deliver aspect of Explorers of the North Sea is nicely implemented as well. A combination of three Vikings or livestock meeples can be in your cute little Viking ship playing piece at a time, so players need to be crafty in planning out their moves so they can raid settlements and load up their ships with livestock, delivering them back to your chieftain.

Add it all together and you have a wonderful board game in Explorers of the North Sea. Apologies to the American Psychological Society, but multi-tasking is required in the game, as players need to keep an eye on the map as it is being built, while keeping their other eye on the amount of turns they have so they can pick up and deliver goods. But rather than making a player go cross-eyed by diverting their attention in two different directions, the game brings it all together into a single, wholly satisfying game.

I could go on, but I’d just be typing hundreds of more words to tell you that’s it’s a great game and one that absolutely should be considered for your collection. Don’t hesitate to give Explorers of the North Sea a try.