A recent scientific study from the minds at Harvard, Stanford, and Wakanda University or something, recently proved that it is a million percent more fun to play with miniatures during your D&D games than to play without them. But even if science can’t prove it, we know it to be true in our hearts.

So I will introduce you to the latest set of pre-painted miniatures for D&D, then I’ll give you an overview on what else is available. Because it is never too late to build a killer D&D miniatures collection.

An Introduction to Wizkids Pre-painted Miniatures 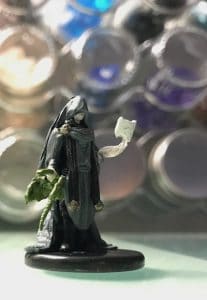 If you are looking for pre-painted miniatures, there is really no relevant competition to Wizkids. Sure, there are niche hobby-house miniatures companies that do fine work. Or you can buy unpainted brands or custom order a 3D printed mini, but you’d then have to paint them yourself or commission someone else to paint it.

Yet, most folks are looking to get started with miniatures that are ready to go out of the box. Look no further than Wizkids. So let’s talk about their lines of figures.

The upcoming release from Wizkids is the Icons of the Realms: Waterdeep: Dragon Heist set of 44 miniatures that are sold in blind boosters that contain 4 figures, a large and three mediums. That’s a lot of colons in that title, so let’s tackle them one-by-one.

See below for a video that features an unboxing of some of the Icons of the Realms: Waterdeep: Dragon Heist miniatures from Wizkids. The video also features my youngest daughter bouncing down the steps midway through the video to try and get her little sticky mitts on all the figures.

As I said, the “Dragon Heist” set is one of many sets from Wizkids. (Find them all here.) Previous sets for D&D include Tomb of Annihilation that had figures associated with the Forgotten Realms area of Chult and the Monster Menagerie sets that feature monsters.

But it’s the Pathfinder Battles line that has more variety in theming.

And there are MANY more. I think the Pathfinder Battles line has at least 10 sets with more on the way. Unfortunately, some are out of print but check with your FLGS or online with Paizo.

All nerds should at least buy a couple boosters to give the figures a try. They come out to just about $4 a figure, which is remarkable, considering you are getting a really sharp paint job with the minis.

But although opening boosters is fun, most nerds want to get a particular individual figure. That’s why it is important to know there is a healthy secondary market for Wizkids figures, giving us nerds a place to buy them one figure at a time.

I go into much more detail here, but the gist is to visit a site like Cool Stuff Inc. Search “elf” or “goblin” or “wizard” or what have you and you will have each of the hundreds of Wizkids figures at your door in a few days. This is a great way to fill in a collection or simply pick out that perfect character look for your next PC. I’ve gotten loads of minis this way. Your FLGS might even sell singles, so ask them as well.

The point is that us nerds shouldn’t slap science in the face. We need painted minis at our tables! And Wizkids has us covered with that.