A few weeks ago, I did a general review of the new miniatures racing game Gaslands. Latecomers can check the review out by clicking here, but for those not inclined to click blindly, here’s the basic gist:

Gaslands is simple,fun, and the best kind of bonkers.

The game provides many scenarios for players to try, but the general consensus around Charlotte game stores has been that the basic Death Race game is awesome enough that most groups haven’t moved past it. As an adventurous gamer, I laugh at such rigidity. Along with a few other friends, we embarked on a journey into the wasteland in search of zombies to run over. 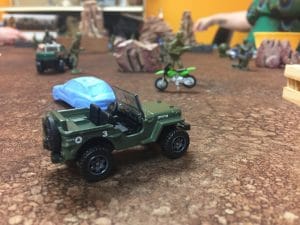 Within the mythology of post-apocalyptic landscape of Gaslands, the United States are officially known as the Irradiated States of America. Presumably, the United States was pulverized in a nuclear war, but that does not mean the former superpower is quiet. Far from it. Zombie hoards now roam the land. I guess it’s boring to simply mow them down. Some enterprising Martian executive must have thought running over these ghoulish flesheaters would make for good television for Gaslands.

The object of Zombie Bash is to run over as many zombies as you can to earn points. For each driver, there are 10 zombies placed randomly, yet equally dispersed, on the board. Zombies can be 15-20MM miniatures or your typical plastic green army soldier that can be found just about anywhere. We opted for the latter.

Players then roll for pole position, which changes clockwise with each new gear phase. This determines who gets to setup along the edge of the board. Unlike Death Race, there aren’t necessarily gates for drivers to go under. The board is wide open Players take turns to deploy their vehicles, making sure that their vehicle(s) is not within double range of another opponent’s vehicle(s) and within short range of their own friendly vehicles. Once the board is set, it’s time to race. 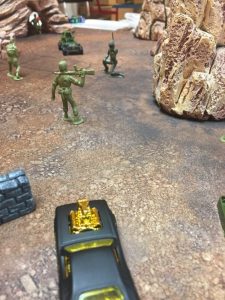 Once the race begins, the goal is to collect as many zombies as possible. Vehicles can’t attack zombies to get points. Players must either run them over using the motion of their movement template and/or have their vehicle’s final position touch a zombie. Each zombie is worth one point. The game ends when all zombies have been collected…or the store closes, as was our experience. However, we were really close to finishing, with only three flesh eaters roaming around the board.

Full disclosure: I totally won! I had run over 20 zombies, with the next

highest being 7. It was a good night for Team Morgan. I focused on speed and less on brute offensive capability so I could whip around the course. I used two performance cars, Goldie and Dead Rat. The zombies never stood a chance.

Though the game lasted over three hours, it felt more exciting watching and playing Zombie Bash than Death Race. It was very entertaining to see how other players tried to collect points. Slides and Spins played a more tactical role in Zombie Bash. While players generally want to avoid Slides and Spins for the most part in Death Race, moving crazily around the board might actually help players gather more zombies. Timely (and crazy) slides and whipping around to change directions is how I got several of my zombies. 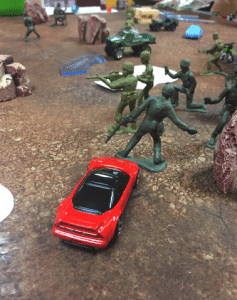 The emphasis on getting zombies did take away from the general mayhem of trying to kill the other players, but only a little. While the focus was on running over zombies, there was a fair amount of shooting at other players, ramming them, and of course placing oil slicks and mines everywhere to mess with everyone’s timing. Attacking can seem like an afterthought in this scenario, but it can be beneficial in the quest to collect zombies.

Wrecking a vehicle means that the player must drop five of their own zombies within short range of their wrecked vehicles. That sort of cluster of zombies leaves a very tempting lump of points that are just begging to be taken. I wrecked another player and in one turn collected all five zombies that they dropped.

It might be an unpopular opinion in the Charlotte Gaslands community, but I actually liked Zombie Bash better than Death Race. Don’t get me wrong, both Death Race and Zombie Bash are maniacally fun, but Zombie Bash adds another layer of insanity to an already crazy game. Putting the focus on gathering as many Zombie points as you can while avoiding molotov cocktails and machine gun fire from others adds a new outlook on strategy for the game.

Gaslands can (and should) be purchased from Amazon, Osprey Games, or your awesome Friendly Local Gaming Stores!