When I recently returned to the realm of tabletop roleplaying games, I felt confident that I would be able to live a better existence as a player than I had as a kid. I mean, surely technology and my wallet had expanded enough to allow me to create whatever I wanted.

And sure enough, not long after returning to the game, I made the decision to visit the website Hero Forge and have some of my party created as custom miniatures.

Hero Forge is a website that allows you to customize miniature figures, then have them printed and shipped directly to you. They have tons of potential characters, poses, armor, weapon and more to create the exact character you want. For our party, we need to create a Goliath Ranger, a Dragonborn Paladin and a Water Genasi Cleric.

When you first get on the site, it can be a bit overwhelming. You have choices of genres and races. Then under each race there are tons of choices. You can adjust your appearance with everything from your expression and facial hair to clothing to hairstyles to weapons being carried.

There are literally hundreds of options. 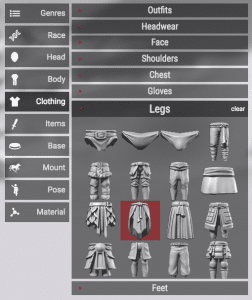 For our party, it was relatively easy to put together the group. While I wish I could have made the Goliath a bit taller, using the large human frame maxed out and it worked fine. From there, I equipped them as I had been playing each character and then you have the ability to look at your figure. You can spin the figure and look at it from all kinds of angles before finalizing it. 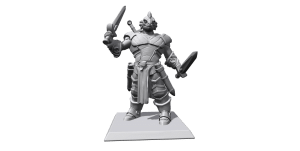 I found that the ability to look at it from different perspectives really helps you get a better feel of what the figure would look like. Here you can see a screen capture of my dual wielding Dragonborn Paladin, Mal, who is currently hunting down relics and treasures as he prepares to kill the cursed vampire Strahd. (Shush. No spoilers.)

So after the design, it’s time to order the character miniature. Hero Forge sells the figures mostly in 30mm size, but they also offer it at 2X and 4X. You also need to determine the material you are going to have the figure printed in.  The basic format is plastic nylon and most figures will run you $14.99. There is also a premium plastic, where the figures rise to $29.99, steel at $34.99 and bronze at $99.99. Each type has pros and cons and the site does a nice job of helping you decide on what you want to do long term in terms of painting the figure or not. 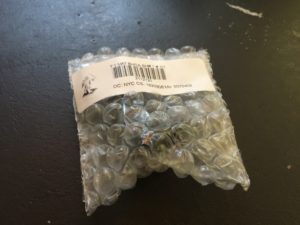 I ordered the three figures. In an Amazon Prime world, it definitely wasn’t fast. My guess would be that they are printing these and shipping them from a land far across the sea from America. The figures come well packaged, with each being packaged in a bubble wrap container, and a ziplock bag. Further, all the figures were wrapped together in a box and well protected.

All of the figures that I ordered were great. We did have an issue with our cleric, whose spear proved to be too thin and broke during shipping. That said, the customer service was excellent and wanted to know what they could do to replace it AND make sure the spear was made more sturdy.

The turnaround time seemed a bit faster as well, which impressed me. Finally, Hero Forge saves your characters, so if you ever decide to reprint or adjust them, they are still available.

Are Hero Forge Miniatures Worth It? 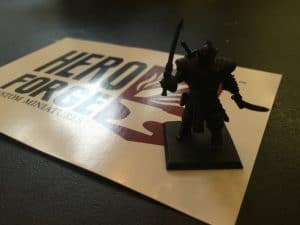 Now, all of that said, is Hero Forge worth the investment? For the basic plastic and next tier up, if you have a character you really like and a generally kind hearted DM who isn’t into killing characters, it might make sense to buy the character.

When you look at what unpainted figures run on Amazon, and you add in the ability to completely customize it, it isn’t an awful expense. That said, I could only see buying a metal version under circumstances where it was a gift to someone who was moving away and couldn’t play with your crew anymore.

Because of the customization possibilities, the relatively reasonable price points and the chance to make exactly what you want, Hero Forge gets a 8 out of 10 Nerds.

What is your experience with Hero Forge minis?  Drop in to our Character Sheets Facebook Group (which is dedicated to all things TTRPG) and let us know!