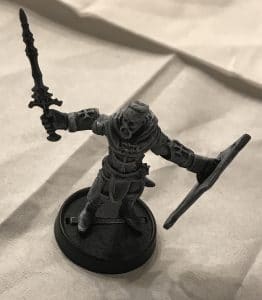 If you are into tabletop roleplaying games and use maps, you want a miniature. But if you really like your character and want to have a character that is just right, it can be a challenge.

Sure, you can search Amazon and various other sites hoping to score your female dwarf dual hammer wielding miniature. But chances are slim. And while we have reviewed Hero Forge before, that is a lot of coin for a single miniature that doesn’t grant you much flexibility. In order to fill in the gap, Hand of Glory has a current Kickstarter effort that is really intriguing: they have miniatures that have different hand attachments that are swappable.

In full disclosure, Hand of Glory sent me two of the prototypes of the figures to test and review. So, when the box arrived, I was keen to test them out with my weekly Thursday night group. I received the cleric figure and the demon figure that they show on their site.

Without a doubt, these figure do have a fun “Wow” factor. Nearly everyone at my table wanted to picked up the figures, rearrange the 11 attachments that came with the figures and play with them. A couple of things stood out about the figures right away that are positive.

That said, there are some things that I hope get improved on in the final production. 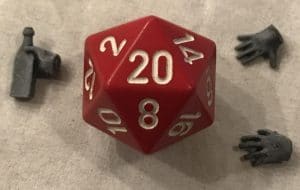 These pieces are really small. I put them here beside a normal sized d20 and you can see the hand pieces themselves are epically small. If you were to buy the full set, there is a legitimate concern on how to store all the small pieces and not lose them.

If I were going to try and improve the prototype, I’d swap it so that the magnets are in the hands and the steel in the figures, but I recognize that would increase costs. But getting a thin piece of metal that you could attach all the magnetic hands on would be an easy solution; as it stands, the odds are you are going to lose these smaller pieces pretty easily.

Or if they were providing some sort of easy storage system for them, it would help make me more inclined to purchase a full set. And in regards to the magnets, I wish they were a little bit stronger. There isn’t quite the satisfying click that you want when a piece is being attached. And if you try and move a figure by an attached weapon for instance, you get a spinning piece. To be fair, it doesn’t disconnect, but it does feel like it could be attached stronger. A stronger magnet might rectify that. 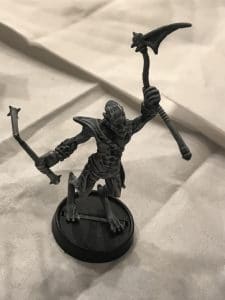 So, on the whole, this is a cool product and I hope that there are some improvements on the prototype as it heads to production. As of the time of this writing, you could support this kickstarter, get 9 hero miniatures, 2 villain miniatures and a slew of attachments for $140 dollars. And while that isn’t cheap, if you look at miniatures that you can’t adapt it would be obviously cheaper, having a whole set of these as a game master makes a lot of sense.

Pretty easily, you can spin together some figures that are pretty close to what your characters are and equipped with and get to gaming. And if you are a PC have one character class you really love and are okay with the basic weapons sets, you can pick up a figure for a $20 pledge or 3 figures for a $55 pledge, which places it as a far cheaper and more adaptable version compared to Hero Forge.

You can definitely check out the Kickstarter that they have going, where they are collecting pledges until August 11, 2017.

Review of War for the Planet of the Apes: Apes Strong. Together.

Companies You Can Trust: The 7 Best Board Game Publishers