Review of War for the Planet of the Apes: Apes Strong. Together. 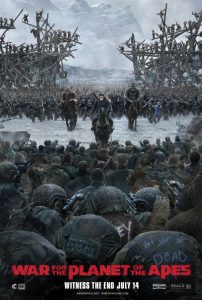 Planet of the Apes is a series that has long had a fancy of the science fiction loving community. The original series of movies made in the 1960s and 1970s are beloved, in part for the performances and in part for the strange twists that happened across series.

And, even before we reached the current trend of rebooting everything, there was a disastrous Tim Burton helmed Planet of the Apes in 2001, that was a hard to follow plot, and marred by a really poor attempt at twist ending. (The less that is said about Ape-braham Lincoln, the better.)

A decade later (2011) saw the film Rise of the Planet of the Apes where Rupert Wyatt directed a true origin story for the franchise, as a mutagen was introduced into some test apes as scientists were seeking a cure and help for Alzheimer’s. The side effect is that the apes were made smarter, led by Caesar, but the mutagen also triggered a simian virus that did catastrophic damage to the human population, while leaving the apes unharmed.

Set 10 years later, 2014’s Dawn of the Planet of the Apes follows Caesar, as he and the apes he leads must learn how to make peace with the small band of human survivors and each other. Eventually, this triggers a conflict and we see war come to the apes and humans, despite Caesar’s and some humans best efforts. The director of that film, Matt Reeves, also helmed the continuation of that story with this summer’s War for the Planet of the Apes, where the story of Caesar and his clan is continued. And it is an excellent piece of work and worth seeing in theaters.

War for the Planet of the Apes: Apes Strong. Together. 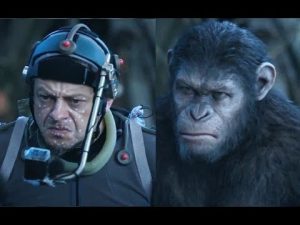 First, it will be a crime if Andy Serkis never wins an Oscar for his portrayal of Caesar because of the technology that is involved. Using motion capture, Serkis does (and has for all 3 films) brought Caesar to life, making one of the more compelling creatures of the last decade of film.

This trilogy of movies has largely been centered on Caesar and his development. It would be a discourteous move to saw that Caesar’s story is moving from ape to human, but we do see as his intellect grows, so does his emotional range. A large part of this movie is about what happens when Caesar’s rage is triggered by something that happens early in the film. We see him wrestle with how to be a leader without power at one point and how to further the cause of the apes, even at a cost to himself.

Second, though it is a bit heavy handed, Woody Harrelson serves as an excellent antagonist in the film. Leading a military unit against Caesar and his people, Harrelson and Caesar discover that their motivations extend from the same tree, rooted in anger and rage. Seeing the human and ape as foils to one another is a pretty compelling move by the director; that the audience is to fully buy in and support the cause of the apes is no small feat and it works wonderfully.

Third, they advance the story forward. A military heavy edition of the franchise by itself wouldn’t be to compelling. Yes, it is interesting seeing apes on horseback and using weapons, and exploring what happens when apes betray the other apes and work for the humans, but the most powerful part of the sequence is that the major plot moves forward. (Spoilers ahead if you are trying to avoid any information about the film!) The virus mutating and having even more effects on the human population is pretty compelling, especially in the light of the history of the franchise and where humans are at the start of the series. Additionally we get some nods to the series as well, as the apes are seeking to escape to the desert and Caesar’s son Cornelius is introduced.

Fourth, though this is a small part, it does help make the story: they use humor well. This movie is full of dark, haunting images of war and destruction, of wrecked lives and it would easily go into a deep, deep dark funk. But they introduce the new character Bad Ape, who is voiced by Steve Zahn and it is delightful. As an ape that can speak but that isn’t from the group that Caesar knows, it proves the virus has gone wider than originally thought and impacted more apes. The comedic moments that Zahn is able to bring to the table helps to really balance out the movie in a successful way.

When all’s said and done, it is going to be a hard case to argue that the Planet of the Apes franchise is not the most compelling trilogy of the 2010s. The careful craft of two directors has really taken what could be a tremendous effort in “ugh” (see Burton’s slocky ending) and instead crafted a smart, careful exercise that could potentially spin even more movies in the future. War for the Planet of the Apes is another in great run of successful summer blockbusters in 2017 and gets 8.5 out of 10 Nerds.

This board game review is on a Deadline!