Looking for some affordable unpainted miniatures? Here’s a look at the WizKids line!

By Chad Hughes On Jun 20, 2018 Last updated Jun 20, 2018
A look at some of the unpainted miniatures from Wizkids.
Share TwitterReddItPinterestFacebookEmailPrint

I recently got my hands on a few of the Nolzur’s Marvelous Miniatures and Deep Cuts line of unpainted miniatures from Wizkids. The two lines are direct counterparts to each other, just branded for D&D and Pathfinder respectively.

So are these miniatures worth bringing to your table?

They are all pre-primed, yet unpainted miniatures molded from a fairly hard plastic, presumably what allows them to be branded ‘High Definition’.

The overall quality of the miniatures is very good: the plastic is firm without being brittle, which keeps bits like arms and weapons that stick out from the main form from getting bent out of shape.

I did notice a few mold lines and other occasional stray bits of plastic left over, but nothing that wasn’t easily cleaned up with a sharp hobby knife. I would put the general level of detail a step or two above the Reaper Bones lines, but not as high as, say, something from Games Workshop or Anvil Industries, which is understandable, considering they cost a fraction of what a typical Games Workshop mini would cost.

The blister packs I received were:

For the miniatures I painted, I tried to stick to the idea that these are largely targeted towards the harried game master, and stuck with simple paint jobs that would look good on the table top.

The Wraith & Specter are two apparitions made of a translucent plastic with the specter appearing as an almost banshee-like figure with wild hair and screaming face, and the wraith is a helmed figure whose mouth is open in an eternal howl. Since I wanted to preserve the ghostly nature of the two figures, I painted them almost entirely with ink, saving the paint for the faces where it would pick out the detail.

Of the figures received, I am actually the least happy with these from a painting perspective. While the figures are listed as being pre-primed, I honestly could not tell, as the ink in particular seemed to simply slide off the plastic, requiring 6-8 coats before I got a color I was happy with.

The entirely translucent nature of the figures also means that for areas where you are trying to pick out the few fine details available, it’s actually difficult to see and this can lead to a slightly sloppy look as you put down paint without being certain it’s the right spot. That being said, the figures turned out well in the end, and I can’t wait to put them to use on the tabletop.

The Sorcerers are fairly similar, each showing a human male in the act of casting a spell.

One is obviously intended as a ‘wilder’ caster, with a fur loincloth and long dread locks, while the other is more urbane, with fine clothes and hair.

The ‘spell’ is represented by arcs of the same translucent plastic used for the ‘Wraith & Specter’, so keep that in mind when painting these figures.

These two figures and the ‘Dire Wolf’ from the Deep Cuts line are where the ‘High Definition’ portion shines, with the clothes and fur showing a nice amount of detail and the poses having a solidly dynamic look.

(More: How miniatures get made. Painting tips.) 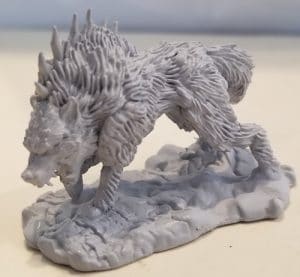 The Dire Wolf is probably my favorite figure of the group, and one I am going to be breaking my rule of doing a simple paint job to spend some extra time on.

It is a simple figure–a hulking wolf the size of a pony with a line of bone spikes running down its back–but the figure does an excellent job of showing the sheer menace of such a thing.

The figure is well detailed and while there are some minor molding issues they are easily fixed. One place where the figure does fall down is the paws, especially the back paws, which are basically undifferentiated blobs of plastic that seem to melt into the terrain underneath.

Pillars and Treasure Piles… Frankly I’m kind of disappointed in these two and largely for the same reasons.
The ‘Pillars’ is a set of four weathered and battered stone columns, suitable for a dungeon, temple ruins, etc.

While the miniature is of decent quality, there are some issues with the molding, with all four of the pieces having a significant mold line running the entire length of the piece, and several small lines around the top and base. Part of the issue with this is that if you clean the mold lines with a hobby knife, the plastic underneath is a much darker shade than the primer and makes for a jarring, eye-drawing contrast between the two. The mold lines around the bottom also mean that two of the four would not sit properly on a flat surface.

The Treasure Piles set consists of 3 piles of coins, bags, chests, and various other items (weapons, etc.) ranging in size from small to large. The molding on these is poor at best. While there are some minor mold lines around the edges and across the tops, the biggest issue is that they apparently forgot the ‘definition’ part of ‘High Definition.’

While the coins themselves are mostly good, the bags and items strewn through them tend to lack detail and blend into the surrounding mass to the point where I have no idea what some of the items are supposed to be. While it’s still obvious what the miniatures are supposed to be, they don’t live up to the standards set by the first three.

Overall both lines are a great value for the price, generally seem to paint up well (although I am not sure being pre-primed makes any real difference), and come in a wide variety for those hard to fill niches in your collection.

Here’s a link to the full line of unpainted miniatures from Wizkids. Most blister packs contain two sculpts (like the sorcerer above) and packs retail for around $4, making these miniatures some of the most affordable minis on the market.

[Disclosure: Wizkids provided Nerds on Earth with these miniatures in exchange for an honest review.]

A lifelong Tennessee native, Chad works in IT to fund the things he enjoys: roleplaying games, video games, and blacksmithing. He started sitting in on his older brother’s D&D session before he could read, and never looked back. Cast member and official miniature painter for the Called Shot Podcast.