The three Viking-themed games add up to a great board gaming saga.

Raiders of the North Seas is one of my favorite board games. I love the gameplay and I love the Viking theme. It’s a game that has generated great buzz and sees strong sales, but did you realize there is a whole North Seas saga that includes three base games, a slew of expansions, and a kit that bridges all of them together in a loose narrative?

1 Shipwrights of the North Sea

Shipwrights of the North Sea is set in the early years of the Viking Age and is the first of the North Sea board game trilogy, which makes sense. After all, Vikings have to build their boats before they can get out and pillage.

It is basically a card drafting game. Players must collect oak, wool, and iron, as well as getting other craftsmen on board to help build their ships, paying them in gold. As you would expect, the townsfolk are an array of characters that you must manage and keep on your side.

Full disclosure, this is the game of the saga that I haven’t played, although I’ve heard from others that you always use the included Townsfolk board if you really want to get the most enjoyment out of the game.

You can get Shipwrights of the North Sea here.

2 Explorers of the North Seas

After Vikings have built their ships, it’s time to do a little exploring, so enter Explorers of the North Sea, a great little “pick up and deliver” game. Explorers of the North Sea plays quickly and makes for a good introductory board game, while also having lots that more experienced players will enjoy as well. I enjoy it; my 9-year-old enjoys it.

Players have hex tiles that they lay down and they have a little longboat meeple that they slide around. As more tiles are laid down, there is more land and sea to explore. The objective is to gather resources into your boats and deliver them back to your settlement. The strategy comes in counting your moves, ensuring you have enough to safely deliver the goods.

Again, Explorers is a nice gateway game, but it’s a solid and thoughtful game as well. It also continues the same beautiful artwork that is seen throughout the entire North Sea Saga. The artist’s name is Mihajlo and he has a bright, cartoony style, while somehow simultaneously  grounding it with a grim and serious veneer, suitable for the Viking theme.

You can get Explorers of the North Sea here.

3 Raiders of the North Sea

Raiders of the North Sea rounds out the trilogy and is the best game overall in my opinion.

Raiders is a worker placement game where your Viking village is established. Now all you need to do is to go out and raid and plunder nearby settlements. But be careful, because you need to make sure you are properly resourced up before you embark on a raid.

I’ve done a full review of Raiders of the North Sea here, so I’ll point you there for more information.

You can get Raiders of the North Sea here. 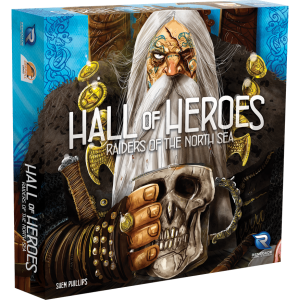 As I mentioned a few paragraphs up, there is also a slew of expansions for the three base games:

To close, there is a way to tie the three games of the North Sea Saga together: The North Sea Runesaga.

It is not a standalone game. Instead, The North Sea Runesaga to collect “runes” as they progress through the three games. While each rune will adds subtle flavor to the game that comes after it, Runesaga is not meant to wholly upend the games, instead it’s meant to bolster them and add flavor.

After all three games have been played, players add up the number of runes they’ve collected and the overall winner of the campaign is declared Chieftain. It’s another piece of flavor for an already wonderful trilogy.

I can’t recommend the North Sea series enough. Raiders of the North Sea is a must purchase for most gamers. And if you enjoy the Viking theme at all, it’s likely you’ll want to dive deeper into the North Sea Saga.

Board Game Review: Make Magnificent Maps with the Cartographers Map Packs by…

Board Game Review: Stack that City in Akropolis by Gigamic and Hachette!

Board Game Review: Get a Royal Welcome in Nidavellir by GRRRE Games and Hachette!