By Clave Jones On May 31, 2018 Last updated May 30, 2018
Photo courtesy of Geek & Sundry
Share TwitterReddItPinterestFacebookEmailPrint

If you want to see a certain type of D&D player twitch, ask them to roll a d20, yet don’t tell them which modifier to add to it. The conversation can go like this:

GM: Roll a d20.
Player: Do I use my Investigation skill or Intelligence modifier?
GM: Don’t worry about that for now. Just roll a d20 and tell me what you got.
Player: So it’s an Arcana check then? Or Wisdom maybe…Do I add my Insight modifier?
GM: Seriously, just a d20 is fine.
Player: But I need to know what to add….

And this goes on and on, the player oblivious to the fact that the GM is trying to move things along by improvising a skill check. As a result, the GM probably just lies to the player about a modifier to add simply to move the game along.

But every skill check doesn’t need to be as granular as getting the exact skill modifier correct. Sometimes a game needs to quickly and simply answer the question of, “Did it work or not?” Yet a lot of time is often spent in needless back and forth conversations fussing over a stat block!

So we have two quick and easy options for difficulty checks that will speed up play. 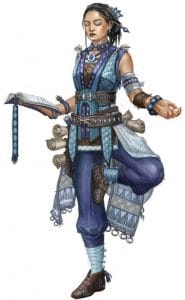 D&D 5e is a lot of rolling a die, adding a modifier, then comparing that number against a difficulty check (DC) number. In almost all player interactions with a NPC, the DC is all we really need to come up with. In other words:

That sort of thing.

And to come up with this DC, we really only need to determine how difficult a challenge it is.

Instead of even identifying a DC number, just ask the player to roll a d20. From the result, tell the player what happens. Someone who rolls really well may get something more than someone who just rolls in the middle. Maybe it’s a little extra information, or further compliance from the NPC.

Someone who rolls a 1 might bring some hilarity to the situation, like an NPC that simply stares at them.

Obviously, what the DM is doing here is taking away a straight success or failure via a DC, and ad libbing shades of grey, dependent on the d20 roll.

This is an arbitrary roll on which to base results, but it’s not entirely capricious. If someone rolls a 6 on the d20 but the DM knows they are competent in that area, it might mean a clumsy attempt that ultimately gets the job done. Players can feel empowered by their investment in a particular skills, so even on a bad roll a success can be accounted for in the role playing.

This “roll and tell me what you get” approach has no math involved at all, but it requires a bit more improvisation on the part of the DM.

Maybe you are a mathlete, so you want a little crunch. Do this: When a PC wants to interact with an NPC in some way that might be challenging, like diplomacy, lying, or threatening them into submission, we simply need to ask, “On a scale of 10 to 20, how difficult is this?” The answer to that question becomes our DC.

A particular NPC certainly has strengths and weaknesses in dealing with a PC. Maybe they are vain or simple, so they very easily succumb to flattery (DC 10). Maybe they are a thick-necked brute that is incredibly difficult to intimidate (DC 20).

This method isn’t perfect, but it allows a DM to easily create a DC for a variety of situations and for any NPC.

Honestly, I imagine most DMs will mix and match these systems dependent on whichever one is preferred at the moment. In some situations it would be preferable to let players know what the DC is for a particular check they’re going to make, while other times it might be preferable to role play without a particular DC number in mind.

The point is that it isn’t necessary to fully stat out that simple interaction, and certainly don’t let the game slow down because a player is leaning way too heavily into his character sheet, fishing for the perfect modifier. Good enough is often times good enough.

Editor’s Note: If you’d like to hear unmodified d20 rolls in action, you should check out the Sneak Attack! Podcast.  DM Reid does this with a noteworthy mastery.