You don't have to leverage a Skill or Weapon to use the d20.

By Michael Adkins On May 31, 2018 Last updated May 31, 2018
Share TwitterReddItPinterestFacebookEmailPrint

Ah, the d20. Easily the most leveraged die of the typical seven dice set we utilize in our favorite tabletop RPG. Whether we’re rolling for initiative, making an attack, performing a skill check, or attempting a saving throw, we’re constantly reaching for the d20. Most of us own several; if for no other reason than superstition or the desire to have a fallback option or ten if one of them fails us a little too often for our comfort.

Yet as often as I’ve played D&D, Pathfinder, and Starfinder, DM Reid (click that link for an interview with the man himself!) of the Sneak Attack! Podcast has shown me that I’ve not yet realized the d20’s full potential.

You see, we typically modify that die when we send it careening down a dice tower or tumbling across the table. But the more I listen to Reid at work, the more I’ve clued in on how often he calls for a straight up d20 roll to determine all manner of things. And that’s what I want to talk about today.

I’m admittedly way, way behind on Sneak Attack! Like…115 episodes behind. But the thing that keeps grabbing my attention – both as a DM and as a player – is how often Reid calls for a d20 roll for chance’s sake alone.

The d20 is already a major storytelling device.

But Reid turns the d20’s storytelling capabilities up to 11 by calling for it to be rolled at seemingly unexpected junctures.  And to emphasize its power over the narrative even more, he wants that die to determine outcomes regardless of your Ability Scores or Skills.

For instance, in one of the episodes I listened to recently, Akio was trying to transcribe a spell scroll. During the course of that tedious and exacting process, NPCs and PCs alike dropped in on his work – inadvertently bumping into him.  Reid called for an un-modified d20 roll to determine whether or not the interaction ruined Akio’s progress. At least once, Akio had to start over from the beginning.

I don’t believe I’d have ever called for a roll in this scenario, and if I had done so, it would undoubtedly have been a save (more than likely a Dex save). But this was another instance of Reid letting that d20 steer the narrative.

50/50 Leaves Plenty of Room for Surprise

Here’s what I love about Reid’s use of the d20: It keeps things randomized. Any modifiers applied to a d20 roll affect the probabilities – and usually in the player’s favor. And there is absolutely nothing wrong with that! The barrel-chested barbarian absolutely ought to have a greater chance at breaking down a door.  The nimble-fingered rogue should be more adept at picking a lock. 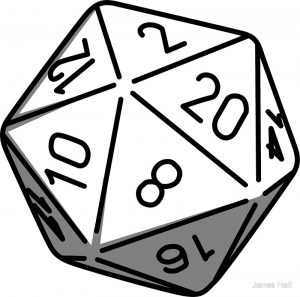 But we sometimes lose track of the fact that our skills and abilities don’t always and unfailingly affect the outcome of every circumstance we find ourselves in.

This is particularly important, I think, when it comes to decision-making. Let me explain.

If I’m the aforementioned barrel-chested barbarian, I’m always going to be predisposed to looking for solutions to problems that leverage my superior strength. This makes total sense…but it also pretty severely limits the pool of options at my disposal. Not actually (there’s always an extremely high number of options in any given scenario), but practically (as I will be primed to think about Strength-based solutions).

And that’s part of the glory of Reid’s use of the d20: Even at 50/50 odds (1-10 fail, 11-20 success), there’s plenty of room for surprise both behind the screen and in front of it. There are times Reid has let the die speak only to breathe a heavy sigh of resignation at the result as the PC gets their way as we, the listeners, pump our fists in celebration. There are also times when the die rolls the other way and you can literally hear the smile on Reid’s face as he outlines the now determined fate of one of his PCs and we, the listeners, laugh out loud at the odd turn of events (like Akio having to start from scratch).

If every roll of the die was completely and truly random, there would be no fun or feeling of power and ability within our RPGs. But to swing the complete opposite direction is also a bit of a handicap!  In the very least, calling for unmodified d20 rolls in any given situation might open the floor to debate. In the case of Akio copying the scroll, he might have asked for a Dex Save and gotten it…only to still have failed since his Dex Save is no guarantee.  And Reid probably would have allowed it given a strong enough case.

But the case in point stands that Reid calls for more unmodified d20 rolls than any other DM I’ve ever listened to or played with, and I dig it.  The practice

I think that is a genius way of introducing the unexpected to the narrative without it feeling like the DM is making a power play against the PCs.  No one wants that, and the d20 can ensure just that.

To close:  If you’re not listening to Sneak Attack!, you’re missing out on a great story helmed by a DM who isn’t afraid of letting the dice do the talking.  Reid is operating on a whole ‘nother level when it comes to d20 utilization and I’m over here taking notes.  Join me.

Editor’s Note:  If you’d like a little more direction, here is an excellent post about improvising DCs for skill checks!

Euphoria: This board game might not be your first option, but it will always be a good option.