By Clave Jones On Jun 29, 2017 Last updated May 17, 2018
Share TwitterReddItPinterestFacebookEmailPrint

The purpose of this article is to convince you to give the Sneak Attack Podcast a chance to live in your ears. But the first thing I plan to do is criticize the first couple episodes of the podcast. That sounds like an odd strategy, huh?

First things first, the Sneak Attack Podcast is a “live play” podcast. The DM (dungeon master), Reid, runs four players through a D&D 5e campaign that is set in Brannis, a world he imagined and designed himself. They record their play and push it to iTunes, so us nerds have another fantasy world to lose ourselves in.

The four players eschew their real-world names and instead go by their character names. There is Brenna the bard, Greaek the fighting’ dwarf, Sherwood the gnome druid, and Akio the noodle-cooking wizard with a chicken on his back. 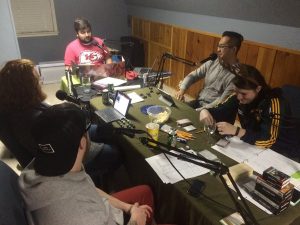 As I type this, there are are over 100 episodes of the Sneak Attack Podcast, not including a few behind-the-scenes and mailbag episodes. This review covers up through about episode 25 and I’ll take care not to spoil story points, as I really do want to grab you by the shoulders, look into your eyes, and beg you to listen to Sneak Attack.

The funny thing is that, at first, I couldn’t bring myself to listen to it. I have very limited time for podcasts, so my general rule is if it doesn’t hook my ears by 15 minutes into the first episode, then I’m out. Sneak Attack didn’t hook me. In fact, the first episode kind of bugged me a little bit.

From the very first episode it was clear that the dwarf was the energetic catalyst of the group. Rather than dither over a decision like ‘Should we open this door or not?’, the dwarf wasted no time in saying, ‘I kick down the door!” From the first minute of episode 1, he was ready to play some D&D!

Oddly, the other three players typically spent their turns slowing the narrative down by endlessly knocking every suggestion the dwarf had. Rather than follow the Improv 101 principle of “yes, and…”, they would bust the dwarf’s chops at every stop.

So narratively speaking, not much happened in the first few episodes. Sure, the characters were introduced and some fights were had, but a lot of time was spent bantering over mundane things and a general sense that if the dwarf wanted to go right, then the rest of the party would go left, if just to tease him.

Given that, why should you listen to Sneak Attack? Friends, let me tell you. 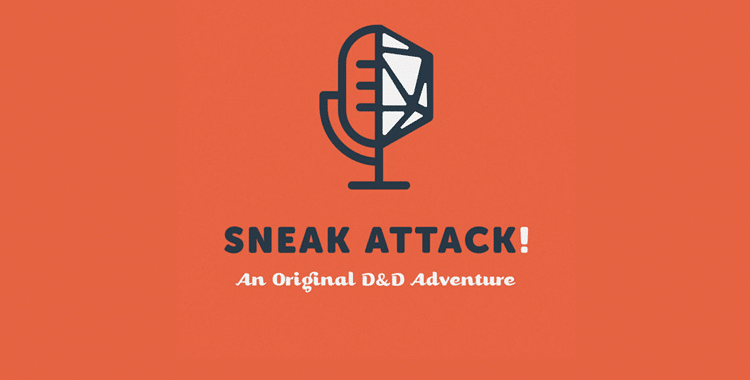 It’s human to be spazzed up the first few episodes. One player in particular could not let any opportunity pass to make a comment, necessary or not. Sounds annoyingly verbal, huh? Listen, it’s only human to be a little anxious and Mountain Dewed up when you are recording something for the very first time. It’s normal and something so many of us can relate to.

“Normal” and “human” are actually two words that I’d use as a compliment towards Sneak Attack. The feel around the table is that it is a group of genuine friends playing. These aren’t actors mugging for the camera and it makes the whole podcast very relatable, down-to-earth, and good natured. 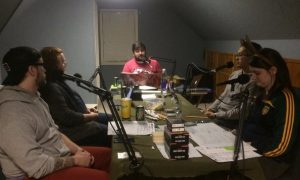 It ramps up quickly. Sure, it’s more banter and giggling than story in the first few episodes, but it grabs its footing really quickly. The world begins to unfold, NPCs are introduced, and Reid–the DM–introduces some adventurous quests for the party. The dwarf, of course, is eager to get at them.

Within just a few episodes, us listeners are drawn in. And those periods like when the party is giving the dwarf grief when he can’t pay his tavern bill moves from feeling like an annoyance that slows down the narrative into charming and annoying moment that feel someone lovingly teasing their younger brother or something.

Then episode by episode the layers of the onion are peeled back. The fun times and giggling continue, but that quickly sits alongside some really engaging story moments, after only a few episodes.

The cast hit their groove. I’ve mentioned that the dwarf came ready to bust out of the gate. The bard played his foil, always bantering and “shushing” him, yet laughing with him at every turn as well. The wizard and druid certainly pick their moments to come alive, but are ultimately the quietest of the party.

The podcast basically progresses in this same pattern, each of the four of them individually hitting a nice stride really quickly. Also, none of them were min/maxers who designed a character for maximum efficiency. Each of them realize that D&D is a game and games are meant to be fun.

So if the wizard, for example, thinks it sounds fun to ride a boar, then that’s what he’ll try to do by golly. In fact, the druid and wizard often come up with the zaniest and most imaginative solutions to problems. They’ll make choices that get them into a pickle, but they creatively get themselves out almost as quickly. And Reid does a bang up job of rolling with it, which makes for a heck of a fun story.

Reid is good as a DM. He serves as a fair adjudicator, but he also tries to get out of the way as much as possible. Meanwhile, the world of Brannis that he built is well though out and evocative. (Is it spelled Brannis? IDK, but that’s how it sounds on the pod.) If Sneak Attack doesn’t soon launch a Godsfall-type Kickstarter in order to publish Reid’s world building, then it will be a missed opportunity. 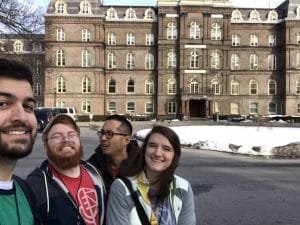 Sneak Attack is good. And by good, I certainly mean that for all the reasons above. It has a nice table vibe, it finds its legs quickly, the party plays their parts well, and Reid is a fantastic DM. In addition to those I could mention that the audio quality is really good and the overall production is great.

But what I mean by ‘good’ is that the people of Sneak Attack are good people, and I can say this confidently without ever having met them. Sure, they tease, but it’s never snarky or mean, and it’s never crude. They never laugh at others, they laugh with each other. A frustration never elicits a rage quit. Etcetera.

I feel like the Sneak Attack! Podcast is the last pure place on the internet. It is wholly without cynicism. And the character of the players holds a double meaning. Sure, they are characters in that they play druids and bards. But it is clear also that they have character.

The Sneak Attack Podcast is a rare slice of the internet where everything’s not terrible all of the time. Where is the ironic detachment? The random cruelty? Why are the players nice to one another? None of it makes sense.

Listen, I don’t want to make this weird, but I want to friends with these folks. They are lovable goofs. If they are ever in the Minneapolis area, I hope they hit me up so I can buy them a burger, just to hang out with them.

We all need good people in our lives, especially those with unfailing positively. We’re all sick of the jerky jackwagons that seem to have crawled out of every shadowy corner of the internet, so the Sneak Attack Podcast is absolutely a breath of fresh air. I feel good after listening to it, and that alone is worth the investment.

Plus, they play some sweet D&D.

You can find the Sneak Attack podcast here.

Stepping Up as a Gamemaster: Kobold Guide to Gamemastering

Secret Wars: A Review of Eberron: Rising from the Last War…