By Michael Adkins On Jul 19, 2015 Last updated May 25, 2018
Share TwitterReddItPinterestFacebookEmailPrint

Promising on the cover to survey “half-baked heroes from comic book history,” Jon Morris’ The League of Regrettable Superheroes introduces readers to over one hundred characters “who walked away from their comic book careers without so much as a participation ribbon to show for it” (pg 9).

Morris does go on to explain in his introduction that “not a single character in this book…doesn’t have at least the potential to be great” (pg 9, emphasis his) and that “several members [of the book] have been revived, reintroduced, or otherwise regifted with a new lease on life” (pg 9).

Spanning the Golden, Silver, and Modern Ages as well as dozens of creators and publishers, Morris’ collection is quite the rogues gallery of comic infamy.  Many of the characters made only a single appearance, while others faired slightly better as far as longevity is concerned but still disappeared into obscurity.  Reading through each entry brings these long lost characters back into a life of their own.

Since we here at Nerds on Earth are big fans of Lists of 7, I thought I would present my favorite entries in that style and wrap the post up with comments on presentation and style.

Review of The League of Regrettable Superheroes

1. Bozo The Iron Man.  Twenty-four years before Marvel introduced readers to Tony Stark, Quality Comics had a 40+ issue run starring an Iron Man of their own.  Capable of all of the feats you’d imagine for a robot, Bozo was a menace turned do-gooder by way of the hacking skills of one Hugh Hazzard.  Hazzard then controls Bozo remotely, by wearing him like a suit of armor a la our contemporary Iron Man, or even (and you can’t make this up, folks) by riding him piggy-back.

My favorite part of Bozo’s biography: He met his end at the hands of a group of neighborhood kids leading a scrap metal drive to raise money for war bonds.  He is pictured swinging sharks around like baseball bats and even snatching missiles out of the air…but he’s recycled by a bunch of patriotic pre-pubescents.

2. Dynamite Thor.  This hero was immune to explosive detonations, so he strapped a bunch to his
person and entered the fray as a hero.  Morris outlines Dynamite’s highly irregular and highly dangerous method of transportation: “One stick of dynamite would launch him skyward; he’d ignite another to change direction and then fire off a chain of them to travel aerodynamically” (pg 45).

The best bit of information Morris provides, though, is that the guy is still somehow susceptible to the likes of gunfire and blunt force trauma.  Go figure.

3. B’wana Beast.  According to Morris the Beast “has the singular ability to combine any two
animals into a single creature embodying the properties of both…and afterwards return the animals to their regular forms, unharmed” (pg 134).  This is a pretty cool power that should have proven much more fertile ground than his two issues suggest.

4. Dial H for Hero.  A very cool concept!  Robby Reed would dial H-E-R-O into a phone and find himself “transformed – not just into a single hero, but into a succession of superheroes…as many as three unique and never-before-seen…each with distinct names, power, and costumes” (pg 145).  Definitely a high demand kind of concept placing a tremendous creative burden on the writers, but they also accepted reader submissions for the transformation which is pretty darn cool.

5. Spyman.  This guy’s left hand is replaced by a cybernetic “Electro Robot Hand” (pg 185) after he (Johnny Chance) disarms a nuclear bomb.  I’m including him in my Top 7 List because “if one of the Electro Robot Hand’s built-in fingers doesn’t do the trick, he can swap in a new one.”  We Nerds have pondered about what might be found in the pouches of some of our favorite heroes, and this guy’s pouch contents take the cake: Spare fingers. 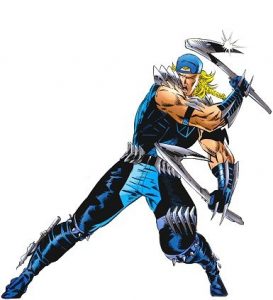 am almost 100% sure Jason and/or Clave will give me lip for saying so): I actually think his power is intriguing and somewhat justifies his overdone Shredder cosplay…but NOT the mullet or soul patch.

Adam X could “ignite the blood from any open wound on mental command, literally causing his opponent’s blood to boil” (pg 195).  That makes this one scary dude.  Can you imagine spending a battle consumed by the fear that if you get so much as a paper cut this guy could set your blood a’boiling?  Yikes. 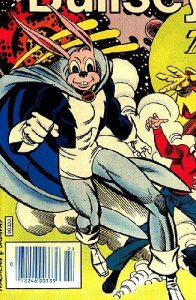 7. Thunderbunny.  In a previous book review (The Physics of Superheroes by James Kakalios), I pondered what it might be like to have a super power of my own.  After having read Thunderbunny’s entry, my new question is, “To what lengths would I go…what would I be willing to subject myself to…for superpowers?”  Bobby Caswell gains “tremendous strength, is invulnerable to harm, and can move and fly with the speed of lightning” (pg 251).  But he has to transform into the being pictured on the right to do so!  Worth it?

The League of Regrettable Superheroes is a well compiled, well presented historical highlight reel for the (mostly) highlight-less.  Each entry runs at least two full pages; one of those pages containing a brief biography for the hero or heroine, and the other showcasing reproduced covers and even full-page panels of their bygone exploits.

A relatively quick and entertaining read (benefitting from Morris’ humor and style), the collection can be bought on Amazon.

For more on the book, check out this interview Comics Alliance conducted with Morris!