Us Earth Nerds feel that it’s time we reclaimed the phrase “nerd alert.”  For far too long, its been used to ostracize people who spoke of dragons, played turn-based card games, and debated the superior captain of the USS Enterprise.

Instead of pointing the finger at the person, we want to point the finger at certain noteworthy objects of desire for the nerd populace.  We want to alert our fellow nerds to good things, especially if thy will prove to be new to you.  These posts will be our attempts at pointing you towards some of the hidden, new, or downright awesome items in the loot crate that is nerd culture.

The Physics of Superheroes

I don’t know about you, but I read comics in part because of the escape from reality they provide me.  As I turn the pages, I’m exposed to fantastic, unbelievable, and even enviable powers and abilities from heroes and heroins alike.

To be completely honest: I still haven’t stopped imagining what it would be like to heal like Wolverine, fly like Superman, or lift like the Hulk.  But the superpowers of the comic world are beyond my grasp.  They lie too far outside the realm of reality to put my hopes in…right?

Author and physicist James Kakalios’s The Physics of Superheroes says, “You might be surprised.”  While Kakalios never promises that I can have a superpower to call my own, he does argue that the comics gets their physics right more often than they do wrong – granting at least one “miracle exception.”

It is that miracle exception that precludes me and you from wearing our underwear on the outside, slapping on a belt with a thousand pouches, and standing up for (or fighting against) justice with a ballin’ codename of our own.

Technically speaking:  You could actually do all of those things, only without powers.  But should you decide to go that route, I think you’ll find your uniform will become a straight jacket and your base of operations a padded room! 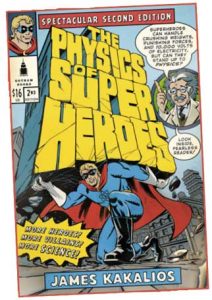 The Physics of Superheroes might be the nerdiest thing I’ve ever read, and I’ve read Thirty Years of Adventure: A Celebration of Dungeons and Dragons and even Stephen Hawking’s A Brief History of Time.  It is a wonderful combination of science and science-fiction – juxtaposing quantum physics with Kitty Pryde’s phasing ability, and mechanical forces with Gwen Stacey’s death.

James Kakalios promises in his introduction that the math will be kept at the algebra level so that readers can more easily track with his logic and the processes explored.  He delivers on that promise even through the quantum physics section, and he couples many of the concepts with simple, concrete metaphors for illustration’s sake and ease of understanding.

He starts the book with the study of Superman’s ability to leap a tall building in a single bound.  Kakalios asks How much force would Superman need to act upon the earth through his feet to propel him over a forty-story building given the opposing forces of gravity?  He then takes that answer and is able to lead the reader to the logical conclusion that Superman’s home world, Krypton, as a matter of physics fact, would indeed have exploded given its physical makeup.

Trust me:  You’ll totally track with his thought processes and the physics that steers them from Superman’s leaping ability to Kypton’s inevitable doom.  That’s the beauty of this book!  You’re constantly exposed to textbook material from several fields of physics all framed by actual panels from comics starring characters you love…and it’s simple.

Can I be Kitty Pryde?

My favorite material actually came from the “Modern Physics” section which deals with the dauntingly named quantum physics.  Kakalios’ exploration of infinite worlds is absolutely fascinating, and left me with the sense that the multiple world/universe tactics of both Marvel and DC may not be a simple literary device after all. 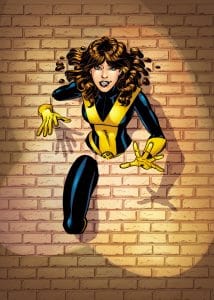 Kakalios does suggest there is one power all of us do actually have!  Well, sort of…In his discussion of Kitty Pryde’s phasing abilities, he points out that we all have what is called a “matter-wave,” and it does, in fact, have a tiny, tiny chance to phase through a solid object.  Kitty’s ability is actually better understood as one that enables her to increase her probability of that phasing (called “tunneling”) to nearly 100%.  He writes:

“…if you were to run toward the concrete wall, there is a very, very small probability that your matter-wave will arrive on the other side of the wall.  The greater your kinetic energy, the larger your chance of tunneling.  Those who doubt that this is indeed possible are invited to begin throwing themselves at concrete walls right now, and to persevere in their attempts no matter how discouraging the initial results.” (pg 252)

Heroes and villains are explored alike and run through the physics crucible with surprising results.  Some fail laughably, while others pass with eyebrow-raising colors.  I don’t want to spoil them all here, so I highly recommend you pick up the book and see for yourself!