Here at Nerds on Earth clearly love all things nerd (OK, most things). And most the time, we are going to take a deep dive into the things like “What group makes the best Avengers team?” and the like.  Obviously, the vast majority of comic books and graphic novels live in that realm.

But the story format of comic books is often overlooked for what it can be great at: Telling stories.  At its core, comics is about tellings serial stories.  With that in mind, I want to lift up a series of graphic novels that tell an important story that is a part of our history and that is especially poignant now: The March series of graphic novels by Andrew Aydin, illustrated by Nate Powell and telling the story of Representative John Lewis.

Representative John Lewis is now representing the state of Georgia in the House of Representatives, but the story being told in the March trilogy (the first two books have been released) is about what how Lewis grew up in the American south during the era of the civil rights movement.  The first book tells the story of how Lewis worked hard to be educated, eventually becoming a student in Nashville, TN, during the iconic lunch counter sit-ins. 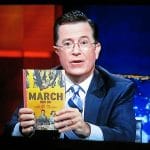 As someone who grew up in the south, I have an understanding of the history, but these books make it come alive in a real way, telling the history that one man witnessed up-close.  It does it through a series of flashbacks, as Rep. Lewis is telling his story to two children, present in Washington, DC, on the day of President Obama’s first inauguration.

I couldn’t recommend this series more.  It is sadly relevant as we see issues of race and division surface in our society again.  Regardless of your politics, hearing the history from a firsthand eyewitness is an amazing opportunity and this book has rightly ended up on many “Best Of” list for young adults, not just as a graphic novel but as a book outright, which is nice to see.

Plus, if you have seen the movie Selma, it includes the story of Lewis and his work in trying to get African Americans registered to vote in Selma, Alabama, and what happens with Dr. Martin Luther King, Jr. gets involved.  I was delighted to see that focus in the film, especially having read more about Lewis in March beforehand. 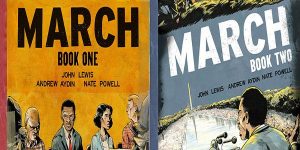 I recommend this for all nerds, especially so we can share a part of our history with our young people.  The first two volumes of the trilogy are available in hard copies and digitally, with the first collection available on the Amazon Kindle format for a mere 1.99.