Occasionally, we here at Nerds on Earth HQ like to point out things that we worry most of us may have missed. These Nerd Alert posts are designed to help you discover things that might have gotten lost in the shuffle of the massive amounts of pop culture out there in the world. 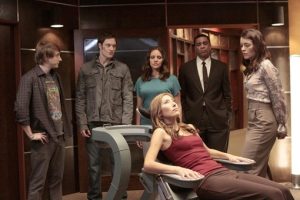 Dollhouse is built around this simple premise: a company has created a technology that allows them to essentially mind wipe individuals, implanting memories and skills that are then used to satisfy clients who pay massive amounts of money to for jobs. The show follows one such “Doll” based out of an LA “House”: Echo, portrayed by Elisha Dushku.

Why check out Dollhouse?

So if you have never checked out Dollhouse, I recommend it. It is admittedly a slower start than you would hope with a great television show but it pays off if you can hang in there. It has the sci-fi high concept put into practical terms and poses some ethical dilemmas about technology that are interesting to explore in a fictional universe. I can’t recommend it enough!