There are characters you should know in the world of comics that sometimes get lost and forgotten, sometimes even by the companies that own them. So today, we want to turn our attention to a comic book character team you should know: Power Pack.

[divider] Who is Power Pack? [/divider] 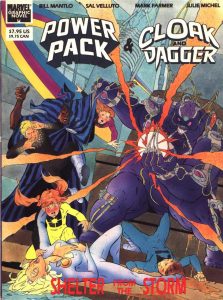 Power Pack is based on a simple premise: what would happen if you gave a family of siblings superpowers? In 1984 Louise Simonson and artist June Brigman launched the Power Pack series in the midst of a what was a renaissance for teenaged superheroes, alongside other series like New Mutants and Cloak and Dagger.

The Powers family got their powers from a member of the Kymellian race of aliens, “Whitey” Whitemane, who was attempting to stop an antimatter experiment by the scientist father. When he was mortally wounded, he passed along a superpower to each of the children:

The series proved to be a hit for a long time, in part because it was a great book to crossover into other titles to gain exposure. There were several tie-ins with the Chris Claremont era X-Men and New Mutant books, as well as other characters like Spider-Man.

The strength of the series was showing what it would be like for real kids to have powers and have to keep them under wraps, yet still want to be superheroes. You see them have to take punishment from older kids, when they could use their powers to easily defeat them. The characters are all given unique and distinctive personalities and it shows in how they deal with their situation. The eldest Alex very much falls in the line of “With great power comes great responsibility” while younger brother Jack is wants to be a swashbuckling hero.

One thing that the series did that I loved is occasionally the powers would be reset, with each Powers kid swapping out one of the original superpowers with another. It created some interesting dynamics that allowed different characters to explore different ways to use the powers differently.

[divider] Who is Power Pack and where can I find them? [/divider]

The series ran for several years before being cancelled in 1991. There is clearly a fanbase for the characters among creators, as you still see the characters pop-up from time to time, most notably Alex was on the New Warriors briefly and Julie was shown in Runaways and Avengers Academy.

I can’t recommend this series enough if you are trying to pass on comics to a child. It is a great series because it feels authentic to what kids would be like. Also, the series deserves praise because for nearly all the run, artistically, the characters look like children. You’d be amazed at how often comic book artists struggle, making children look like miniature adults. There are several trade paperback editions of the series available via Amazon and some of the issues are available on the Marvel Unlimited app.

Finally, there was an attempt at a Powers Pack television series. Pieces of it are available on Youtube and other places. It isn’t great. What has astonished me is that Marvel hasn’t ever realized that this property would be a phemonenal animated series. With the partnership Marvel and Disney now have, this is a team that needs to be revisited and put more front and center in their line-up of properties!

Nerd Nostalgia: Looking Back at ZORK without being eaten by a Grue