By Jason Sansbury On Oct 24, 2015 Last updated May 29, 2018
Share TwitterReddItPinterestFacebookEmailPrint

Have you ever had your favorite television show cancelled?

As a nerd, I have lived through it all. Some of the cancellations in retrospect weren’t such a big deal. (I still miss you, Alf!) But some were severe miscarriages of justice. (Can’t stop the signal, Firefly!) But let’s be honest, television is an expensive medium to tell stories and sometimes the things we love can’t survive there. So what is a creator to do?

Moving from Television to Comics 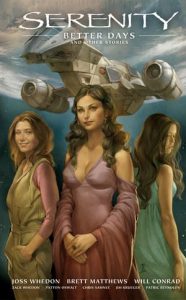 When you have an audience that loves a world you have made as a creator and wants to see more stories, comics is a great medium to carry those stories forward:

Thankfully, there are some great examples of creators that have taken this approach and were able to carry their show to completion.

Joss Whedon and the show runners of several Whedonverse properties have been able to continue stories. It isn’t a surprise that Whedon would turn to comics. He himself is the creator of an extraordinary run of Astonishing X-men, which in large part gave him his role in the Marvel cinematic universe. And Team Whedon has used the medium well.

Buffy the Vampire Slayer.  When the time came for Buffy the television show to come to an end, it isn’t surprising that it lived on in comics. For years, people had been using comics to tell side stories in the Buffy universe. But when the time came, comics picked up the ball and continued the story. Buffy season 8 may never exist on our television screens, but they do exist in comics. If you want to see the story continue, as Buffy trains an army of slayers, Season 8 is a great way to continue a story you love.  And the story there continues into seasons 9 and season 10. All are great storytelling, continue the tone of the show and advance the characters in some pretty amazing ways. 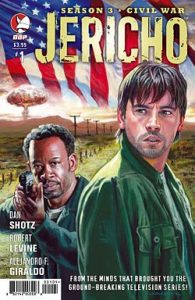 Firefly/Serenity. We still hate you, Fox network executives. But thankfully, because of comics, we get some more Firefly stories!  Whedon and clan partnered together to tell some of the stories that they had in mind but didn’t get to tell in the short lived television series and movie. Here are some of the stories you can read:

Those Left Behind tells a story that falls between the end of the television show and the start of the movie.

Better Days is likewise another story arc, falling in the same world but less clear about when it happens exactly.

The Shepherd’s Tale opens up the history and story of the wandering monk, Shepherd Book, whose seems a bit too comfortable with guns to really be a monk and a monk alone.

Leaves on the Wind picks up the story from the end of the movie and continues it. I was skeptical but wound up really loving the story as it continued forward.

Another example of a rabid fan base seeing a show continue comes in the story of Jericho. The show was famously nearly cancelled before fans inundated the network with nuts, based on this story and clip. It bought the show a second season but not a completion of the story. I recently discovered that the story was continued forward in Season 3 and Season 4. Both are sitting in my stack as I liked the show and was sad to see it end!

Comics is an obvious medium to continue stories that have their start somewhere else. Most properties will bring a fanbase with them, allowing the creator to continue or finish a story, while not needing to carry the weight of network expectations or the costs of producing live action television. If you love stories, it is a great way to carry forward!

What shows do you wish would carry forward in comic forms after cancellation?