The synopsis of She Who Watches by Anthony Pryor reads:

An ordinary man confronts an extraordinary evil.  A madman’s disturbing question, a string of savage murders, the legacy of an ancient goddess and an evil being seeking to return to our world — all are pieces of a puzzle that investigative reporter Alex St. John must solve to thwart the plans of a murderous cult and its demonic god.

I didn’t find this summary particularly intriguing nor had I heard of Pryor before, but a quick internet search revealed that he had worked on stories for both Dungeons and Dragons and Pathfinder. That increased the appeal to me. Anthony Pryor has experience and credentials; neither of which are necessary ingredients for a stand-out book, but they don’t hurt!
So I powered up my Kindle that evening and suddenly found myself at 33% completion without realizing where the time had gone.  She Who Watches had my full attention by the end of chapter one and held onto it tightly through the Epilogue.

Review of She Who Watches by Anthony Pryor 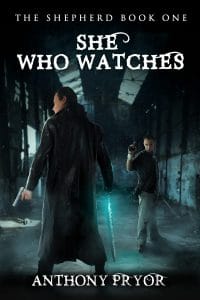 She Who Watches is at its heart a “chosen one” narrative, but with some very interesting and well-choreographed twists. Alex is a strict empiricist and so remains a staunch skeptic of the paranormal explanations for the goings-on, even after some rather convincing encounters. Eventually he experiences some pretty severe cognitive dissonance:

“God – something was happening – something substantial and empirical.  Something real. Something I could’t explain.  And that last thing was the most frightening thing of all.”

Alex remains skeptical for a majority of the book; looking for rational explanations that don’t involve demons and goddesses. This was a fantastic move by Pryor in my opinion! The book can hardly be considered science fiction or fantasy until you’re midway through or better because of the narrative’s point of view (Alex). I really dug that.  You aren’t thrown into the realm of the supernatural. You are slowly folded into it – much like Alex himself.

In addition to his default skepticism, which I think provides some fantastic conflict (both intra- and interpersonal) and depth, Alex is also an unwilling chosen one. He just doesn’t believe he fits the hero archetype, and as the book progresses and more of his backstory is brought to light you get that sense, too. But the reasoning behind his selection is thought-provoking and I welcomed it as a deviation from the norm. It’s noble, but in a weird, human way, not in the usual exemplar way.

The book is split into three parts with each successive section building from but also expanding the scale of the preceding.  The incremental increase of scale makes it feel very much like an RPG module: Goons populate the spaces between boss-like encounters that escalate, culminating in a final big-bad showdown.

Alex is charged with serving as the world’s Nomeus, or Shepherd. Now that his eyes have opened, he realizes that its not the world around him that has changed so much as it is that he has changed. Will he take up the mantle of The Shepherd and “stand in the doorway with a candle, holding the darkness at bay,” or will he persist in his denial of all things supernatural and leave that stuff to the so-called professionals?

She Who Watches: Final Thoughts

She Who Watches is the first of what is promised to become a trilogy. It serves as a remarkably strong start, too!  I hope Pryor manages to provide the depth of character and circumstance that he engineered in this book in the two that will follow.  My only concern is that the biggest hook for me in She Who Watches – the dissonance and tension of Alex’s empiricism and the unfolding world of the supernatural – is a device that is over and done with.

Alex seems comfortable with and accepting of his new station and all that comes with it at the end of the book.  The dissonance was hands down the most intriguing piece of the puzzle that is this book, but that is not to say that Pryor didn’t deliver across the board. He absolutely did.

I definitely recommend She Who Watches.  It’s flat out good story telling, period.  You can preorder it for your Kindle ($5.99) or in paperback ($16.95) today!