By Jason Sansbury On Mar 15, 2016 Last updated May 24, 2018
Share TwitterReddItPinterestFacebookEmailPrint

Who wins the comic book fight between Captain America and Cyclops?

Who wins it? Captain America vs. Cyclops

Scott Summers is running. The chill of the New York winter strikes his lungs and he tries to count the number of times that a man old enough to be his grandfather has come knocking at his door, wanting to “talk.” It is funny how many times Steve Rogers wants to “talk” and it ends with him throwing that shield, landing a punch.

Only this time, it is just them. No sides. No mutant versus human. No Avenger versus X-man. It is just the two of them…

The chill catches in Steve Roger’s lungs and he thinks “It is too cold for these old bones and I just wanted to talk.” Yet, here he is again, chasing down Scott Summers across Xavier’s Estate. Again. Another conflict that will have to be settled with fists instead of words; it feels like he has been doing this for way too long. And maybe that is why he was too slow to see the ruby red inbound light until just before it hit him. 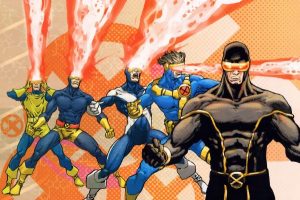 Scott is stunned at Cap’s reflexes. He was certain he had placed that shot perfectly, in a way that would catch him off guard. That was going to be his only sneak attack. Now, it was going to be face to face. But he feels okay about it. He has the high ground…

“Use the shield, Steve.” Is what is going through Captain America’s mind as he starts up the hill, now certain about where Cyclops is. He has faced his blasts before but he knows he can’t take too many shots from Cyclops directly before he will be done for. He needs to end this quickly.

Scott fires off two more attacks that Captain America deflects with his shield, never slowing down. Soon the fight will be in close and Scott knows that in close, he won’t last long with Captain America. His best chance is to do something unexpected…

Steve thought the next shot came in a weird angle and he didn’t realize why until he deflected the blast. And he didn’t follow where it went until the small tree it hit was nearly on top of him. How did Summers do that?

Scott smiles; no one ever thinks about the geometry of what he does, the precise way that he can fire a shot. He knew exactly where to put that shot so the shield would bounce it and now Captain America is slowed again, digging his way out of the tree limbs. Maybe the best move is to do something else that throws him off guard…

As Rogers climbs out from the last limb, he is stunned by a blast from very close. It winds him and, worst of all the shield starts rolling down hill. Now this fight is in close and Captain America knows that he can’t take too many of those blasts.

Scott sees the shield and decides the best move is to move it even further away. One quick blast and it is 10 yards further down the hill with Captain America is scrambling after it. And with each step Captain America gets closer, Scott takes careful aim and…

When the shot hits the shield, Steve thought for a brief moment that Summers missed and then he realizes that the shot was meant to go right off the nearby shield and into his ribs. And it was perfect. He lost his footing, falls, thinking that the concussive force likely cracked his ribs. He is finding it hard to breathe. But he keeps moving. “If I can just get to the shield.”

Scott is stunned that he got up from that ricochet shot. The angle he was running and the placement of the shield meant that when he opened up his visor, it hit Rogers square in the ribs, with all the force he could muster. And it seems like he barely slowed him down! 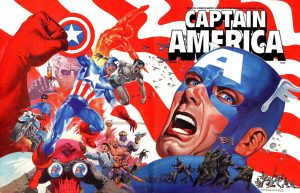 That brief pause meant Rogers had just enough time to make it to the shield, so that when the next blast hit, he was safely behind it. A couple more volleys and ricochets meant that these two leaders are at a standstill. They are both battlefield tacticians, capable of turning a battle with a command. Steve thinks “Clint could make this shot.” Summers thinks “Logan could charge him and take him down.” But it is just the two of them…

Steve knows what it will take. It is going to hurt but it might work…

When Cyclops see Rogers throw the shield, he knows the throw isn’t at him directly. Rogers wants to bounce it off that boulder and then the tree so it the shield will hit him in the back of the head. It really is some pretty good geometry. So he adjusts his shot and blows up the boulder just before the shield gets there, sending chunks flying and the shield landing right there; the angles were suddenly all wrong and Roger’s shot wouldn’t bounce like it was supposed to.

But even so, he is surprised at how quickly Rogers adjusts and is there to pick up his shield once again.

As he deflects another of Cyclops’s blasts , Rogers thinks, “That was step one, old man. Do you really think the rest will work?” He winds up and throws the shield one more time.

Again, Scott is impressed with the throw, but it seems odd that Rogers would try the same bounce trick again. And that is when the rock hits him in the face and shatters his visor.

Rogers doesn’t worry about retrieving the shield immediately. He knows that this means Cyclops has lost the ability to focus and control his blasts. Sure, the blasts will go everywhere but it is gamble he is willing to take.
Scott opens his eyes, to see and to attack. Neither go well. He catches Rogers out of the corner of his peripheral vision, just as he is punched in the head and then the side. He is winded and when Rogers lands the kick, Summers knows it is over.

Rogers says to Summers quietly, “I used to be pretty good at stickball in the alleys of New York kid. Even before the powers.”

Scott says “End Danger Room sequence. Prepare to run it again. I will be right back after I get some more goggles. And this time, I am bringing a spare…”

This was our most lopsided fan vote thus far! Captain America ran away with it. But it’s clear that Cyclops is a brilliant tactician and no slouch, willing to train endlessly to learn from his mistakes.