After last week’s episode, will the storytelling rebound or will it close in and continue a downward slide? We recap and review The Walking Dead episode 613: The Same Boat

The episode begins with Maggie and Carol being captured. In the midst of the capture, they wound the lone man in the Savior group. After discussing a trade with Rick, they take Maggie and Carol to a new location, using the walkie talkie along the way to communicate with others in their group. Viewers learn the Saviors have it all together by listening in on the sophisticated code words the Saviors use to communicate. 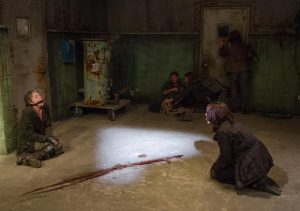 Carol starts to hyperventilate, ultimately revealing that Maggie is pregnant. The captors basically make fun of her as a soccer mom in the apocalypse. After the wounded man freaks out and hits Paula–the leader of the captors–they take him down and Maggie is taken into the other room to be interrogated by a woman with a partially missing digit.

Paula then questions why all this happened and Carol talks about how your people killed my people and they piece together that they know who RPG’d their friends but wonder why they kept coming after the rest of the group. When it is mentioned that they need to kill Negan, someone says “we are all Negan”.

Paula then gives the prerequisite bad guy speech. We learn that she was a secretary, who killed her boss when everything went zombie and that she had 4 kids. Quite frankly, it was boring and no one cared.

They arrange for a prisoner swap except that Paula is convinced it is an ambush and is trying to wait for their back-up to arrive.

Carol manages to get free, finds Maggie and tries to run. Maggie says that they have to kill them all and so they untie the wounded man’s arm, he bleeds out, then they wait for him to turn, using him to attack an older chain-smoking lady who was dying from lung disease anyways. 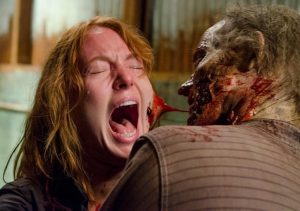 Once she is on the ground, Maggie pistol whips her to death. The carnage continues as the missing finger lady is taken down and then they wind up fighting Paula in the hall. Carol manages a combo kill and impales Paula on a giant piece of metal that is sticking out. In the midst of that fight, Maggie is almost cut across the gut, getting just deep enough to cut her shirt but not her body.

Carol is still wanting to run but they work a plan, convincing back up to go to a certain area. When they show up, Maggie and Carol lock them in a room, then light gasoline so they burn to death. Rick and the rest finally arrive, then Rick kills his prisoner, Primo, after he says “We are all Negan.”

What is happening with Carol? The show doesn’t seem to be wanting to give anything away but the truth is that we are left wondering if Carol has really cracked or if she was just showing off in some way for a strategical advantage.

I am not sure why she has suddenly gone soft. From the prison burnings forward, part of what made Carol work is that she had gone from a meek abused housewife to a strategic, do whatever it takes killer. Think about the “Look at the Flowers” moment. In her current state, I am not sure Carol can do that.

Even from earlier this season when she went on a kill streak when the Wolves attacked, there has been a huge arc and change and, thus far, they haven’t really showed us why. There are hints that it is tied to Maggie’s child in some way but it isn’t fully developed. All of that to say, Carol is the most likely character to get killed in the season finale. The sudden change and focus on her feels like we are being set up and, sadly, there is no dumpster for her to hide under. 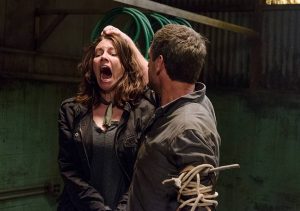 The “We are all Negan” thing would be really interesting except that the show made such a ridiculously big deal about casting that role. The person playing Negan hadn’t even filmed scenes yet and was on daytime television shows talking about it. I know that isn’t necessarily tied together but it is an interesting plot idea that the publicity for the show has ruined for fans.

There will be a reckoning. For the first time, someone pointed out to the group that what they are doing is pretty evil. At this point, taking away the Saviors that Daryl lit up, they have killed 25+ people maybe in cold blood who had never done anything directly to them. It is hard to root for them on this task of wiping out their friends’ enemy. And Gregory is so shady that I have no idea whether or not he will ultimately honor what he promised.

Alicia Witt was great as Paula. In the same way that they used Ethan Embry earlier this year, I like the casting of really good actors and giving them the chance to act well and die well. I will say, her monologue was dumb and didn’t do much for me however.

A 5.5 out of 10. Sad to say, if the rest of the season is going to head along these lines, then I am ready for the finale, with the hope that the writers and showrunners can take a breath and reset their bearings. Because it feels like they are wildly chasing character changes and ideas that don’t make any sense to me.