So, after last week’s episode where Maggie and Rick made an alliance to serve as protectors of the Hilltop community, we basically know where this episode is going. Let’s recap and review The Walking Dead episode 612: Not Tomorrow Yet. Spoiler alert: there is a lot of death.

[divider] The Walking Dead Episode 612 Recap: Not Tomorrow Yet [/divider] 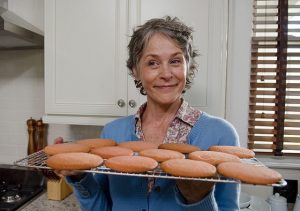 Carol is a linchpin to the whole episode. It opens with her collecting acorns, ruining a white shirt with walker splatter, and making beet and acorn cookies, which she uses to share with Tobin, who she later smooches before the big deal of the episode happens. And at some point, we see Carol has a running tally of people she has killed, which sits at 18.

When Rick and crew get back, he assembles everyone in the church to outline what is going to happen, and how they are going to hunt down the Saviors and take them out because “this is how we eat.”  Morgan is clearly upset about it and is wondering why Carol never turned him in for keeping the Wolf alive. Carol explains that she didn’t want it to turn on Doctor Denise, who you remember was treating the captive Wolf.

Carol and Tobin get together when he tells her that she is a “mother to everyone”, which is weird if you think about it too long.

The plan for the raid is to find a zombie that looks like Gregory, decapitate the zombie, then deliver it in the middle of the night when it is dark. And the plan works. Daryl kills one guard, the captive Hilltop guy is freed, Michonne samurai swords the second guard and then the group goes into the compound, sneaking into rooms and killing people like they are walkers. 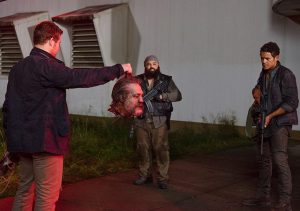 We see Glenn take over for Heath, who clearly is having a hard time killing a real person. Sasha and Abraham are taking out people as well when a guy wakes up and the fire alarm is pulled before they can take him out.

It all breaks loose after that, with lots of shooting. Heath and Glenn make it to the armory, which essentially changes the course of the fight.

But in the darkness outside, Carol and Maggie have a conversation with Carol wanting to have Maggie stay. We don’t know what happens until the end.

As Team Rick comes outside, a lone guy makes a break for it on Daryl’s motorcycle. They take him down and are getting ready to execute him when a call comes over the radio. A woman says that they have Maggie and Carol captive.

[divider] The Walking Dead Episode 612 Review: Not Tomorrow Yet [/divider]

So, I will be frank. This is a terrible episode. I give it 3 out of 10. (Feel free to fire your hate mail at me in the comments.) And while I think it was pretty engaging visually and there was a lot to like there, the story and plot failed. Royally.

Here is why I dislike this episode so much: it marks a change in the group for the worse with no real explanation of why the change HAS to happen.

I think part of why the episode was Carol rich is this: she knows it is a dramatic change. They are moving from being people who do whatever it takes to survive to people who hunt and kill for others. And that is a huge step to take and I don’t think that they did the legwork to make it seem real. 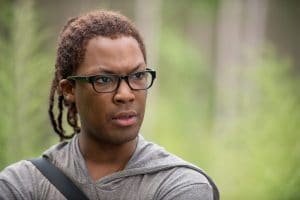 First, they have done nothing to show that the group was struggling with food. I mean, while I would cancel our friendship if you tried to serve me an acorn and beet cookie right now, this ain’t the apocalypse.

They seem to be readying to raise crops. Maggie grew up on a farm; Eugene seems ready to play the role of scientist/farmer. So when Rick says “this is how we eat”, the storytellers of the show did nothing to show that they are at a desperate point. It wouldn’t have taken much over the last 2-3 episodes to have me believe it but I needed something to make me buy they are desperate.

Second, some of them know they are crossing a line. Carol’s prominence is because she know that this is a line that they can’t come back from. Once they essentially become murderous mercenaries, then it changes things. It is why Carol wants to keep Maggie clear and free. It is why Glenn kills the second man when Heath couldn’t.

This is a big deal, a line that they are crossing. I think the writers wanted to emphasize that with Gabriel’s weirdo scripture quote but it wound up being silly.  When we met the Governor, the line that marked him as evil was that he wanted to kill the people in the prison for simply existing too close to Woodbury. If I am Tara, other than an aquarium full of zombie heads, there isn’t much of a difference between Rick and this mission and the Governor and that prison attack.

Third, it was a crap plan. Why not send a few people in to quietly assess things? Daryl and Jesus check it out, get to the armory, and then you are shooting people stuck in a hallway from both ends. Worse case, your two scrappiest guys get caught.

Now, because things went sideways, they are all captive in a courtyard looking execution zone and the list of people who can come save them is really, really small. If Morgan takes a break from building the cell he is constructing, he and Carl save everyone? That is hugely unlikely. And most everyone else with that skillset is already on site in the crossfire.