Who wins the comic book fight between Wolverine and Iron Man?

Who wins it? Wolverine vs. Iron Man

As Tony finishes the arc he began with his boot thrusters, metal meets metal. His fist, Logan’s face. Wolverine arrests his backwards momentum with his claws, leaving six long furrows in the earth. Even before he comes to a full stop, he plants both feet and launches himself back towards the Iron Man armor, claws forward. This move packs a much bigger wallop when Colossus is the means of propulsion, but it’s still battle proven.

Stark smiles beneath his visor.  Oh, Logan. You’re an old dog in desperate need of some new tricks. He leaps over the assault, firing a well-placed repulsor beam to the back of Logan’s head – driving him face first into the ground with enough momentum to carry him fifteen yards further. Logan gathers himself, turning an already healing face back to Tony, only now the snarl is more defined. Harder. More teeth. Tony suddenly knows how it feels to be a matador.

Logan charges, deciding to keep his feet on the ground this time. More opportunity for evasion and leverage. Tony fires a volley of repulsor blasts from his palms, but Logan deftly dodges, leaps, and closes the gap. Tony’s boot thrusters fire, but Logan is ready this time. He rakes his adamantium claws across the bottom of Tony’s boots, disabling the thrusters. The smell of singed hair and burned flesh hangs in the air, but Stark falls and Logan pounces, taking control of his back.

Wolverine is no stranger to Tony’s suits. He targets the shoulders – slamming his claws down and through the alloy, avoiding flesh but disabling the machinery responsible for movement and strength enhancement. Tony tries his thrusters once more in an attempt to rocket out from beneath Wolverine. Not good!  Not good!  “Fire flares.” Two panels open behind his trapezius muscles and fire a salvo right into Wolverine’s face. He screams, blinded, withdrawing his claws and covering his face. Good thing I brought backup. In the seconds bought, Tony sheds the disabled suit, commands Jarvis to deploy a second from a nearby aerial pod, and steps into it. So he thinks I have to fly to win, huh?

No sooner does he finish the thought and the visor closes than it is met with a tooth-rattling, reinforced haymaker. The hits keep coming and damage reports begin to flash on his HUD.  Nothing major yet, but Logan seems to be slicing with a surgeon’s precision. Greens are shading towards yellows and yellows to orange. “I could use a little help here!” 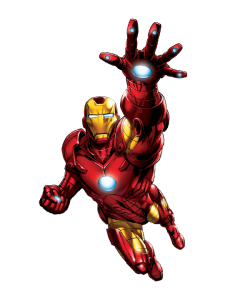 Another suit deploys from the pod and joins the melee with Jarvis piloting. Logan wonders briefly why Tony insists on keeping the fight on the ground. He’s too damn proud, he thinks. Hubris. That thing that usually comes before a fall.

He doesn’t hold back on the drone suit. His claws pass in, out, and across the second armor as precision begins to give way to indiscriminate slashes and stabs borne out of urgency. It raises a hand with the whine of a charged shot. Logan pinions the arm and the shot hits Tony squarely in the chest, sending him to his back. Logan then relieves the suit of its hands before doing the same with its head.

Iron Man’s HUD is a veritable rainbow of strobing warning signs and failures. With Logan preoccupied, he manages yet another armor exchange; the battlefield now littered with the husks of three of his suits. Logan advances, oil dripping from his claws and spattered about his body. His clothes are riddled with holes but the flesh beneath them is closing.

He heals, but it still hurts. He’s pissed. His advance is met with a jet-propelled spear. The ground disappears beneath him for a moment as he thrashes against the vice-like grip of Iron Man. Then it reappears.

Tony is fighting with abandon. He peppers the dazed X-Man with everything he’s got, moving too quickly for Logan to track. Claws lash out and find only air as blows and beams land all over his body. Stark’s HUD shows power reserves quickly draining, but he’s sure that this siege will seal the deal.

Wolverine’s taking damage far more quickly than he can heal it. Respect for Iron Man’s capabilities is quickly replaced with fear, and the fear kindles within him something primal. He needs to end this and end this now.  Adamantium claws flash through the air and find a new home. Blood slowly winds its way down his forearms as he lifts Stark, his claws knuckle-deep in both his shoulders.

Before Logan can finish his sentence, Stark’s uni-beam fires nearly point blank into his face. 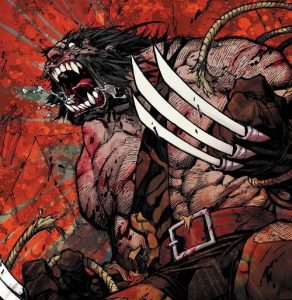 Logan stirs back to consciousness. Or was it back to life? It hurts either way. His vision restores slowly and painfully from black to blurred then aright once more.

There lay Tony. His visor is open, his power completely depleted. He chuckles. “Aw man.  I mean, I figured you’d get back up from that eventually, but I was really hoping I’d be gone when you did. That was fun though, wasn’t it? Me with the blasting. You with the getting blasted. One question though: How’d you know this was my last suit?”

“Consider it yours, too,” Logan says, retracting his claws and turning to leave.  “You’re helpless. It’d be an easy thing to kill you now.”

Then, after a pause, Stark’s eyes jump with an idea.  “Hey, how about next time we make this a ménage à trois?  Me, you…and Veronica.”

“Finally.” Logan smirks, turns his head, and spits a mass of blood and other bits to the ground as he speaks over his shoulder.  “A fair fight.”

This was our closest vote by far!  Wolverine only narrowly won with 51.2% of the votes to Iron Man’s 48.8%.  We tried to keep the fight as close as the voting margin and we’re sure this result will prove the most controversial of the first round barring an upset, but Logan moves on to round two while Stark is left to pick up his many pieces.